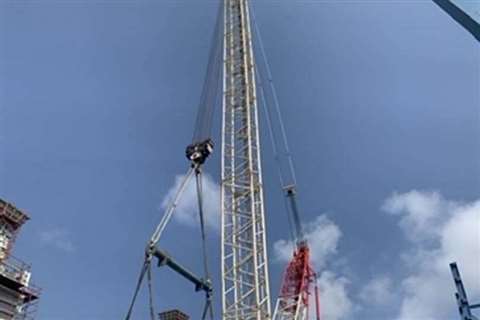 Despite Covid Setbacks, Sarens Pulls Off A Success In Ghana 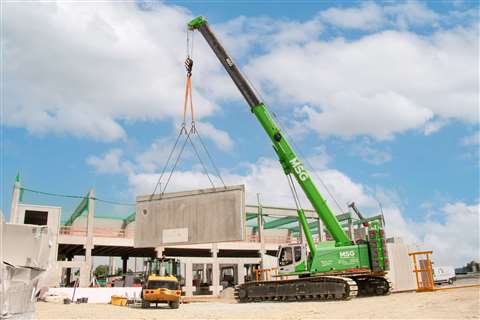 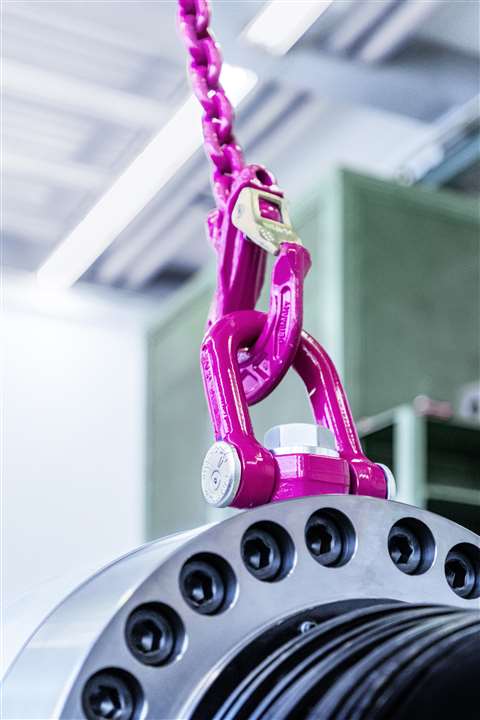 Two years ago, the German premium supplier of lifting and lashing technology RUD launched the RUD ACP-TURNADO – an “intelligent” centric lifting point that always immediately turns in the direction of force when the load is lifted. The advantage: no sudden sagging and thus more safety for the load, crane and load handling equipment. Now the company from Aalen is presenting its RUD ACP-TURNADO in new variants for even greater load weights. It is starting with bolt sizes M36 and M42 as well as 1 ½” and 1 ¾”, which are available as of right now. An RFID transponder to simplify equipment checks is serially also installed.

The immediate turning of the RUD ACP-TURNADO in the load direction prevents the lift bail from coming to a dangerous standstill and the associated high shear forces. This also eliminates the feared sudden reversal of the suspension bail, which can lead to damage to valuable loads, but also to lifting means and crane brakes. “Thanks to the new bolt sizes and the correspondingly higher WLLs, we have been able to significantly expand the range of applications for the RUD ACP-TURNADO,” explains Hermann Kolb, Divisional Manager of Sling & Lashing Units at RUD. 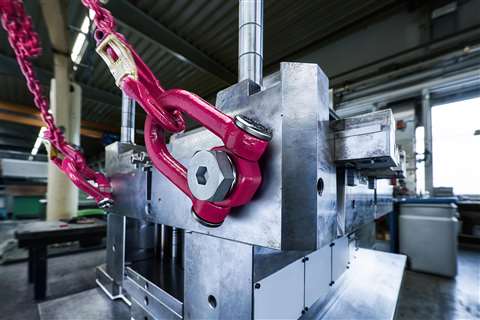 No lift bail stopping possible
According to Kolb, the RUD ACP-TURNADO eliminates two known weaknesses of conventional centric lifting points – regardless of the size variant. If their U-bar stops in the so-called “worst-case position” when the lifting point is installed 90° from the side, it is exposed to large shear forces and bending moments. This can result in damage or even breakage. As soon as the bracket then turns out of this position, the load usually sags down suddenly. “With the RUD ACP-TURNADO, this is prevented by a special spring mechanism,” emphasises Hermann Kolb. It prevents the often fatal 90° position of the lift bail by inevitably turning it in the direction of the optimal split force introduction before lifting. “Seen in this way, it is actually an ‘intelligent’ lifting point,” Kolb explains. “It makes the user’s work considerably easier and safer.” 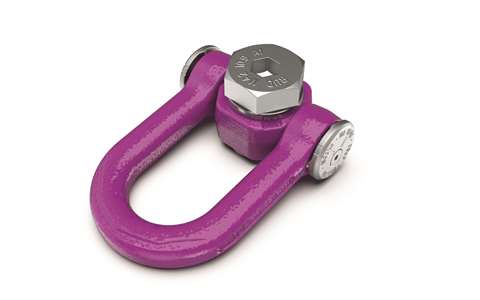 New design development for large bolt diameters
According to RUD, there has been considerable development and innovation effort behind the new sizes of the RUD ACP-TURNADO. The engineers’ goal was to transfer the recognised advantages of the RUD ACP-TURNADO to larger variants for higher WLLs. This required a new technical solution. The heart of the RUD ACP-TURNADO in the sizes M36, M42, 1 ½” and 1 ¾” is therefore the completely new developed spring mechanism. Unlike the previous versions, it is now located on the inside. This means that it is well protected against pollution. 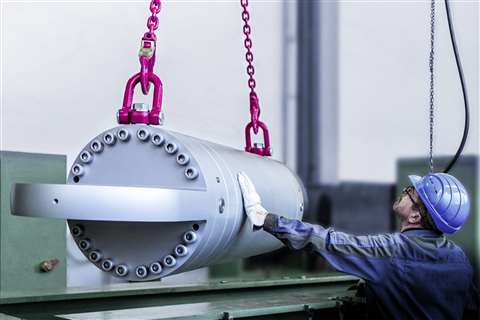 Captive but replaceable bolt
In addition to safety-relevant aspects, the RUD ACP-TURNADO also offers handling advantages. Like the sizes M12 to M30, the large versions have a swivel joint in the U-axis as well as an exchangeable combination head bolt with internal and external hexagon, which enables optimum handling. It is captive and yet replaceable: a useful product feature in everyday use. In addition – instead of a standard thread length across several sizes – an adapted thread length is available for each dimension. And wear lenses at the critical points of the lift bail make it easy to assess whether the lifting point has already reached discard maturity.

A new feature is the deflector disc, which has, among other things, an angle marking; this makes it quicker and easier to estimate the applied lifting angle. In addition, the WLL specification in “t” and “lbs”, the safety factors 4:1 and 5:1 and the torque moment are pressed onto the disc, which means that the lifting point fulfils the requirements of the American standard ASME B30.26. 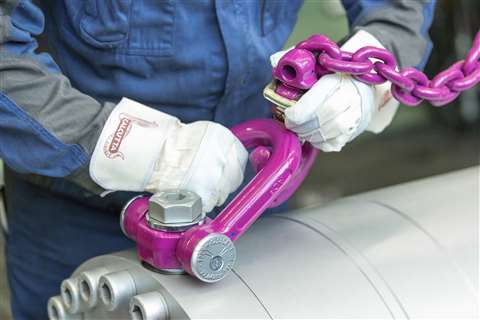 New application possibilities
Already in the bolt sizes M12 to M30, the RUD ACP-TURNADO had the best prerequisites for use in industries such as mould making, tool making, automotive, mechanical engineering as well as in the energy and offshore sector. “With the new sizes M36 and M42, it now also qualifies for applications in power plant construction and industrial construction, for example,” says Hermann Kolb. “Simply everywhere where safety, high WLL and optimum handling have top priority.” With the newly added variants, the RUD ACP-TURNADO is now available in bolt diameters M12 / ½”, M16 / 5/8”, M20 / ¾”, M24 / 1”, M30 / 1 ¼” as well as M36, M42, 1 ½” and 1 ¾”. Other sizes from M48 to M100 are to follow shortly, according to RUD.

Precast concrete assembly with 120 t telescopic crawler crane: Construction of a new logistics hall
MSG Krandienst GmbH from Kehl in Baden is a supra-regional crane service provider that, in addition to crane rental, also specializes in heavy transport and the organization of related project logistics. Not far from SENNEBOGEN’s plant 2 in Straubing, the crane rental company is now making its 120 t 6113 E telescopic crawler crane available for the construction of a logistics center, providing the perfect tool for use in precast concrete assembly.
Long Reads