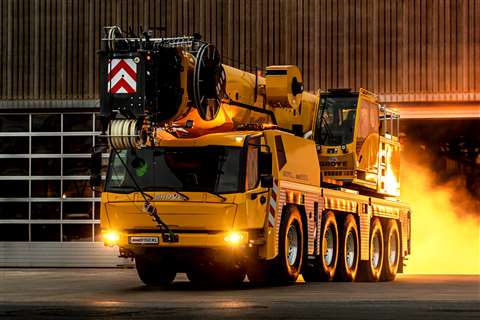 Boasting a boom that puts AT cranes enjoying an extra 70 t of max. capacity to shame, plus load charts that other 150 t (175 USt) models can only dream of, the new Grove GMK5150XL is already reigning supreme. But it wields its power wisely, with a drivetrain that makes it the most fuel-efficient crane in its class.

When Manitowoc customers caught their first glimpse of the Grove GMK5150XL all-terrain crane at Crane Days 2021, no doubt most of them were focused on its incredible 68.7 m boom that even leaves 220 t models struggling to compete. At 8.7 m longer than even that of the GMK5150L-1, its seven-section TWIN-LOCKâ boom delivers load charts that are unmatched by any 150 t-class competitor, most notably enabling the handling of 8.1 t at full extension and offering a 99 m maximum tip height.

But now, almost a year on, one of the features that they may have initially overlooked has taken on far greater importance. With diesel prices hitting record highs worldwide, the Grove single-engine design — which typically lowers fuel consumption by 30% — has never been more essential. In fact, when its Mercedes Benz OM471LA 6-cylinder engine is operating in ECO mode alongside the 16F/2R Mercedes transmission in Fuel Saver Mode, the GMK5150XL is the most fuel-efficient crane in its class, too.

The 390 kW (523 hp) engine is also approved for use with HVO 100 Diesel, potentially reducing CO2 output by 90% and opening up new opportunities to tender for eco/government projects where impeccable green credentials are often required.

From within the carrier, the engine provides superstructure operation through one simple and reliable angular gearbox, further shaving off weight to enhance load charts, while also reducing maintenance costs to a minimum.

On arrival at its destination, its slender, 2.75 m-wide physique allows access to the narrowest of jobsites. The superb agility provided by its all-wheel steer 8040 mm wheelbase and three driven axles speeds up crane setup – particularly when working in conjunction with the CCS operating system. Using the MAXbase system, the four double hydraulically telescoping outriggers can be easily set to virtually unlimited symmetric and asymmetric positions for maximum flexibility and enabling load capacities and working radius to be enhanced.

Given the crane’s huge working radius, the CCS boom configurator plays a vital role in ensuring the most efficient picks — a crucial advantage when that class-leading boom can be extended even further with a jib that is configurable up to 30.2 m with up to 40° offset. From within the new, higher-visibility cab, the GMK5150XL operator can already be planning a lift for which other cranes might still be maneuvering into position closer to the load. It’s true — the GMK5150XL rules! 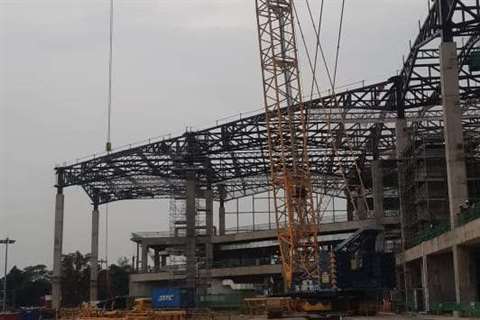