Chinese manufacturer XCMG has opened a new operation in Kazakhstan. 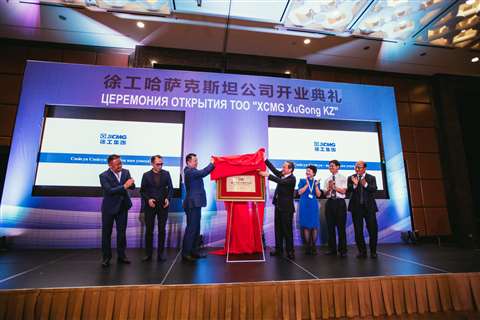 The launch ceremony for XCMG XuGong Kazakhstan, in the city of Almaty, was attended by senior XCMG executives - including the firm’s president, Wang Min and assistant president, Liu Jiansen - as well as the Consul-general of China’s consulate in Almaty, Miao Hongbo.

In his speech, Mr Miao spoke of the rapid growth of the construction industry in Kazakhstan, since the establishment of a bilateral relationship with China, some 25 years ago.

He cited China’s One Belt, One Road initiative, as well as the joint Path of Light economic policy, as significant reasons behind the growing number of projects in Kazakhstan.

In his address, Mr Wang said he saw Kazakhstan as a “bridge connecting Eurasia” and one of the most crucial global markets of XCMG.

The initial aim of the  Kazakhstan operation will be to function as a ‘one-stop-shop’ for local customers, facilitating the sustainable development of XCMG in the country.

Mr Wang said developments in the country would create a solid foundation from which the firm’s operations could radiate out through central Asia.

According to XCMG’s figures, it already ranks as the leading manufacturer in Kazakhstan, with market share of over 80%.