A look at wind turbine erection and transport projects in what continues to be one of the busiest application areas for cranes and transport equipment worldwide. Christian Shelton reports

Around 13 km off the north east coast of Scotland the £2.6 billion Beatrice Offshore Windfarm is being built. The finished windfarm will include 84 Siemens 7MW wind turbines that will generate 588 MW of electricity each year. Each turbine is constructed with a 154 metre diameter rotor and turbine height of 198.4 m. Construction crews here are working at sea depths reaching 55 m to anchor each turbine to the seafloor. Serving as an underwater foundation platform, jacket substructures are being constructed by Scottish engineering firm Burntisland Fabrications (BiFab) at heights from 68 to 81 m tall. The first 26 jacket substructures are currently being built at BiFab’s facility in Methil, Fife.

With each finished turbine anchor weighing approximately 1,000 tonnes, BiFab has utilised the services of heavy lifting and engineered transport provider Sarens to transport the offshore jackets from the fabrication facility, lift each structure into a vertical position, and load the turbine bases onto the specialised transport vessels for final positioning. “Our strategy includes using self-propelled modular transporters (SPMT) to move the jackets in a horizontal position approximately 80 m to the up-ending location at the harbour,” explains Andrew Hunt, operations manager for Sarens. In order to lift the jacket substructures into their vertical position Sarens is using its 1,600 tonne capacity Demag CC 9800 and Demag CC 8800-1 crawler cranes to carry the main load and two smaller cranes, to move the jacket into its vertical position. 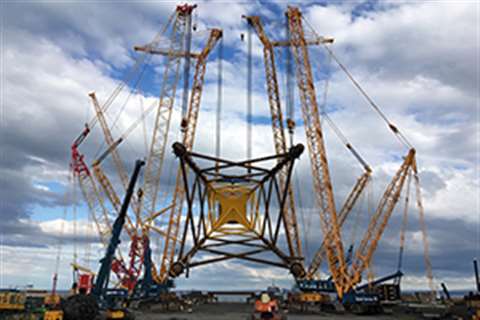 Once the crane equipment and 78 SPMT axles lines were in place, Sarens started lifting the first of ten jackets that were installed in 2017. An additional 16 jackets are planned for fabrication and installation in spring 2018. To start the process four SPMT operators transported the 1,022 tonne load 76 m to the quayside up-ending location. Sarens’s lifting crew then took over, attaching a custom-engineered spreader beam to the top of the jacket. “Both the CC 8800-1 and CC 9800 were attached to the beam, and the beam was connected to the top of the jacket platform at a single, central lifting position,” explains Andrew Hunt. “This allowed the two cranes to evenly share the load.”

Working at a 20 m radius, both the CC 9800 and CC 8800-1, respectively, began hoisting the load in slow increments toward its final positon, slewing slightly during the process. At the same time, the two tail CC 2800-1 cranes attached to the bottom of the jacket’s legs began to hoist, slew and track toward the two main lifting cranes. “For this operation, the tail cranes were equipped with 66 m of main boom and 100 tonnes of counterweight and hoisted the jacket legs at a 25 m radius,” says Hunt.

As the offshore jacket transitioned to its vertical position, the load was transferred over to the main CC 8800-1 and CC 9800 cranes. The tail cranes started slewing the jacket into its final vertical position until the full 1.022-tonne load was shared between the main lift cranes. In total, it took four crane operators and six banksmen 1.5 hours to up-end the jacket from its horizontal position.

For the next round of jacket handling at the harbour, Sarens’ Demag CC 8800-1 will be re-rigged with the Demag Boom Booster Kit, which increases crane capacity when working at steep boom configurations. The wedge-shaped Boom Booster’s design includes 11-metre-long lower and upper adapters that flare out to a 10 metre width, nearly three times the standard boom’s width, to enhance structural integrity. Up to five, 10-metre-long interior boom segments can be added to provide up to 72 metres of lift-enhancing boom structure. “We plan on using the full 72 m of the Boom Booster for this project,” says Hunt. “Jacket weights will increase to over 1,200 tonnes each requiring the CC 9800 and CC 8800-1 to have 800 tonnes on each carrier. On top of reconfiguring the CC 8800-1 with full Boom Booster, we will add Superlift ballast to both cranes to handle the extra load”.

According to Sarens’s Mariusz Sudol, wind division and country manager, Poland, business in the wind farm sector is booming for the company. “We are currently working on around 20 wind farms in and around Europe. We have invested in a dedicated fleet of cranes specifically to meet this demand. From Liebherr we have an LG1750 SL12, as well as a brand-new LG1750 SX. From Terex we have CC 2800-1s, TC 2800-1s, and LR1600/2s. We chose these cranes because they are fast and easy to assemble, which makes them ideal for wind turbine erection. We also have a range of hydraulic cranes dedicated for servicing wind turbines, such as Liebherr’s LTM1750 and Terex’s AC700.” 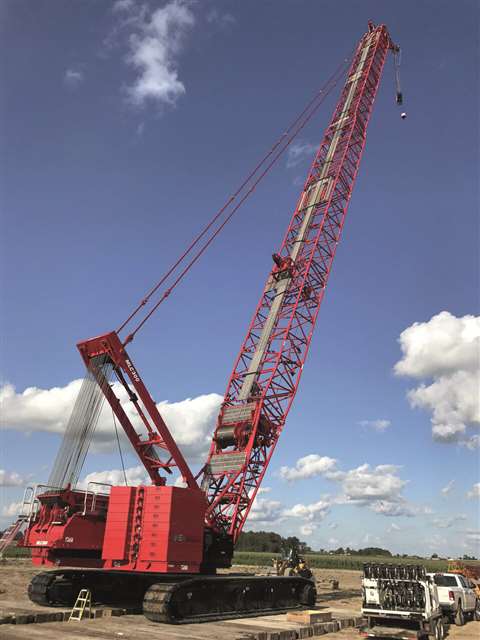 The Clinton, Indiana-based construction firm used the 300 tonne capacity crane to build 30 wind towers for the Hog Creek Wind Project in Ada, Ohio. Once complete this will provide 66 MW of electricity to the surrounding area. According to Manitowoc, despite being used on hilly, uneven ground, the MLC300 FPC enabled White Construction to finish three weeks ahead of schedule.

“We chose the MLC300 FPC because of its extra capacity compared with competing lattice boom crawler cranes,” says Jason Ruggles, director of crane operations for White Construction. “Combined with its smaller footprint, the crane enabled us to easily manoeuvre around the hilly terrain of the wind farm and complete each lift.”

According to Manitowoc, the MLC300 FPC was introduced to give customers the capacity and compact footprint benefits of the original MLC300 but without the additional investment in features and moving parts that come with VPC. For the fixed-position counterweight configuration, the VPC trolley and tray have been replaced by a two-position, stationary counterweight tray.

Goldhofer says it developed the FTV 500 in response to the logistics requirements presented by the increasing size of wind turbine rotor blades.

The FTV 500 has a load moment of up to 500 tonnes and Goldhofer says it is suitable for handling a range of rotor blades including: the Enercon E-138, which has a length of about 68 m; the Vestas V 150, which is now in the final development stage and will have a length of approximately 74 m; the Senvion RE 68.5; the Nordex NR 74; and the Siemens B69.

The rotor blade adapters produced for the FTV 300 can also be used with the FTV 500 and the new version provides many of the same features of the FTV 300 including: the same 60-degree maximum tilt angle for negotiating tight bends or passage under bridges and power transmission lines; and 360-degree rotation around its own axis for dynamic adjustment of the angle of pitch depending on the direction of the wind.

Goldhofer says the FTV 500 can be used in combination with self-propelled transporters and with pulled trailer combinations.

The company can also provide support in planning and handling challenging wind turbine transport operations to ensure  components are moved efficiently and safely.

An order to supply platform and nacelle cranes for the Trianel wind farm Borkum II in the North Sea is the latest in a round of new business for Palfinger Marine.

The wind farm around 40 kilometres north of the island of Borkum comprises 32 Senvion 6.2M152 wind turbines with the capacity to generate about 200 MW hours of electricity.

As crane supplier for all the turbines, Palfinger Marine will deliver 32 hydraulic foldable knuckle boom cranes type PK40002M to be installed in the nacelles, and 32 electro-hydraulic straight boom cranes (type PSM400) to be mounted on the platforms.

The nacelle cranes will be handed over between July and December 2018. Delivery of the DNV GL approved platform cranes is scheduled between February and April 2018.

Another big order for Palfinger Marine in 2017 is the delivery of 87 platform cranes for Germany’s largest offshore wind farm project under construction. In its role as main contractor for engineering, procurement, construction and installation (EPCI), Siemens awarded Palfinger Marine the contract for the delivery of 71 fixed boom cranes (type PF8000) for the Hohe See wind farm and another 16 model PF8000 fixed boom cranes for the Albatros wind farm.

Both wind farms, far out in the North Sea, are being constructed as a joint project by EnBW. Together, they will have the capacity to generate 610 MW-hours of electricity to supply around 710,000 households with renewable energy. The fully electric PF 8000 platform cranes have an outreach of 2.9 metres. Deliveries for the Hohe See project will run until the end of 2017. All 16 cranes for the Albatros wind farm will be handed over in February and March 2018. n