Which is the best tower crane? Part two

Is it low top or flat top tower crane design that is leading the way in the high-capacity tower crane classes? Heinz-Gert Kessel reports in the second part of a two-part feature.

According to Chinese manufacturers, who dominate the heavy lift flat top tower crane market, the proportion of prefabricated construction will rise from 15 per cent in 2020 to 30 % in 2025. 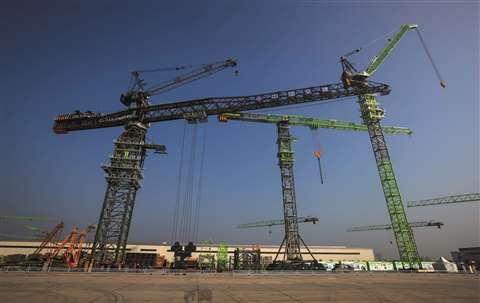 Large infrastructure projects, like long span bridges and high-speed train stations, need mega flat top tower cranes. According to Zoomlion, in 2021 sales of its tower cranes with a 600 tonne-metre rating or more, increased by 100 %.

Coal-fired power projects will decline and there may be less demand for 2,000 tonne metre class flat top cranes. It could lead to a downsizing of mega crane design features for general precast construction in the 800 to 1,200 tonne-metre class.

Another trend in ultra-heavy capacity, custom-built flat top tower cranes is for large bridge pylon construction projects. It is demonstrated by the Zoomlion W12000- 450. The 450 tonne capacity heavy lifter with an under hook height of up to 400 metres, addresses job sites which cannot be served by large mobile cranes.

In the energy sector wind turbine installation is a new tower crane market where high capacity luffers have been developed by XCMG, Zoomlion, Yongmao and Jinli Heavy Technology. These offer up to 200 tonnes capacity, in many cases using the tower system originally developed for large flat top cranes.

Zhongsheng Construction Machinery (Nanjing) Heavy Industry (ZS) was founded in 1993 and specializes in production, sales and leasing. It introduced the inverted triangle boom flat top crane design where the hoist is placed on top of a rectangular counter jib. It means the hoist rope is reeved on top of the complete boom with one or two rope pulley supports to the jib end section. ZS quickly adapted these design principles to high-capacity cranes like the ZSC70240 in the 2,000 tonne-metre class.

By 2008 nearly 40 large tower cranes above 1,000 tonne-metres had been built. In 2009 an improved design was described in the patent CN201495051 which lays the foundation for most Chinese-built heavy lift flat top cranes above 50 tonnes capacity. Examples include Finehope, Jinli Heavy Technology, SYM, Shen Yang BAO Quian, Yongmao, XCMG and ZhengZhou Kerun.

Most importantly it is claimed that the jib cross section design of an inverted triangle reduces the weight and size of the trolley. It is a monorail trolley which raises capacity of the crane because it reduces overall dead weight. This Chinese design feature on a 2,100 tonne-metre class flat top crane with 80 metre jib compared with a 1,400 tonne-metre class European low top crane with 80 metre jib, offers a 50 % higher tip load. 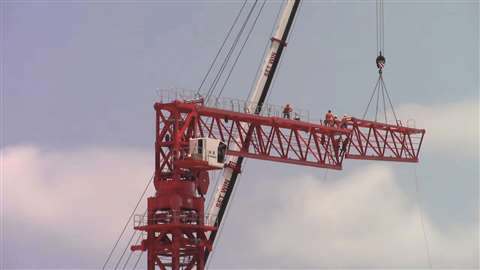 Yongmao demonstrates jib erection section by section on its STT1330 with 64 tonne capacity and 12 tonne tip load at an 80 metre radius. (Photo: Yongmao)

The almost double load moment means an inverted triangular jib is 36 % heavier but the trolley is 6 % lighter than on a 1,400 tonne-metre crane.

Like any other flat top crane design the jib is self-supporting. It means tension always occurs in the upper member and compression in the lower members. This applies no matter where the load is along the jib. Forces in the jib sections will always act in the same direction which considerably reduces fatigue. Application of a tubular web member connecting the two upper chords with the lower chord reduces wind load.

It is essential for large flat tops to have easy jib installation high up in the air. Hinge pin connections of the jib segments and no jib pendants reduce rigging time and labour. At the same time the safety of installation work at height is improved. To reduce the size of mobile crane needed for assembly the jib and counter jib can be added separately to form the upper crane. An 80 metre jib typically comprises nine jib sections, the first three of which are the heaviest. The 12 metre long base boom section is likely to be the heaviest. In the 2,000 to 2,500 tonne-metre class this is a 25 tonne to 28 tonne load.

If the jib length has to be changed during a project this can be done without an assist crane. A derrick on top of the jib can lower boom sections one at a time. It just means redirecting the hoist rope and moving the derrick over the wide boom top. Riggers can also use wide access platforms on top of the boom to remove or install the hinge pins.

What changes have been made to heavy lift crane designs?

Changes have been made on recent heavy lift crane designs to reduce the dead weight of the base jib sections. Doubler chords are used at the top of the inverted triangle jib sections. A further benefit of doubling up means smaller pins can be used to connect the jib sections.

In this way even a 2,000 tonne-metre class crane with 80 metre boom and a 50 metre free standing height can be put into service in just four days. In contrast to older models, the hoist rope is now reeved using a single pulley in the top of the second jib section.

With the location of the hoisting winch on top of the rectangular counter jib, the benefit of a great fleet angle remains for the hoist rope. It means a wide hoist drum can be used, unlike on a conventional tower head, or low tower head, design. This is due to the long distance between the pulley in the jib and the hoisting winch on the counter jib. In addition, it means rope capacity can be increased.

A further benefit of the Chinese flat top design is with a double hoisting winch for a super heavy duty application. It is afforded by the basic principle of placing the winch platforms on top of the rectangular counter jib and the limited number of support pulleys needed to guide the hoist rope.

A double trolley arrangement can be used to increase capacity. More bogies mean less pressure on the single frame rails. A lightweight design for the double trolleyversion means less dead weight and more capacity. For heavy load operation a balance beam connects the blocks of both trolleys.

Trolley winch and wire tensioners are inside the rectangular counter jib. It is also likely the electrical cabinet has better access due to wide counter jib walkways. For more flexibility some designers choose a modular counter jib, comprising more than two parts. It allows different lengths to correspond with the boom length. This is a feature that will become more evident when large cranes are no longer serving the mainly massive power station sites with 70 or 80 metre jibs. In recent years these cranes were mainly used on increasingly large power station projects. The correspondingly large luffing jib cranes, mainly built by Finehope and ZhengZhou Kerun FZQ, reached their economic limits.

On 800 to 1,000 MW power plant projects the area to be covered by the tower crane is too big for a luffing jib type. Very long boom combinations would exceed the load of the actual tower system and slow down long-radius movements. In addition to solving the reach and capacity issue, changing the crane type to a modern hammerhead offers further benefits. An inherent one is that it offers a precise horizontal load path.

It also allows the existing large crane mast sections to be reused, it reduces energy consumption and the rigging cost is lower. In addition, the modular design of the heavy lift flat top crane allows application in large scale general construction projects and infrastructure projects where big luffers will similarly be inadequate.

Large 1,000 to 2,600 tonne-metre class Finehope, Jinli Heavy Technology cranes with up to 150 tonnes lifting capacity use the well proven FZQ series tower system. It is a tubular truss structure to reduce the wind load. As on the FZQ luffers a pedestal-adapted box-type cross base with large outrigger pads is available. It reduces the foundation costs.

Jinli Heavy Technology and Yongmao have developed some particular heavy duty tower crane cross bases. A central main structure or one of the four beams with half beams are connected via pin shaft connections installed using hydraulic pin pullers. Transport dimensions are reduced and the rigging procedure of the base section is simplified. 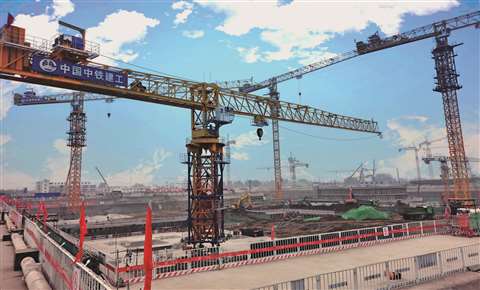 The latest designs have a lower height jib to address this general issue with high capacity flat tops. Unlike designs with a rectangular base boom section, the inverted triangle jib allows road transport as a wide load but at reduced height. Thanks to the monorail arrangement of this boom type the width and height of the sections can also be reduced for the outer jib sections.

If, however, the inner boom sections exceed a height of 5 metres a 3 metre wide road transport is no longer feasible in most countries. Another solution needs to be found for cranes above 5,000 tonne-metres. Aside from splitting jib sections which quickly leads to high installation costs on site, another solution is a double boom, similar to that on large crawler cranes.

Again, the inverted triangle jib has the benefit seen in a patented jib design by the Shenyang Jianzhu University in 2017 for so-called ‘super large’ tower cranes. It is based on a massive flat head tower crane with two parallel inverted triangle booms and two monorail trolleys.

Each trolley on the double arm boom has a separate hoisting winch on the counter jib. The trolleys can be operated independently on both booms, forming two separate lifting systems on one tower crane. Their hook blocks can also be connected by a spreader beam and the trolley can be moved in synchronised mode.

To double the capacity again, a double trolley arrangement per boom could be imagined. In synchronised operation four trolleys would be moving a super heavy load. Sophisticated crane control would be essential for such a modular system.

The university study proposes laser distance measuring devices with real time relative distance measurements of the trolley movements to ensure synchronous operation. In contrast to this challenge, connecting two parallel booms to form a structural unit is simple. In this case parallel upper chords of the two booms are connected by shear pins while the two lower chords are connected by horizontal web members. 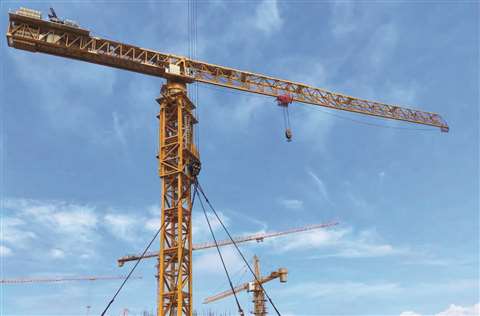 This manufacturer was originally part of the State Power ZhengZhou Machinery Design & Research Institute. It delivered nearly 100 heavy lift tower cranes under the name of ZhengZhou Kerun. The well proven 1,400 tonne-metre to 2,600 tonne-metre class PZQ flat tops for the power industry are now complemented by the all-new 3,600 tonne-metre class JL3600. It offers major improvements as outlined below.

As a modular crane it uses the same tower system for the heavy lift luffers specially designed for the growing fast track wind turbine installation market, in addition to large flat tops. The 133 metre free standing tower system for up to 4,000 tonne-metre class cranes is based on a 3.75 x 3.75 x 7.52 metre tower.

It has tubular legs and diagonals to reduce wind load, in contrast to the widespread use of massive tower sections by other crane manufacturers with H-shaped steel lattice frameworks. Instead of “Hafu” mast coupling elements which get heavy on bigger cranes, eight bolts are used per mast corner, tightened using a standard torque wrench.

The dead weight of the flat top jib has been reduced by 10 % and its maximum possible jib length has been extended from 80 to 90 metres. Maximum capacity with a double trolley arrangement is increased from 150 to 200 tonnes. 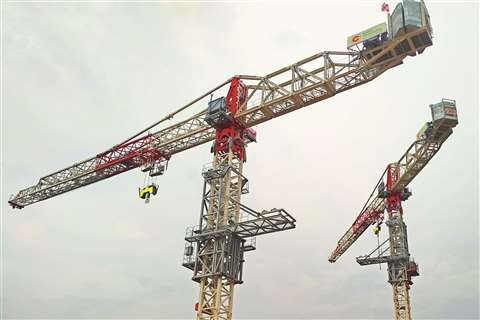 Which is the best tower crane?
In the first of a two-part feature, Heinz-Gert Kessel explores whether low top or flat top tower crane designs are leading the way in the high-capacity tower crane classes