What were the SCRA jobs of the year?

The Specialized Carriers & Rigging Association (SC&RA) announced the winners of the 2021 Rigging and Hauling Job of the Year Awards on 29 October, during the 2021 SC&RA Annual Conference in Texas, USA. ICST reports

The 2021 SC&RA Job of the Year entries were for projects demonstrating ingenuity, skill, and commitment to safety. Winners were recognised for meeting some of the industry’s most complicated challenges and responding with superior professionalism, SC&RA said.

For the rigging jobs the winners were announced in four categories and for the hauling jobs there were three winners, all as set out in the following pages. 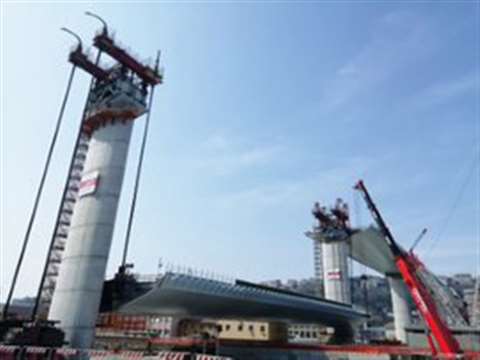 Rigging project with a value of more than US$2 million

From August 2019 to April 2020, Fagioli put all its capacity on the table in terms of equipment, know-how and engineering for the transport and installation of the new San Giorgio Bridge in Genoa, Italy.

Following the collapse of the Morandi bridge in 2018, Fagioli was contracted by Pergenova S.C.p.A. to design and build the Polcevera viaduct on the A10 motorway, for the transport and installation of the main sections of the new bridge with sections weighing up to 2,000 tonnes. Fagioli used 238 axle lines of self propelled modular transporter (SPMT), strand jacks and a tower lift system, six 1,200 tonne capacity crawler cranes, modular trailers, barges, a gantry lifting system and climbing jacks.

An average of 35 Fagioli personnel were onsite daily, with a peak workload of up to 50 people. The job saw nine months of uninterrupted work for Fagioli within the main scope, including Covid considerations and a busy jobsite with multiple operations happening at once. Set at a firm-fixed price, the job required minimal subcontractors, and realised no claims or losses, and zero accidents. 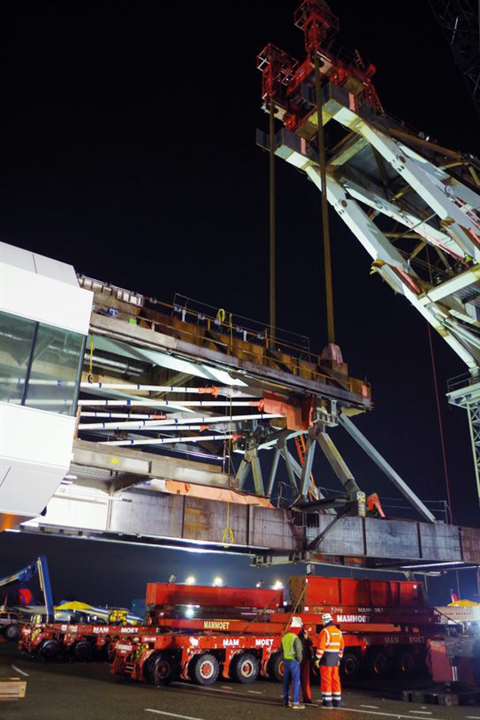 In the first half of 2020 Mammoet transported and lifted a 1,472 tonne pedestrian walkway at the Seattle-Tacoma International Airport in Seattle, Washington.

Four columns of 14 lines of SPMT were installed in a four-point configuration near the corners of the bridge span, and the transport began at midnight on 24 January 2020, after clearance was given by the Port of Seattle. The three-mile trip took nearly three hours from an assembly area, down a closed runway and between a pair of V-piers.

The bridge was jacked and staged in April before construction was completed. In addition, Mammoet installed four 900 tonne capacity strand jacks and used strand reel frames from Holland for the first time in the USA. The bridge span was lifted 22 metres at about 10 meters per hour, before being welded in place. The job was set at a firm fixed price. Mammoet executed all of its scope in-house, and there were no recordable injuries or illnesses. 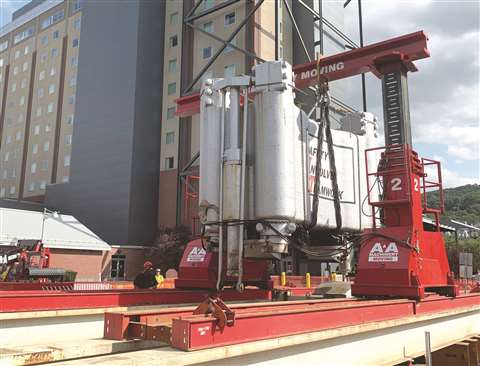 From September to October 2020, A&A Machinery Moving in the USA relocated an historically significant, 7,000 US ton capacity press from its then-current location as an outdoor monument inside a traffic circle to the nearby Smithsonian-affiliated National Museum of Industrial History (NMIH).

After lifting the crown the hydraulic gantry was removed and reset at the NMIH for reassembly. The remaining components were removed using a 400 ton hydraulic crane. Once reassembled, the cut tie-rods were welded together.

Planning the project took 10 months and the rigging scope from site preparation to completion was done in 15 days. A&A was the prime contractor to NMIH, and the job was set at a firm, fixed price. No claims, injuries or illnesses were reported. 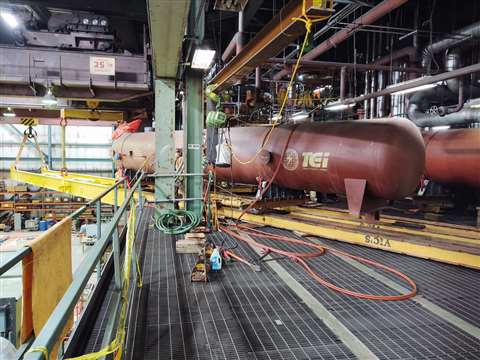 Bid on a firm-fixed lump sum, and executed in phases between January and April 2020, Vic’s Crane and Heavy Haul performed the rigging work as part of a project to remove and replace two feedwater heaters in the Sherburne County Generating Station in Becker, Minnesota, USA.

Logistical challenges appeared at every turn but the Vic’s team proposed to move the heaters to the east open area, rotate 30 degrees to align between building columns and used a slide track to move the heaters to the south west onto a sled suspended from two overhead cranes. Vic’s also unloaded the new heaters and hoisted them to the operating floor. It also provided all rigging to move them on and off the sled and transported and unloaded the old heaters to the scrap yard. The project was completed with no injuries, equipment damage or pending claims. 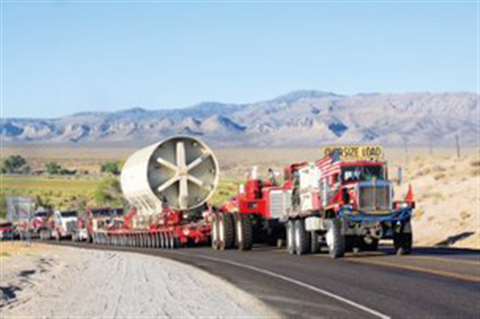 Emmert International achieved a record for the heaviest load ever moved on Nevada, USA, highway system

After completing the engineering and permitting process from March 2019 to May 2020, Emmert used a combination of Goldhofer platform THP/SL trailers, Goldhofer ADD Drives and seven prime movers, to transport a nuclear reactor pressure vessel cask (RPV) from North Las Vegas to Clive, Utah.

Between July and August 2020, the 400 mile (650 km) journey required a detailed route survey that was presented to the Nevada Department of Transportation (NDOT) for analysis. Over the course of 12 months, NDOT and Emmert identified a suitable route that entailed 7 percent grades, culverts that had to be shored up, and civil improvements, along the roadway and at railroad crossings. 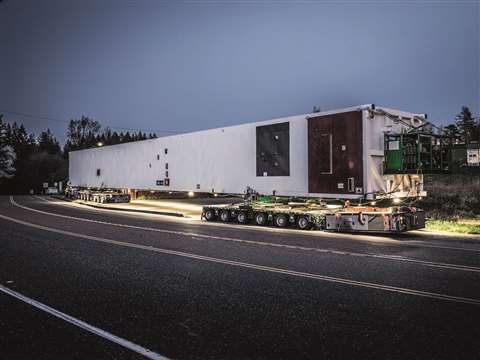 The pieces were loaded onto an Omega Morgan-provided barge directly from ship’s gear. From there, they were moved across the Columbia River into Oregon and offloaded using SPMT and placed to rest on beams and stands. Hydraulic dollies were used for the first half of the 45 mile (73 km) journey.

For the second half, the units were transloaded onto six lines of four-file K25 trailer and eight lines of two-file Goldhofer trailer, with custom bunks and turntables on both. The route, which took three nights to traverse, required unique equipment configurations, locations that allowed transloading the pieces, and extreme amounts of co-ordination to shut not only two roads, but a state highway, and jump a bridge in the same night. In addition, a many overhead cables had to be lifted and removed over the course of the project. Night congestion and traffic control was also a focus because there were more than 15 vehicles in the convoy.

The project totalled 5,384 man-hours, and there were no OSHA or DOT recordables. 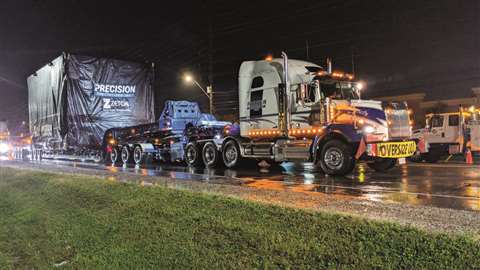 Precision Specialized executed the largest move in the company’s history

From September to October 2020 Precision Specialized was involved in the largest move it has ever executed.

It was a job that included the movement of eight modules from Oakville, Ontario, Canada, to the port of Hamilton in Ontario. Overall, Precision was tasked with assisting in the manufacturing, as well as all aspects of the transportation scope, from start to finish.

Precision used a 4-axle Western Star power unit, and a 13-axle perimeter rear steer (3-axle jeep / 6-axle dolly) trailer. While the normal routing from origin to destination is 15 miles (24 km), the final approved route for Precision was 70 miles (113 km). The job comprised 12,097 man-hours, and included complete road closures, related press releases, social media and television awareness campaigns. Despite the addition of covid protocols, challenging terrain and infrastructure in southern Ontario, the team’s focus and attention to detail led local police to admit it was the best-planned move they had seen in twenty years.

There were no recorded injuries or illnesses, or DOT recordables. The job was delivered on time and on budget.

Moving job of the year

From May to June 2020, Emmert International in the USA used the largest rail car in the world to move a 1,470,000 pound (667 tonne) nuclear reactor pressure vessel (RPV) from San Onofre in California, to North Las Vegas, Nevada.

The 36-axle schnabel rail car ultimately needed to perform more than 600 lifts and shifts to navigate the rail route. In addition, the sides of the RPV cask had to be shaved down to fit within the confines of several truss bridges. In some cases, clearance was less than an inch (25 mm).

As for routing issues, Emmert performed a railroad survey with a laser-outfitted high-rail truck, where more than 40,000 data points were taken to validate clearance. They also had to shore the San Juan railroad bridge, upgrade railroad siding at the point of origin and build new rail siding at the North Las Vegas delivery point.

There were no recorded injuries or illnesses, and no DOT recordables.