What new tower crane models are shaking up the industry?

Tower crane news this year has been so prolific we already added an extra industry update to the programme in the June issue. Here is yet another raft of new models. Alex Dahm reports

Newest of the new is a couple of hydraulic luffing jib tower cranes. Jaso’s J198HPA will be one of the biggest on the market, the Spanish manufacturer claims. With a capacity of 18 tonnes, it is in the mid-range of 200 to 350 tonne-metre models for high-rise construction in congested inner cities and other urban projects.

Conceived as an update of the J168HPA launched in 2014, it ended up being a new crane. It offers more load capacity while retaining key design features. The hydraulic ram is kept at the rear of the tower meaning the ram is fully retracted when the crane is in its out of service position with the boom raised. The 6 tonne capacity J168HPA with 50 metre reach will remain available.

The 18 tonne maximum is on three falls of rope and the maximum tip load is 1.6 tonnes at 55 metres. On a single fall with a special slim line hook block it will lift 6 tonnes maximum and 1.8 tonnes at the maximum 55 metres.

Simple and fast erection was a key focus, facilitated by optimising weights and maximising pre-assembly. As a single piece the slewing platform, turret, tower head, jib foot and hydraulic ram, with all mechanisms pre-installed, is placed in one lift. Connection is by quick connectors booth for the electrics and the hydraulics. At 12.1 tonnes it is the heaviest section but it can be separated into smaller pieces for a maximum of 6.8 tonnes.

The Jaso J198HPA’s 18 tonne maximum is on three falls of rope and the maximum tip load is 1.6 tonnes at 55 metres

In a similar vein the hoist winch is integrated into the boom which allows reeving at ground level for safer and faster erection and dismantling. All platforms and handrails are preinstalled and foldable.

Transport for the complete upper is on three trucks and a freestanding crane can be built from five transport units, Jaso says.

Winch options are a 45 kW unit offering a maximum speed of 154 m/min and a 65 kW high speed version for 227 m/min. Lebus grooving can be specified for the drum as can a secondary brake.

The first unit is tested and will be first shown by Falcon Crane Hire in the UK.

The ETH90 is designed for Falcon and the UK market, especially to tackle the persistent issue of oversailing neighbouring property. Demand has increased for luffing jib tower cranes with a smaller out of service position, Brown explains.

This crane type does not remove the problem but any reduction in the out of service radius is to be welcomed. While many luffers have a minimum out of service radius around 20 metres, this has been brought down to less than 10 metres with some recent models. Brown’s target for ENG with this latest model was 5 metres. 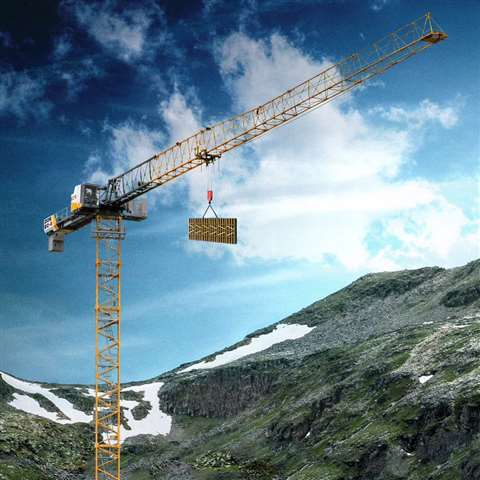 On the ENG ETH90, even with its maximum available 41 metre jib, its out of service park radius is 3.8 metres. And Brown says there are no compromises or trade offs. Full capacity of 6 tonnes (on four falls of rope) is retained with the 41 metre boom and can be increased to 8 tonnes in some situations. To achieve the minimum OOS radius a 1.2 x 1.2 metre tower is used, giving a maximum freestanding height of 38.15 metres. With its 37 kW winch the crane can be run from a 60 kVA generator (running on HVO fuel to improve sustainability), Brown says.

More often than the minimum boom radius, it is the rear counterjib slewing radius that governs the minimum overall radius. On the ETH90 the counterjib is 2.5 metres and this is maintained for all jib lengths.

Andrew Brown says, “We have identified the increasing demand for this type of machine, which is only going to intensify as the footprint of our construction sites decreases. We have worked alongside ENG to find a solution to give our customers the satisfaction and peace of mind that we have a resolution to the airspace problems which they encounter.”

ENG delivery date
Falcon has five units on order with ENG for delivery in September and October. The first unit will be erected in the first week of October on a site in Hackney, London.

Staying with luffing jib cranes and Italy, manufacturer Moritsch is very focused on its new RTL265K, says sales director Mauro Masetti. It lifts 18 tonnes and 3.3 at 60 metres and the Middle East and Asia are key target markets. The first eight cranes have already been sold for the Korean market and deliveries will continue throughout 2021. 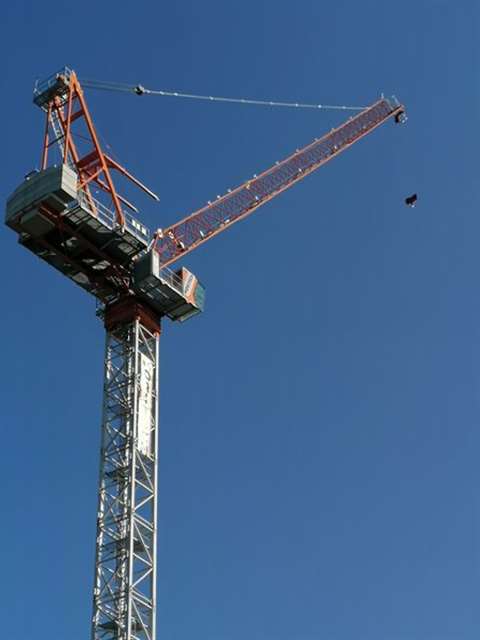 Following the successful 16 tonne RTL195 luffer, Moritsch has announced a smaller sibling is in the pipeline. The RTL155 will have a capacity of 10 tonnes, a maximum jib of 50 metres and a minimum out of service radius of 7 metres, at a maximum out of service boom angle of 83 degrees.

Looking ahead, and up the capacity scale, Moritsch is preparing to launch the 24 tonne RTL505 luffer, primarily for Asia, Australia, North America and the UK. Then there will be the larger RTL705 with 70 metre jib and 50 tonnes capacity, Masetti says.

10 tonne capacity
Moving to flat top tower cranes, August saw the launch of the 10 tonne capacity Moritsch RTM200 available with a jib up to 65 metres and a 2.2 tonne tip load. Versions can be had with 37 kW two- or four-fall winch and one with a 45 kW unit on two falls.

In the next few months, the RTM flat top range will continue to be filled out with the addition of smaller models, the 8 tonne RTM170 and 6 tonne RTM130, as well as larger models – the 12 tonne RTM250 and 16 tonne RTM300. Also on its way from Moritsch is the RTT350, an 18 tonne capacity low top model, designed mainly for the markets of North America and Northern Europe, Masetti says.

Staying with flat top tower cranes, the 205 EC-B 10 is new from Liebherr. Sales have already been reported in France and Italy since its launch in June. It is a 10 tonne capacity addition to the EC-B series with a jib length up to 65 metres, at the end of which the capacity is 2.1 tonnes. The full 10 tonnes is available to a radius of 18 metres and the jib length can be altered in 2.5 metre increments.

Instead of hammer pins a sliding type is used for connecting the slewing platform, jib and counter-jib. Liebherr says this is safer, more economical and convenient. A 45 kW hoist is fitted, as-is the LiCAB operator cabin seen on other recent models. From November 2021 another feature of the 205 EC-B 10 will be a new central control, the multi-touch display TC-OS, already installed in the 8 tonne capacity 125 K fast erector.

Another new flat top tower is the MCT 135 from Potain. Built at Manitowoc’s facility in Zhangjiagang, China, two options are available, with 6 (H6) or 8 tonnes (H8) capacity. Maximum jib length is 60 metres and the height under hook is up 50.9 metres. It boasts a compact design to allow operation close to other cranes with urban and infrastructure projects in mind. The complete top section, including full jib, can be moved in five containers. 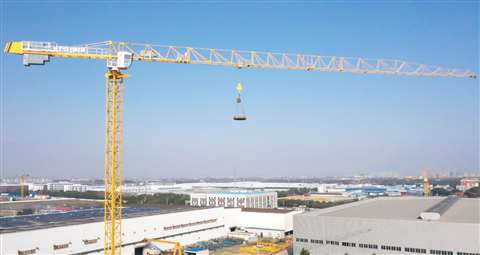 “By speaking to customers, we saw an opportunity to develop a new Potain topless [flat top] model that is optimised for congested spaces,” said Kwong-Joon Leong, regional product manager for Asia – tower cranes, Manitowoc. “The speed and flexibility of the MCT 135 is sure to make it a popular choice for contractors.”

Developments from Comansa
Flat top crane pioneer Comansa from Spain, has several recent developments, including a new 6 tonne version of the 11LC150. Improvements include better access and the Quick Set system to reduce set up and calibration time.

In addition, two models have been added to the 21LC series, as an evolution of the 21LC550. Options are 20 or 25 tonnes maximum load. They can be assembled with an operating radius between 30 and 80 metres, adjustable in 5 metre increments, allowing a maximum tip load of up to 4.95 tonnes. 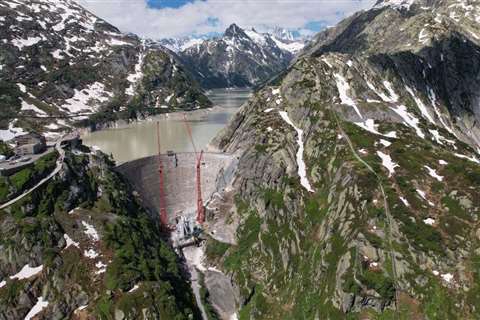 How Wolff is taking giant steps to overhaul Spitallamm dam
High in the Swiss Alps a pair of giant Wolff tower cranes are working to replace a dam at lake Grimsel. Alex Dahm reports