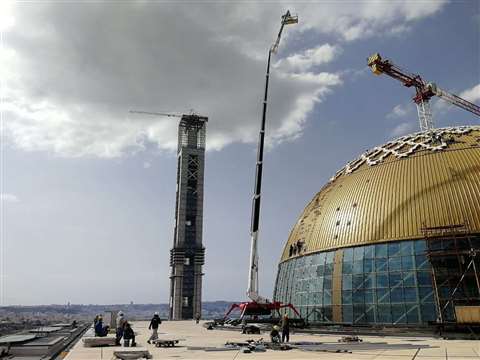 Algeria is constructing one of the largest mosques in the world.

The Djamaa El Djazair, or the Great Mosque of Algiers, faces the picturesque bay of Algiers and is part of a complex  including a one‐million book library, a Koranic school and a museum of Islamic art and history. There will also be commercial buildings, a restaurant, library, amphitheatre, plaza and underground parking with a capacity for 7,000 cars at the site.

Featuring the world’s tallest minaret, at 265m, the Djamaa El Djazair will offer a 20,000 square metre prayer hall, capable of accommodating up to 120,000 worshippers, and a 50m diameter dome.

Construction started in 2012 and is set to be completed in 2018. Many countries are represented in the huge build, including Canadian designers, a Chinese contractor, and products and machinery from suppliers all over the world. 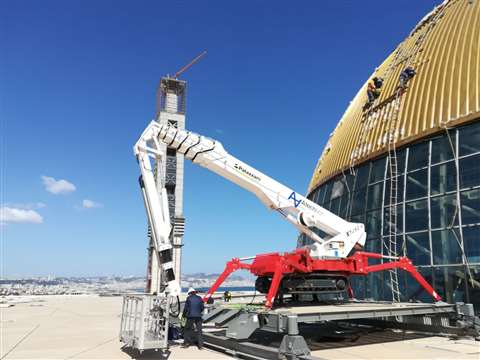 For the 50m dome, Palazzani has supplied a XTJ 52 tracked platform, customised so that it can be fixed on a separate platform, which is mounted on rails attached to the roof of the Mosque.The unit’s 52m of working height and 19.5m outreach grant’s access to the dome while the facade is being attached and for the maintenance and cleaning afterwards.

The design and configuration of the XTJ 52 took almost two years to complete. It is supplied with single-phase 230VAC electric motor 2.2kW, and 3-phase 5.5kW, 380VAC electric motor, with no diesel engine, as well as anti-collision sensors and electronic anemometer.