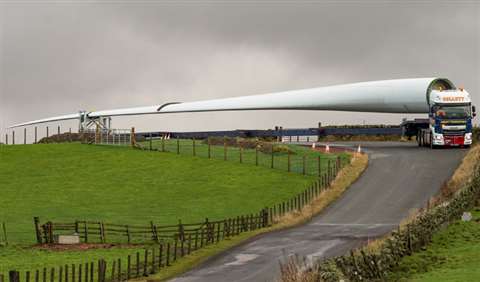 The GE 2.75-120 wind turbine stands 145 metres tall and its blades are 58.7 m long. Collett transported three turbines for phase three of the Muirhall Wind Farm in South Lanarkshire. It was straightforward enough to move the nine turbine tower sections on the planned route but the nine blades were another matter.

A previous record breaking project gave Collett experience of the route from the Port of Grangemouth when it delivered two Senvion turbines for phase two of Muirhall in February 2014.

The 63.35 m overall loaded length of the blades on their carriers necessitated careful route planning. Route suitability was ensured by using swept path analysis reports and route access surveys before taking a test drive. For this a vehicle was used that had been adapted to simulate the loaded vehicle. Along the route from the port some street furniture was removed, signs relocated and trees were pruned. Third party land requirements were negotiated and trackways placed.

Further preparations were made prior to the arrival of the blades at Grangemouth from Poland and the tower sections from Turkey. The hubs and nacelles for each turbine came from Germany. This presented another logistical challenge for Collett to co-ordinate arrival of the components necessary for each complete turbine.

Towards the end of November 2015 the first delivery convoy set off. To minimise disruption each convoy was one tower section and one turbine blade. Collett’s pilot vehicles and the police escorted the convoy. After crossing splitter islands, employing contraflows and using manual steering at key points along the route all the components arrived safely on site ready for construction.

Working on a six day a week delivery schedule, and adopting the blade and tower delivery combination, each component safely made the journey from Grangemouth to site, arriving in synchronisation with the construction schedule.