The history of Goldhofer

Some SC&RA members stand out for their products, some for their service – while others become known for longevity, and the resulting impact on the industries they’ve had over time. Then there are companies that simply check off all the boxes. Goldhofer Transport (Goldhofer) certainly fits that description. 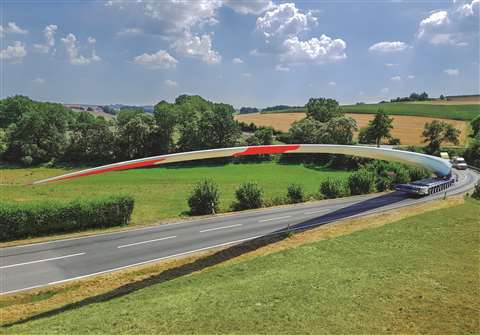 The Germany-based manufacturer of trailers, semitrailers and non-driven and self-propelled heavy-duty modules is globally recognized and led by a commitment to innovation that literally goes back centuries.

This year marks Goldhofer’s 50th year of SC&RA membership and, in that time, the industry giant has provided its fellow Association members with the equipment they need to make the most of the opportunities they’re pursuing within an ever-evolving range of industry sectors.

As with so many Association members, success at Goldhofer has been well-earned over time – cultivated through a dedication to both craft and people. But as for legacy – well, Goldhofer is in a league of its own.

“The Goldhofer name was mentioned for the first time in this region [Memmingen, Germany] in 1705 – where the company remains today,” explained Stefan Kohler, director of sales, North America.

“The company started as a blacksmith, doing horseshoes, horse coaches and so on. And that type of work went on for a long time. But in 1946, after World War II, Mr Goldhofer, the eighth generation of the family here in the region, established the Goldhofer trailer company, which we are, more or less, still today.”

Goldhofer sold his smaller trailers to farmers and the like, but he also had a good friend who convinced him to think a little more outside of the box. “His buddy, Mr Liebherr, had established his company maybe ten miles from here,” said Kohler.

“Indeed, that Mr Liebherr – he built his first excavator and crane, and asked his friend Mr Goldhofer to design him a trailer to move equipment from point A to B.

“Back in those days, there wasn’t a trailer you could drive onto from the rear. There was earth-moving equipment, but no way to move it. So, Mr Goldhofer designed this fairly standard trailer.”

To say the rest is history would be technically true, especially for a company with more than 300 years in the books, but that early relationship between Goldhofer and Liebherr served as a springboard that fuelled both the innovation and growth that defines the company to this day.

“In 1952,” said Kohler, “we attended our first big Bauma show in Munich, where Mr Goldhofer drove the first trailer to the exhibition with an old farm tractor. From that time on, we just grew, and by the beginning of the sixties, he’d already designed and built the first modular trailer for some projects in Europe.” By the end of the sixties or the beginning of the seventies, explained Kohler, Goldhofer had a handful of contracts in North America.

“That was a big year as well – 1972 – the year when Goldhofer sold the first equipment in North America, as well as it being the year we joined SC&RA.”

The company remained in the family, as it had since 1705, until the year 2000, when Goldhofer’s widow and her new husband decided to change it to a stock company.

“Mr Goldhofer passed away in the early eighties, and his wife took over and ran it until 2000,” confirmed Kohler. “In 2001, she donated one hundred percent of her shares to the Goldhofer Foundation – which means we are owned by a trust.

The Foundation gets a percentage of the profit every year, and they can use the money for some social and charity projects here in our region.” While Goldhofer didn’t quite live long enough to see how far his company would truly go, he likely had a good idea of where it was headed.

“In the seventies, we came up with the first real modular trailer – the really heavy-duty modular trailer systems where you can add to it length-wise and width-wise as needed,” indicated Kohler. “That was also when Goldhofer really began to ramp up in the world market.”

The SPMT (self-propelled modular transporter) came soon after. “They came in the eighties,” said Kohler. “And at the end of the eighties, we started with our second division – the airport technology division – with the airport tractors.” In the decades following Goldhofer’s death, the company leaned into both its values and its purpose. “We’ve always been determined to lead in technology and quality in the market,” affirmed Kohler. 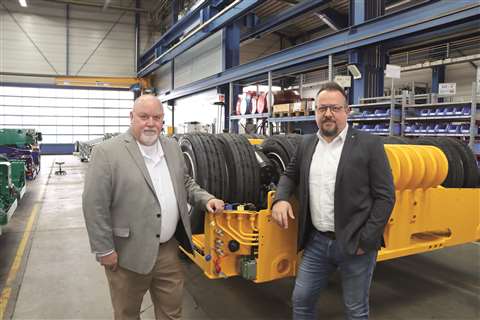 “Our slogan is ‘Made for Your Mission’ – we want to be a partner to our customers, a consultant, to listen to them, their needs and requirements, and make the product that fits their exact mission.” The world has certainly taken notice. “When I started in 1999, we had been a 40-million-euro company with around 400 employees,” Kohler pointed out.

“Now, we’re a 230-to-250-million-euro company with close to 900 employees worldwide, as well as five sales and service locations around the world, and products in roughly 160 countries.

“Quality is definitely a big piece of it – the reputation and brand around the world is the highest class. Which is why so many people choose Goldhofer, and even if they try something else, a lot of them come back.”

Within the last decade or so, Goldhofer has continued to do what it does best: innovate. “A milestone for us was around 2011, where we completely redesigned a huge overhead suspension beam system – which is nothing new to the world, but we used extreme high-grade steel where we could make it extremely light from the tail weight side and still carry a lot of payload,” explained Kohler.

“We called it Faktor 5, because the payload capacity to tail weight is exactly a factor of five.” An additional milestone, said Kohler, was achieved more recently. “A couple of years ago, we came up with the first blade lifter. Everyone around the world wants to go into green energy, windmills. The problem is they’re often built up on hills and it’s hard to get up there. So, we have SPMT to get up there but how do we bring a 230-foot [70 metre] wind blade up the hill? You need a special application – so we came up with our wind blade lifter (FTV), which can raise the wind blade 60 degrees up in the air, and pitch it 360 degrees out of the wind, and so on.”

Both Kohler and Jerry Rothwell, senior area sales manager, North America, also know where and when to recognize fellow innovators. “We truly appreciate our relationship with SC&RA,” noted Rothwell.

“Obviously, we’ve been here for five decades, so we understand what an incredible platform it is to get engaged with other members as well as involved in the industry at large. But we also really appreciate the SC&RA app.

“It’s made my life so much easier from a networking perspective. It takes away all the challenges of having to wait for an event to get information or communicate with other members. It’s now completely simplified; I use it on the road and encourage other members to get it.”

Kohler added, “It’s state of the art, and SC&RA did a great job with it – something we can relate to.” As for what the future holds with Goldhofer, Kohler is looking forward to Bauma 2022, set for October in Munich. He can’t forecast whether or not there will be complications connected to the Russia-Ukraine conflict because it’s too far away to tell just yet, but he does have reason to hope the show is a success.

“While we can’t discuss anything right now, we do have some innovations in the works – which we plan on presenting at Bauma.”