The company has been playing a key role in the transport of lunar robotics for PA-based Astrobotic.

Sandy Steffan is an industry powerhouse. Not only as the vice president of Steffan Industries, but as a role model to women of all ages, inspiring them to make their mark in the construction industry, and now, space. Under her leadership, Steffan Industries has been hard at work, and literally shooting for the stars. 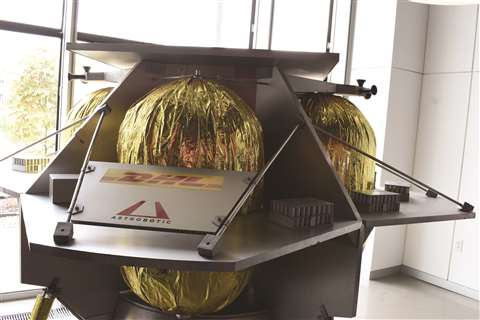 The company has been working with Astrobotic, which identifies on their website as a “lunar logistics” company, specializing in making space missions feasible and more affordable for science, exploration and commerce. Astrobotic provides end-to-end delivery services for payloads to the Moon.

“We’ve become the provider of choice for all of the transportation and rigging of their projects in our region,” said Steffan, vice president, Steffan Industries. “It’s been a team effort with Astrobotic’s team, my operations and project teams and intricate collaboration with our amazing insurance partner and provider, Duncan Financial. The projects have gone so well and our advocacy of the ‘cool stuff’ we do in our industry caught the attention of the director of Astrobotic’s new venture, the ‘Moonshot Museum.’”

In fact, following their close involvement in the project, the executive director of the new museum even invited Steffan to film a feature segment for their campaign, “Find Your Place in Space.” 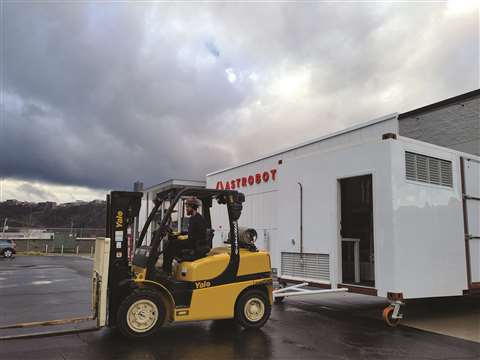 Technical Specialist Michael Shaffner is seen operating a Yale forklift. Steffan Industries had the perfect fleet for this project.

Steffan reflected on the main highlight of the video. “You don’t have to be an astrophysicist to play an important role in a ‘mission,’” she said. “It’s all been so rewarding and inspiring, and of course great for focusing on our industry and highlighting strategic partnerships that make for successful projects.”

Described on the Moonshoot Museum website, when the exhibition opens on October 15, 2022, “visitors can see real spacecraft as they’re built in real time, go on their own simulated lunar mission and find out how they fit into the future of human space exploration.”

Now where exactly does the crane, rigging and transportation industry fit into all this?

In April 2022, Astrobotic’s Mechanical I&T Lead connected with the company’s business development manager for a project to offload and set equipment at their facility in Pittsburgh, PA. 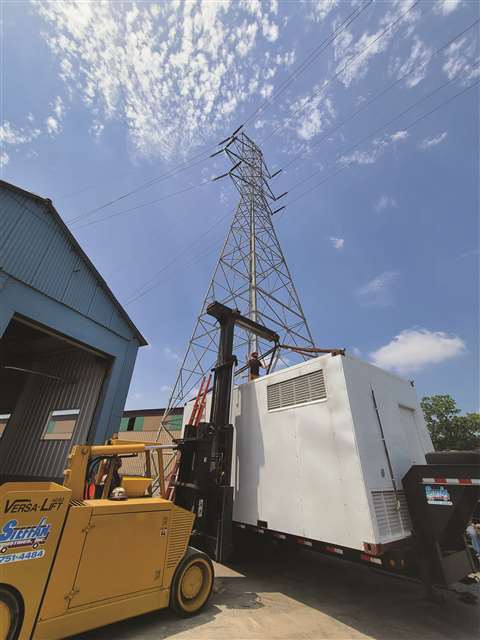 A custom, highly specialized container was fabricated exclusively for the safekeeping of Peregrine 1 during transportation. Corky Shaffner is pictured operating the VL 40/60.

“The description of the container’s ‘contents’ were intentionally vague – once we completed Astrobotic’s NDA, their team sent us an RFQ for rigging services,” said Steffan. “The RFQ revealed the contents of the container, which was their robotic lunar lander Peregrine 1.”

Steffan Industries has since completed 11 projects since April 2021, and nine since April 2022. Eight of those include handling, logistics and transportation of Peregrine 1.

“We then relocated, maneuvered really, the empty container through the exterior and their parking lot,” Steffan added.

“Astrobotic was very happy with the professionalism and efficiency of our team, and expressed interest in utilizing our services for the relocation of Peregrine 1 to their other testing facility in Ambridge, PA,” said Steffan.

That transport involved taking one tractor/trailer with a VL40/60 to Pittsburgh, followed by a second tractor with an empty gooseneck trailer. Steffan Industries used the Versa-Lift VL 40/60 with rigging boom to lift the container, back their trailer underneath and secure the load.

“The container is oversize (permits required), but not requiring pilot vehicles – but because of the nature of the contents, we provide pilot services for additional load security,” said Steffan.

They transported Peregrine 1 and the VL40/60 to their facility in Ambridge, PA, where the team began the offload process and set the container just within the door opening of their lab. Steffan Industries has relocated Peregrine eight times using the same rigging methods.

The rigging and lifting instructions for Peregrine’s container specified that a crane be used to offload and set Peregrine 1. Due to the urban environment and dense building population, a crane wouldn’t be possible and there were no fork tubes to lift the container from the bottom. But with several Versa-Lifts in their fleet, Steffan Industries had the perfect equipment for this project. The team dispatched one of their Versa-Lift 40/60 units with a rigging boom for the initial project offload in April, and have since used the same equipment for each relocation.

“I can’t say enough about our team. They work nonstop and sometimes at all hours and weekends to accommodate Astrobotic’s last-minute schedule requests,” she said. “The whole team dives through hoops to make it happen on time. The team is 100 percent responsive to customer’s needs without complaint.They’re a humble group that treats these projects with a commitment to safety, details, and efficiency, just like any other project – but I know they are very proud to be a part of an extraordinary project that’s literally changing the world.”