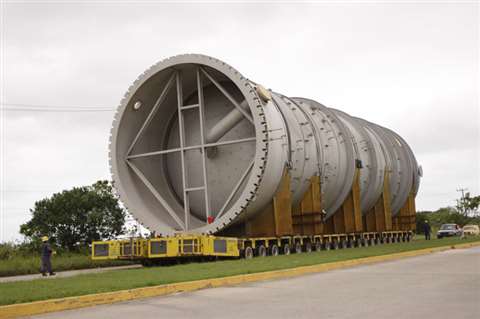 A self propelled modular transporter (SPMT)

Radical new guidelines for the operation of self propelled modular transporter (SPMT) are due to be published in the third quarter of 2014 in an attempt to reduce the number of occasions when SPMT tips over. Graham Anderson reports.

In 2011 concerns regarding accidents with self propelled modular transporter (SPMT) were expressed at KHL’s World Crane and Transport Summit in Amsterdam, Netherlands. At the conference a number of speakers pointed out that some SPMT loads were tipping over, even though the existing operating rules and stability calculations had been precisely followed. Clients were asking what the industry was going to do about the problem.

In response, the European Association of Abnormal Road Transport and Mobile Cranes (ESTA) created a working group that included representatives from several of its leading members, plus equipment manufacturers and clients.

ESTA also commissioned engineering consultancy company Euro-Rigging from the Netherlands to develop a common mathematical model that could be used throughout the industry and that would better take into account the full range of forces affecting an SPMT and its load.

David Collett, ESTA president and managing director at Collett & Sons, in the UK, said, “We have been working on this for a couple of years now and it is really challenging the way we have done things in the past. It is presenting us with a totally new way of operating SPMTs. We will see the final outcome later this year.

“Up to now accidents and near misses have sometimes happened when the existing safety guidelines have been followed – and when an accident happens the fall-out can be monstrous. Of course, there is the issue of personal safety, and that is terrible. And on top of that, a whole project can be threatened and the consequential losses can be huge.

“At the same time, in some markets, an increasing amount of work is being done by SPMTs, they are becoming the norm, and yet there are no guidelines at all. Nothing exists. Of course, the best practice guide will not be able to address every issue in every circumstance, but it will be a starting point, a baseline.”

Senior lead engineer Andre van der Steen, who is leading the work for Euro-Rigging, said that the key was to adopt a full three-dimensional approach, and to take into account all of the forces affecting SPMT stability. This means paying particular attention to the elasticity or stiffness of the system and the progressive effects of trailer deformation.

Van der Steen also added that monitoring the complete route to be taken was essential. “Speed can affect the capacity of the trailer, and you can decrease speed for areas of softer soil,” he said.

Van der Steen stressed that although the work is based on complex mathematical models, the aim is to produce simple guidelines that will be practical and easy to use. “With an SPMT trailer there is the same amount of ‘elasticity related’ variables as for a crane. Yet there are currently no load charts for trailers.”

He explained that a lot of this work might be applicable to road transport modular trailers, although with modular trailers, speeds are usually a lot higher and more variable, so for now the group is just concentrating on SPMT.

David Collett concluded, “This is the most expensive piece of work ESTA has ever carried out and we want to spread it as far and wide as possible. This will change the face of SPMT operations in future.”