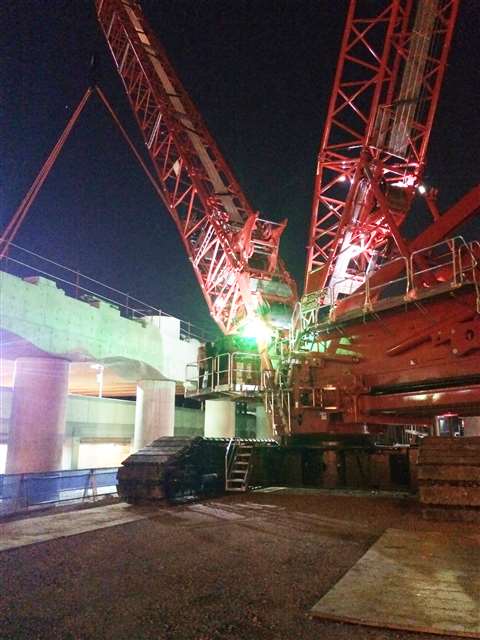 Shinui Petra, one of South Korea’s largest construction equipment rental companies, has introduced a MLC650 crawler crane from Manitowoc into its rental fleet.

The crane has been selected for its variable position counterweight (VPC), a design feature designed to allow for less ground preparation, ground-bearing pressure, space requirements and counterweight.

Choi Byung Eng, president and CEO of Shinui Petra, said, “When we first saw the MLC650 at the ConExpo 2014 exhibition in Las Vegas, Nevada, USA, my team and I were thoroughly impressed by the unique VPC technology. The ability for this crawler crane to navigate with ease in highly congested job sites, coupled with its increased capacity for heavy lifts without traditional counterweight configurations, gives us a strong competitive advantage.”

The MLC650 has 104 metres of main boom to which up to 30 m of fixed jib can be added. A 101 m luffing jib is also available to reach a maximum 157 m. Shinui Petra has ordered the VPC-Max attachment for the MLC650 which enables the crane to raise 140 m of boom or a boom and luffing jib combination of 205 m. In addition, its maximum capacity is boosted to 700 tonnes with the VPC-Max.

The crane is suited to infrastructure applications so it was perfect for Shinui Petra’s first task for it, installing concrete beams for the construction of an elevated road. The space available for the crane’s assembly was limited. However, the MLC650 was still able to setup swiftly, because installation requires considerably less space than alternative cranes of this capacity.

On the project the MLC650 was rigged with 56 m of main boom, its VPC-Max attachment, 400 tonnes of counterweight and with 10 parts of line on the hook. It lifted loads of up to 150 tonnes out to working radii of up to 40 m.

“The VPC changes the way companies think about projects,” said Bruce Buchan, Manitowoc Cranes SVP crawler cranes. “It not only enhances crane capacity, but also reduces mobilisation time on the job site which, in the end, saves customers a significant amount of time and money and delivers a faster return on investment to them.”