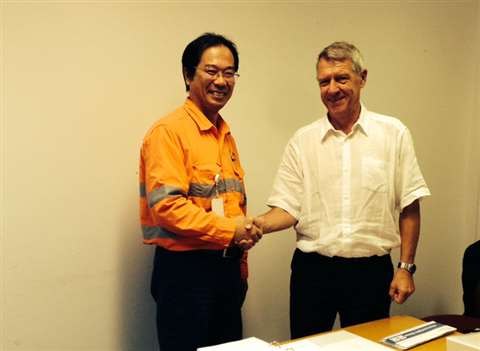 Heavy lift and specialized transport company the Sarens Group has been awarded a contract by JKC Australia LNG to carry out sea lifting works for the $15 billion Ichthys liquefied natural gas (LNG) project in Darwin, Australia.

The job includes two major installation works, which will be carried out within a month, a spokesperson said. The first task will include the loading, transportation and installation of three jetty modules using a 1,250 tonne capacity CC 6800 Terex crawler crane mounted on a barge. The heaviest module weighs 472 tonnes.

The second task will be the loading, transportation and installation of 14 jetty structures. The structures are being assembled on the East Arm Port. They will be loaded using a 350 tonne capacity Liebherr LR 1350 onto a second barge and then transported to the jetty head and installed with the CC 6800.

Luk Roelandts, Sarens Australia, national sales manager, said, “The contract we signed with JKC Australia LNG is strategically important for the Sarens Group. We see this as a confirmation of trust by our partner and an acknowledgement of our profound engineering experience and technical know-how.”

Gas from the Ichthys Field will be processed offshore to remove water and raw liquids, including condensate, a spokesperson said. Once processed, it will be travel along an 889 km subsea pipeline to an onshore processing facility in Darwin.