The tough build quality and adaptability of the rough terrain crane type means it’s used often, and often used hard. And with Liebherr now back in the sector, competition from all main players in the sector is high.

US crane manufacturer Link-Belt has updated its 90 tonne capacity 100RT with a newer model. The previous 100RT, which the manufacturer introduced at its CraneFest 2015 event, had a six-section pin and latch boom that extends to 50 metres. The newer model, launched at CraneFest 2018, has a five-section full power formed boom that extends to 47.2 m. 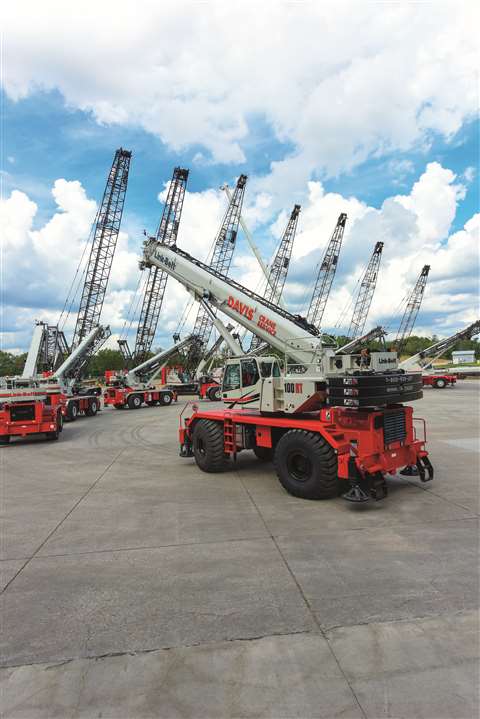 Link-Belt says it has simplified fly assembly with new ground level carrier controls. One control raises and lowers the boom angle from 0 to -3 degrees, and another control is used for the fly assist cylinder.

The crane has a 24-volt electrical system with Controller Area Network (CAN bus) wiring. Multiplexing is possible with modules placed near dedicated functions like outrigger beams and winches. In total, there are five modules located throughout the machine that

Link-Belt says allows crane functions to continue working in instances where other modules are being diagnosed or serviced.

The carrier deck can be accessed via six entry points using new ergonomic ladders. Link-Belt says that, regardless of slew angle, the operator has easy egress to the flat deck from the cab. The 100RT exterior has new durable ‘tough skin’ paint and slip-resistant paint on the carrier deck.

Outrigger beams (either fully retracted, intermediate or fully extended) are setup in pairs from side-to-side or front-to-rear. Once outriggers are set, Link-Belt says the Pulse 2.0 system indicates the crane’s available capacity. The system then previews the operator’s real time capacities given the crane’s current configuration at the next five radii for a set boom angle.

Upon selection, Link-Belt Pulse 2.0 provides a live view of the working area with colour-coded quadrants. If the chart exceeds capacity at a given slew angle, swing arrest will initiate five degrees prior allowing the crane to come to a smooth stop, Link-Belt explains.

The Pulse 2.0 system has a large touchscreen interface and can be updated and serviced remotely.

The crane has a new winch design with ultra-wide drums designed to provide increased line pull at higher working layers. The maximum winch line pull is 23,632 lb. (105.1 kN). Link-Belt says improvements have been made to the crane’s hydraulic outboard routings and wiring to aid servicing.

The cab on the 100RT has also been updated. Link-Belt has used the new cab design it introduced on its 75RT in 2017. The electrical components are plug ‘n’ play and the cab can tilt up to 20 degrees. It has what Link-Belt describes as an “automotive-type, high capacity” HVAC system and the cab has increased storage and interior lighting than the previous model.

Link-Belt says a camera vision package on the 100RT enhances on-board site monitoring and includes a back-up camera, as well as cameras for viewing winches and the right side of the upper. The 100RT can be transported with its base unit fully equipped (minus modular counterweights) at 92,859 lbs (42 tonnes) and has an overall height of 12 ft 10 inches. (3.91 m).

“There’s not a full power boom out there that carries this capacity chart at radius,” comments Brian Smoot, Link-Belt’s product manager telescopic rough terrain cranes. “This will be a dominant player for rental fleets, refineries, and plant work in general, handling longer radius with ease.”

Chinese manufacturer XCMG reports strong demand for its two-axle, 60 tonne capacity RT60 rough terrain. XCMG describes the crane as a “high end” model which was developed in conjunction with a German research and development centre and has CE certification. 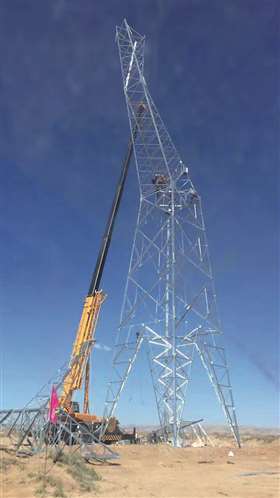 XCMG’s RT60 being used in the Ala Shan Desert, China

The crane’s certainly been put through its paces. XCMG reports that it has been used extensively in the Ala Shan Desert, China, on a project to connect east and west China on the energy grid. The project requires the construction of 15,000 power grid supports (pylons). According to XCMG, Shi Xiaolin operates one of the RT60s being used on the project. Xiaolin is reported to have said, “Only cranes with these tyres can be driven freely here. Ordinary cranes are not able to handle the local environment. It has an boom length of 43.2 m and it is easy to hoist the pylons. Furthermore, one can drive the crane while hoisting heavy objects, which makes it very convenient and efficient. While driving the crane, I feel like I am driving an all-road vehicle. One is able to drive this crane over mountains even with a heavy load.”

According to XCMG, Xiaolin says he wouldn’t leave the vehicle because it is so comfortable, even after sitting in it for prolonged periods. “The control buttons are well-designed and arranged, making operation very easy,” Xiaolin says. “In these challenging environments with so much sand and stones and being located at such a large distance from the service station we were concerned by possible breakdowns; however, we now feel that this concern is no longer necessary.” According to XCMG, the crane was reinforced for the high-temperatures and high-dust environments.

Another crane that has been put through its paces in the desert is a Terex RT 90, owned by Saudi Arabia-based industrial service provider Expertise Contracting Company. The company was commissioned by oil and gas drilling contractor Nabors Industries to lift a range of components for drilling rigs, generators, and a power distribution and control centre in the desert at Abqaiq, Saudi Arabia.

According to Nabors drilling manager David Siljeg the crane was used for “five months of continuous back-breaking work without any downtime.”

“For this project, we needed a heavy-duty, reliable crane that not only combined a large lifting capacity with excellent manoeuvrability under tight space conditions, but that would also be ready to start working at the drop of a hat,” he continues.

The RT 90 has a five-section, full hydraulic boom that extends 47 m (154 ft). A 17 m (56 ft) bi-fold jib is available. The RT 90 has the Demag IC-1 control system with integrated diagnostics, an ergonomic cab design with an 18-degree tilt and an easy-to-access flat deck.

The crane is under 3 m wide and has a removable counterweight, which Terex says allows it to be trailered without weight and width restrictions in most situations. It also has four steering modes, including two-wheel, four-wheel, crab and independent rear axle steering.

Expertise Contracting using its Terex RT 90 in the desert

Another company using rough terrains in tough challenging petrochemical environments is Italian contractor Officine Dandrea. The company bought four Manitowoc Grove RT550E rough terrain cranes which, according to Manitowoc, are prized by Dandrea due to their compact design, manoeuvrability and lifting performance at height. “The RT550E fits our requirements perfectly,” comments Dandrea owners Giacomo and Nicola Dandrea. “It can perform lifts that were previously only possible with a two-axle, all terrain crane, meaning it also has a lower total cost of ownership. What’s more, with Manitowoc’s Crane Control System (CCS), the joystick functions are configurable for all crane functions (turning, hoisting, boom telescoping and jib operation). Response curves and operating speeds can also be adjusted to the operator’s convenience.”

The RT550E has a capacity of 45 tonnes and a 39 m boom. It measures less than 12 m long, 2.55 m wide and weighs under 29 tonnes, fitting within most European road regulations for heavy machinery. 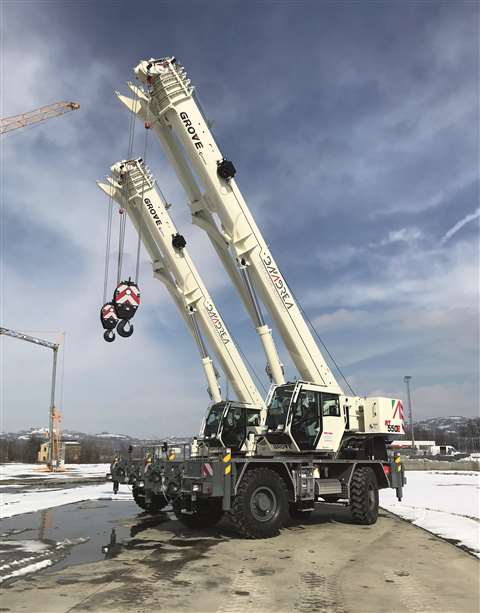 At its Crane Days 2018 customer event Manitowoc unveiled the latest in its line of rough terrain cranes: the Grove GRT9165. According to Manitowoc, the crane offers the longest reach and highest capacity of any model in its rough terrain line-up, and is designed to help companies increase efficiency while maintaining a low total cost of ownership. 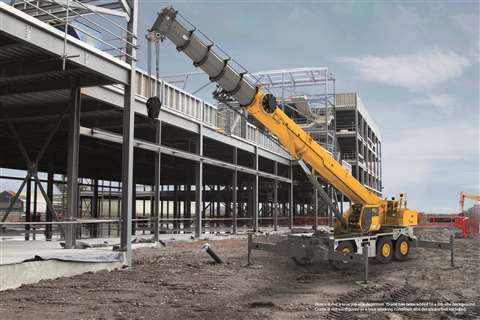 Manitowoc’s latest addition to its RT line: the Grove GRT9165

The GRT9165 is a 149 tonne (165 ton) capacity crane with a 62.5 m (205 ft) six-section, pinned boom. It has a tip height of 91.2 m (299.1 ft), and both manual and hydraulic extensions are available. It has been designed for easy transport, with a compact overall height of 3.8 m (148.5 inches). It also has hydraulically removable counterweight and outrigger boxes, in addition to a hydro-gas suspension on the rear axle. With all components removed, the GRT9165 weighs approximately 53 tonnes (116,000 pounds).

Paul Cutchall, product manager for rough terrain cranes at Manitowoc, said the GRT9165 represents the latest advances in Grove technology, including features that have been developed specifically in response to customer demand. “The crane’s longer reach in particular will help lifters to bid for and complete more jobs with a single crane, increasing their capabilities,” he says.

Finally, Japanese crane manufacturer Tadano has updated its GR-200EX specifically for the Oceania market (Australia, New Zealand and Papua New Guinea). Tadano says it meets all standards and regulations without requiring any modifications. 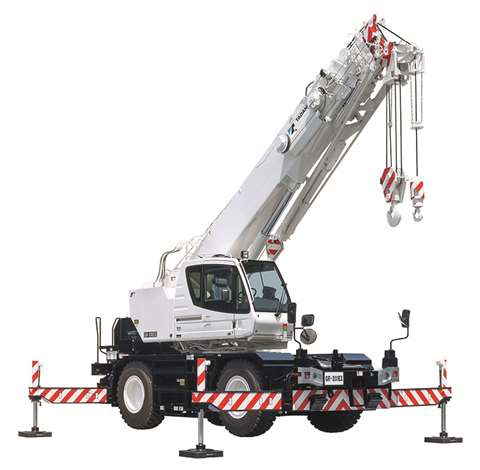 Tadano has developed the GR-200EX for customers in Oceania

The 20 tonne class rough terrain has a new cab with what Tadano describes as an improved design for better operator comfort, increased visibility, and it includes the Tadano View human detection and wide angle view camera system.

Tadano reports customer interest has been high, with some looking to replace their Tadano TR-200M with the GR-200EX.

It’s perhaps unsurprising that Tadano has identified specific demand for a rough terrain model in the Oceania region; the terrain there is just as challenging as the desert in Saudi or China. And as long as construction projects continue in these tough territories, there’ll be demand for rough terrains.

Polish port operator DB Port Szczecin has bought a new 90 tonne capacity Liebherr LRT 1090-2.1. The rough terrain crane will be used for reloading piece goods, including granite blocks and large steel rollers, and is the first Liebherr crane the company has bought. It will join a fleet of four other cranes.

The LRT 1090-2.1, along with the LRT 1100-2.1, was launched by Liebherr in 2017 and marked the company’s return to the RT market after an absence of 20 years. Since their launch, Liebherr has been enjoying a steady stream of orders with customers, including: the All family of companies in the USA; Al Faris in United Arab Emirates; Wasel in Germany; and Crane Hire in Ireland.

The LRT 1090-2.1 has a 47 metre telescopic boom that has a two-stage hydraulic cylinder with mechanical rope extension. It comes with Liebherr’s VarioBase outrigger positioning and monitoring system and a rear-view camera as standard.

“The LRT 1090-2.1 meets our expectations in full,” comments Daniel Saar, managing director at DB Port. “Its lifting capacities are high and the operating speeds, for the hoist unit and slewing unit, for example, are perfect for us. The support procedure is straightforward.” 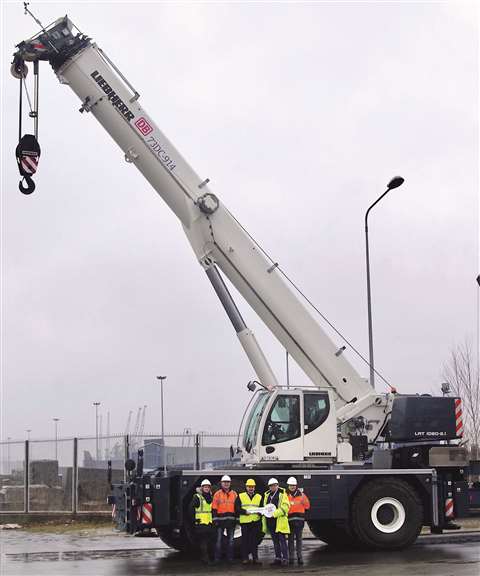 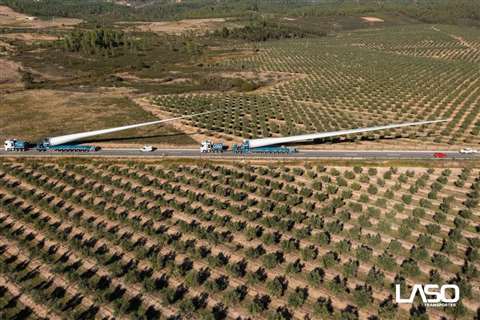 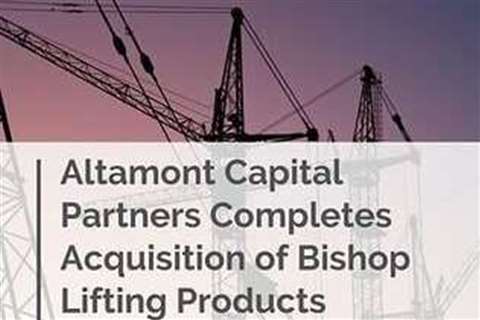