Despite the huge upheaval and disruption caused by the pandemic, the industry seems to have been bouncing back as quickly as it was disturbed in 2020.

Following the data can always lead to the right conclusions and we would like to thank every respondent who took part in our digital collation of information in this year’s survey. It helps us to establish a bigger picture of what’s going on, and in turn can help you the reader benchmark your business or identify key players and trends set to emerge on top throughout the year.

Construction response to the Covid-19 pandemic
The survey data was collected from a range of businesses and respondents from around the world, and so it builds a global picture of the industry in general, rather than just a specific region or country. In terms of a geographical break down, the majority of our respondents operate in North America (46 per cent) but we also have large reporting from Europe (26 per cent) as well as information from the Middle East and from Asian countries.

We are pleased to include reporting from African countries and Australasia, too. It would be helpful to bear in mind this global split when reviewing the results, to ensure a clear perspective, and to be aware of any bias that might have been formed

This could be seen as encouraging, especially when compared to last year’s results. At the start of 2021, though 41 per cent of respondents indicated they felt business conditions were currently stable and 31 per cent said they were improving, 28 per cent believed conditions were declining, which was a higher figure than in 2020. It’s good to see this reduced slightly this year. Of course, it would be better if conditions were improving across the board, but a sense of stability is just what is needed after such a turbulent time.

Construction business activity 2022
Comparison year-on-year identifies both positive and negative changes. When looking at business activity in 2021 in comparison to 2020, most respondents said that they saw a deterioration. In fact, 42 per cent believed business activity was reduced. This could be for a variety of factors but perhaps the virtual changes forced upon businesses and the majority of meetings unable to happen in person could be to blame.

After all, though the industry has adapted as well as possible to virtual events, video conference calls and more email correspondence than in-person conversations, it is a drastic change. The physical handshake to complete a deal feels so far removed from our current way of working. Perhaps a return to live events and in-person meetings this year may improve activity over the coming 12 months.

Our optimism seems to be reflected in the results from the survey. When looking ahead for the coming year, most respondents have expectations that business levels will improve in the next 12 months. More than half of respondents (51 per cent) believe levels will improve, 37 per cent believe business levels will remain stable, and only 12 per cent think that they will deteriorate further. Last year, more than 15 per cent thought levels would worsen, so perhaps it’s encouraging to see this number decrease year-on-year as we finally start to emerge past the pandemic.

Employee changes
This confidence shown in machinery investment isn’t quite as strong when it comes to the employment market, although it remains significantly positive, with 48 per cent of companies stating they will increase the number of employees. Equally encouraging is that 40 per cent intend to make no changes and retain all existing staff.

Around 12 per cent of respondents, however, did indicate they will reduce the number of employees, demonstrating the pressure on staffing due to the pandemic. It should be considered that in some cases it is likely the reduction will be involuntary and as a result of not being able to find enough suitable people.

The reduction is a smaller number than last year, though, where 16 per cent said that they expected their company to reduce employee numbers. Dramatic staff changes and unfortunate redundancies have been seen not only in the crane sector but across the majority of industries and this, combined with the Great Resignation of 2021, is bound to bring about changes to staff numbers.

Future forecasts
In terms of the forecasts for change in rental rates over the next 12 months, it’s a slightly different story. For wheeled mobile cranes in general, 38 per cent of respondents believed the rates would be higher and more than half (51 per cent) thought they would stay the same. Only 11 per cent thought they would be lower. For the 100 tonne capacity class it was a similar split with 40 per cent expecting them to be higher, 48 per cent expecting no change and 12 per cent forecasting a lower average rates.

When it comes to crawler cranes, the survey demonstrated that most expected it to stay the same, with 55 per cent expecting no change in the 70 tonne capacity, and 50 per cent expecting the rates to remain the same in the 150 tonne class. Most respondents thought tower crane rental rates would increase, with 50 per cent of companies believing the 100 tonne-metre class rental rates would increase and 50 per cent of companies expecting an increase in the 300 tonne-metre class of tower cranes.

When it comes to fleet time utilisation, most of our respondents – a whopping 63 per cent of our survey – indicated they thought this would remain stable, 22 per cent thought it would improve, and 15 per cent said they expect a reduction.

Global opinion
As this is a global survey, there were, as ever, some varied opinions from many different places around the world. While generalised, they do offer a taste of what rental crane companies are thinking about the state of the industry.

In South America, one enthusiastic response was, “Brazil is back in growth!” while in South Africa the experience of one respondent was that “the construction industry is very flat here and we are waiting for the turnaround.”

In Germany, one respondent commented that there “is still a lot of work but competition is growing.” From Italy, “The crane rental market in North Italy is increasing. The prices are still lower than the rest of Europe,” said an Italian crane rental company.

A European crane rental company lyrically illustrated its experience, “Rates are dropping like rain on a stormy night.” Another European respondent commented on rental rates, “We are based in Slovakia and Czech Republic. There are many rental companies here in such a little market and that is lowering prices a lot.”

It seems to be a similar story in India where a respondent reported, “Crane rentals are getting very competitive and it’s difficult to survive.”

Rates are also being affected in the UK, where one view was that “the rates for mobile and crawler cranes are taking a massive plunge since the start of the pandemic.”

In the USA, it seems a mixed bag of opinions but the topic is also very much centred around rental rates. One company said, “rates are decreasing by the minute while expenses are increasing. There are a lot of payment issues.” Another US respondent, however, said, “Things are getting better and 2022 should be good.” 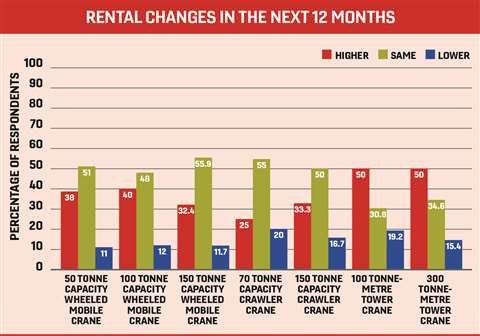 A different USA-based crane company said there is an “increase in infrastructure projects and a decrease in general construction.”

In Australia a responder wrote that “empty hook speeds are more critical than ever and demand on electrically powered cranes have increased. There is also an increasing request to retro fit noise control on diesel cranes.”

The statistics offered from this survey may not fully reflect the state of the market everywhere but they do offer insight and the thoughts of crane rental companies, looking back over the last year and looking forward over the next 12 months. We hope that it showcases some strengths and stability, and the sheer resilience of the crane rental market during an incredibly chaotic and turbulent time. Bright blue skies may be ahead on the horizon, and as ever cranes will dominate the skyline. 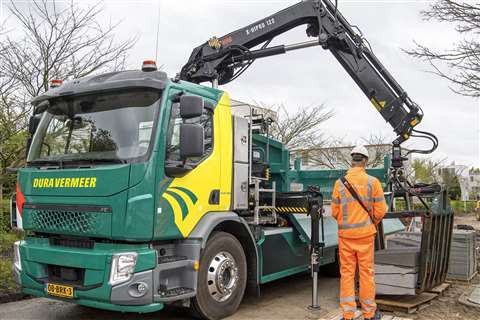 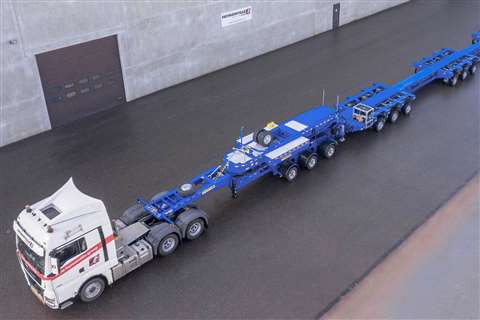