Special contributor Heinz-Gert Kessel reports in the first of a two-part article about utilising tower cranes in the wind energy industry.

Making greater use of wind energy to generate electricity helps reduce carbon dioxide emission into the atmosphere. Developers are constantly striving to increase efficiency and therefore the viability of wind turbines as a means of production.

This efficiency is closely linked to tower height and turbine size. Increasing the hub height from 70 to 125 metres can increase a turbine’s output nearly 60 per cent. Another 45 % can be achieved with a 160 metre turbine.

Beyond 150 metres hub height the crane installation and rigging costs rise exponentially with the crane size. This applies to the typically selected lattice boom crawler and wheeled mobile cranes.

Requirements for the next development of onshore wind turbines are to be able to lift 100 to 120 tonnes to a 250 metre lifting height. That is pushing the limits of mobile cranes in terms of economical transportation and erection.

Alternative lifting solutions, for example, self-climbing cranes ascending the turbine tower during installation, very much reduce the crane component to an absolute minimum. At first glance this appears to be a reasonable way to reduce crane costs. Such lifting devices would reduce carbon dioxide emission dramatically because as many as 80% fewer truck loads are needed to transport the crane to site. In the same way, space for crane assembly could be reduced by 90 %.

To achieve the above the turbine tower and the erection procedure of the turbine must be adapted to the crane concept. For example, designers mast cope with the limited reach of a self erection crane and the need to add the generated load of the crane itself into the structure under construction at any time.

Height of efficiency with more lifting capacity
Suitable climbing ladders, struts and brackets have to be integrated into the wind turbine tower surface and calculated already at their design stage.

Only a small number of specialized prototype cranes adapted to very special tower systems have been developed. An example is the Enercon Lagerwey climbing crane.

In most cases there is no close relationship between crane supplier and turbine manufacturer. Generally, the wind turbine installation is carried out with the cheapest locally rented crane of suitable capability. Free standing crane solutions are preferred where possible.

Attaching the crane to the wind turbine tower is rarely popular with turbine designers. It is similar with integrating a crane foundation inside the turbine foundation, even though that is a way of dramatically reducing crane costs.

Throughout development history, when mobile crane capacity has reached technical or economic boundaries, the focus turns to tower cranes. At first glance a climbing tower crane could easily cope with the greater under hook height by choosing a free standing tower system.

In most cases substantially more lifting capacity is required. For a tower crane this often means a new crane upper and then a larger and more expensive tower system. Fast changing capacity requirements and no guarantee of a two- or three-year rental for a specialized tower crane mean few takers.

A good example is the first tower cranes used for wind turbine installation, the Liebherr 630EC-H 70, saddle jib cranes with specially designed saddle jibs for a maximum of 70 tonnes. It can be transformed into a standard 630EC-H with 40 or 50 tonnes capacity. The larger 125 tonne capacity Liebherr 1000EC-B can be transformed into a general heavy lift flat top crane with 100 or 50 tonnes capacity.

The Wolff 700B custom wind turbine luffing jib tower crane lifts 95 tonnes at a 10 metre radius and has a free-standing underhook height of 154 metres. As a standard construction crane it has its heavy lift boom replaced by a light weight general construction boom.

Krøll has designed its luffing cranes like the standard heavy lift series. Changing the boom tip section of the wind turbine installation version for a standard jib tip section is all that is required.

First generation turbine tower cranes in the 700 to 950 tonne-metre range are generally too small for today’s wind turbines. Instead, 1,600 to 2,000 tonne-metre class models are needed. The next generation of 10 MW turbines could even call for 3,000 to 4,000 tonne-metre giants. An example is the Mammoet LTC4000.

Turbine blades versus fast rigging mobile cranes
Road transport weight limits may not allow loads above 100 tonnes, but the lifting height requirement will increase to 200 metres or more. Turbine blades weighing up to 50 tonnes mean a greater outreach requirement and could lead to higher crane capacity requirements outside the minimum crane radius in which generally turbine towers are constructed.

Turbine tower cranes are in direct competition with fast rigging mobile cranes. As is typical for Krøll turbine tower cranes, special devices have been developed to speed up the crane installation procedure. These tools are also useful in general construction crane applications. An example is the simplified reeving for the luffing.

Chinese manufacturer XCMG says about 10 riggers are needed to install the new XGL1800 tower crane. Crane climbing follows the wind tower installation, so it could be economical to also use the wind turbine rigging crew for the tower crane jacking.

Less bulk for tower cranes
Tower cranes suitable for 150 metre turbines need roughly half the erection space needed for a conventional mobile crane. This is a real benefit in sensitive areas like woodland and in areas of intensive agriculture. In addition, crane components can easily be kept within the size and weight limits of increasingly strict road regulations.

The installation time is longer compared to a mobile crane. After basic erection with an assist crane the tower crane then has to be climbed to its final hook height. Choosing a luffer immediately increases the available hook height and means less tower is needed and fewer climbing operations.

In contrast to a saddle jib version, production costs are about 30 to 40 % higher and extra care is needed to be able to achieve an horizontal load path. In addition, a luffing crane often working at minimum radius must remain wind-safe, including when booming out against wind pressure from the front. 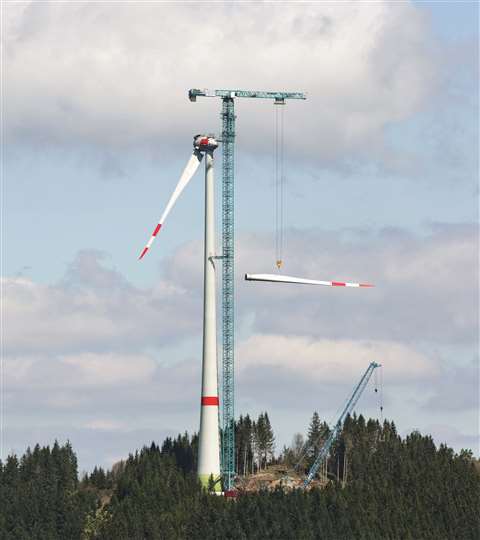 It can be an economical alternative when at least one tie in support to the tower is allowed. In this case the 1000EC-B can, for example, lift 100 tonnes to a 175 metre under hook height with one active tie in.

Climbing systems have being improved to reduce erection time and increase safety, but turbine construction creates its own design challenges.

In contrast to general construction work, the working period at a single turbine project is very short. This means the crane has to be frequently climbed up and down. To do this calls for a durable, fast, safe and easy to handle tower section connection device and a fast-climbing system.

It also demands a climbing crew on site for nearly the whole time. Unlike mobile cranes a tower crane cannot be moved around in a short time on a wind farm. Rigging time is reduced by having all the major tower crane components shipped in blocks. A second undercarriage already installed at the next turbine tower site can also speed up the tower crane transfer.

What remains is the time-consuming climbing process itself with the insertion and removal of each tower section. Sometimes it has to be done at night to keep up with the pace of the fast track installation process.

To speed up climbing Krøll built a separate climbing winch and derrick to lift and place the tower section while the crane’s boom is used to balance the crane. Minimising the height of the crane before starting to climb helps save money by needing a smaller erection crane. A tower system climbed from ground level is more suitable than one made up of different tower sizes.