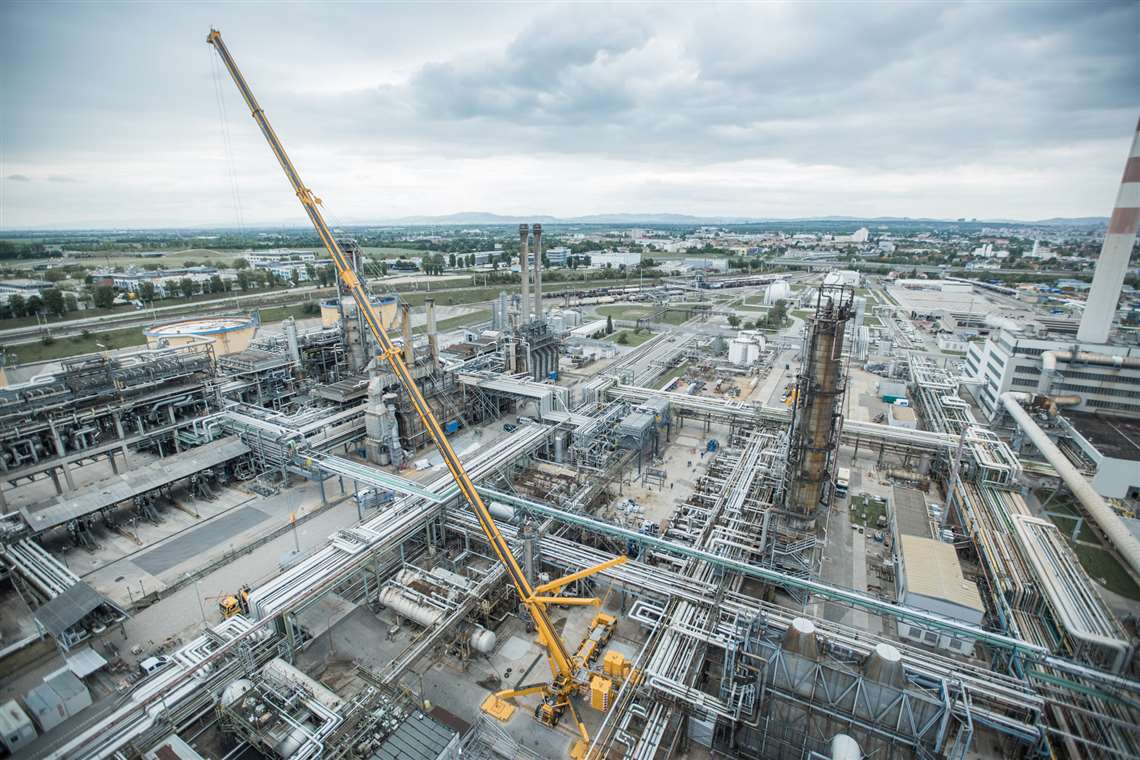 Austrian crane service provider Prangl has successfully completed a range of maintenance activities, including the replacement of a 13 tonne top section of a fractionating column, at a refinery in Vienna owned by oil and gas company OMV. 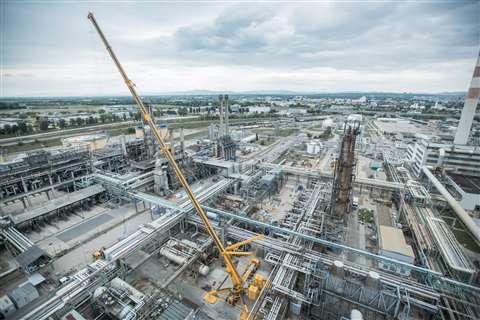 In order to minimise costly delays when lifting the new top section onto the fractionating column Prangl carefully planned every stage of the project carefully. This included an analysis of which crane was best suited to the job. “Whenever production operations have to stop at a refinery it costs a fortune,” explained Christian Fida, project manager at Prangl. “This meant that, no matter what, we had to avoid delays when lifting the top section onto the fractionating column… The available space would have been enough for a smaller crane with luffing jib but we would have had to set up a long section of the lattice part over a pipe rack. After analysing in detail the two possibilities, we opted for the main boom solution.”

As a result of these discussions, the crane Prangl selected for this job was its Demag AC 1000-9 all terrain crane from Terex. According to Terex, the Demag AC 1000-9 had enough lifting capacity to lift the load to the required height of 70 metres while still maintaining an adequate safety reserve. And at the same time, it had to be maneuverable enough to move through the refinery with its maze of pipelines. “Our Demag AC 1000-9 was the only crane that met both these conditions in their entirety,” added Fida. “The AC 1000 is our biggest telescopic crane, as well as one of the most powerful cranes in the world.”

Terex also said the crane’s ease of assembly made it particularly suited to this job. The Prangl technicians were able to pre-assemble the crane with the 100 metre telescopic boom, Superlift system, winch frame, and four outriggers in front of the refinery gates. Then the crane’s operator, Heinz Schuller, manoeuvred it underneath two pipe racks and on to the designated crane setup location. Once there, the 188-tonne counterweight was added and the outriggers were extended fully. With this configuration, the crane was ready to lift the top section, which weighed 13 tonnes together with the slinging gear being used, to a height of 70 metres with a radius of 60 metres so that it would be possible to install it on the fractionating column. “With that configuration, I could lift 3.5 tonnes more, which means we had more than enough capacity reserve for the refinery job said Schuller. “The AC 1000 is characterized by enormous precision and a colossal lifting capacity. This combination has proven to be invaluable time and time again when difficult project conditions are involved, as is often the case at refineries and other industrial facilities.”