With the global construction boom and offshore operations ever increasing, super strong cranes across the world have been lifting bigger and heavier loads than ever before. Niamh Marriott reports.

Offshore wind farms are demanding bigger cranes to handle the ever-increasing lifting height and weight of wind turbine components, and when it comes to heavy lifting, this sector is breaking records and completing seriously complex works. 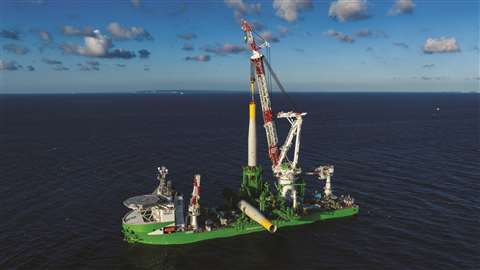 With a lifting capacity of 5,000 tonnes and a maximum lifting height of 175 metres above deck, the HLC 295000 is the largest offshore crane Liebherr has ever manufactured.

In July 2022 the vessel and crane were used to install 28 monopile foundations at the Arcadis Ost 1 wind farm in the German Baltic Sea.

The monopiles, with lengths of up to 110 metres and a weight of up to 2,100 tonnes, had to be moved and positioned for installation in the seabed.

The vessel can install the monopiles floating, meaning no jack-up process to get the ship out of the water is necessary.

A few weeks later, in August, Orion’s crane first set down the 1,300-tonne jacket foundation on the prepared seabed for the French offshore wind farm Fécamp after which a 2,200 tonne transformer platform was installed on the foundation.

“We are very proud of this lighthouse project and look forward to seeing the HLC 295000 in action. Our initial experience indicates that the installation times of previous vessels of about 3 to 3.5 days per monopile can be significantly reduced to 1 day per monopile with the use of the Orion and our HLC,” says Robert Pitschmann, global application manager at Liebherr-MCCtec Rostock in north east Germany. 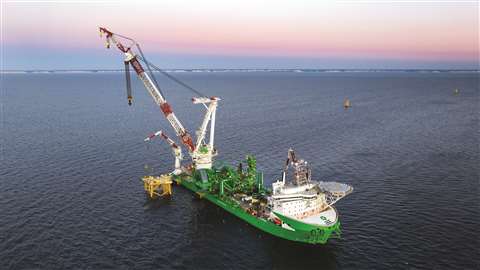 Installation of a substation at the French wind farm Fècamp Photo: Deme

“To ensure a sustainable energy supply for present and future generations, significantly more and larger offshore wind turbines are being built,” adds a Liebherr spokesperson, describing how it intends its heavy lift crane series to be used in wind farm work.

“In addition, there is a trend towards decommissioning disused offshore oil and gas platforms. This involves dismantling large and heavy parts on the open sea.

“By dismantling the old and building up the new energy, the HLC series can promote the energy transition at both ends.”

Energy from oil still has value of course, and lifting work is continuing on a large scale.

Both of its 10,000 tonne capacity Huisman revolving cranes were used to lift a 17,000 tonne module into place at the Tyra gas field in the North Sea.

It was claimed as a world record for the heaviest crane lift ever undertaken at sea. Sleipnir, built in 2019 by SembCorp Marine in Singapore, is 220 metres long and 102 metres wide.

Its total lifting capacity, combining its two 10,000 tonne capacity Huisman turret cranes, is 20,000 tonnes. They can operate individually or in tandem.

Even the auxiliary hoist lifts 2,500 tonnes to 60 metres radius. Maximum lifting height above the sea is 175 metres. 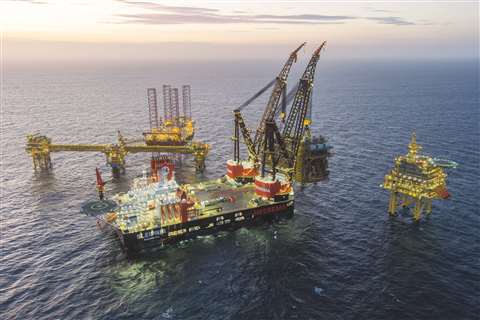 Also on board is a pedestal mounted lattice boom crane lifting 70 tonnes at a 12 metre radius.

Power is from 12 engines which can run on either low sulphur marine gas oil (MGO) or liquified natural gas (LNG) and each engine is rated at 8 MW.

The weight of the module is the equivalent of two Eiffel Towers, Heerema said.

Having travelled from Indonesia, Tyra TEG arrived on site, some 220 km off the Danish coast in the North Sea and good weather allowed the installation to take place the next day, four days ahead of schedule.

Having lifted it off the delivery vessel, Sleipnir sailed one nautical mile to the jacket foundation, raised the module 9 metres and lowered it onto its six legs.

Michel Hendriks, Heerema’s chief operating officer, says, “The safe and successful installation of the module is a fantastic milestone for Heerema and Sleipnir.

“The record-breaking lift demonstrated the vessel’s capacity to install enormous structures at sea.”

Mammoet has been chosen by GE Renewable Energy to supply onshore heavy lifting and transport for the staging and assembly of turbine components for the Dogger Bank Wind Farm in the North Sea. 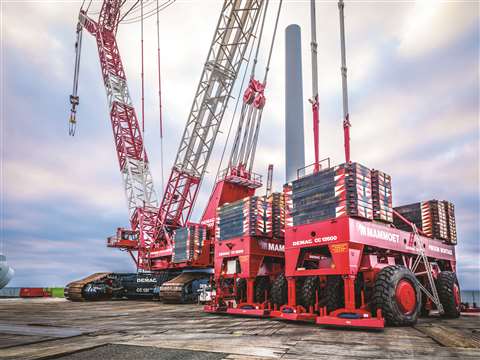 It will employ multiple lifting and transport crews for simultaneous operations to support with the loading of equipment and tower assembly in the marshalling harbour, a key piece in constructing the project.

The team will use both cranes and SPMT axles.

Highlighting the scale of the project, Nathan Fahey, GE project director for the Dogger Bank Wind Farm, explains, “The cranes and associated equipment the company will provide and operate for us will be essential to the smooth operation of our marshalling harbour, where 277 sets of blades, nacelles and towers of our Haliade-X wind turbines will be erected and in transit over the course of the project.”

Sarens is increasingly working in the wind energy sector. It was commissioned to lift and install monopiles 39 metres long and weighing 250 tonnes at Fryslân wind farm, on the biggest lake in the Netherlands, the Ijsselmeer.

The farm will comprise 89 turbines, each rarted at 4.3 MW. The shallow waters of the lake and restricted access to it via narrow locks called for a unique solution.

Sarens’ team designed a large spread to keep the draft at a minimum. A plan was proposed to use existing barges from the Sarens fleet, and couple them with the Sarens Modular Barges to create a barge more than half a football field, and was named the Sarens Soccer Pitch (SSP).

The SSP was assembled in a similar way to the Floating Foundation Installer (FFI) at Champlain in 2016, and was fully operational within six weeks.

It was then towed to the location of the wind farm. Modular beams were installed on top of the barges to spread the load of the main crane across the three barges.

Sarens and PSG Marine & Logistics Ltd announced earlier this year that the companies have partnered in a joint venture to deliver services to the offshore wind and renewables sector across Scotland.

The partnership will offer heavy lift and transport solutions, load in and out, assembly and port marshalling services.

Of course, many massive lifts are being completed onshore too, and Sarens has been involved with projects to move and install various bridges.

The company used a Zoomlion QUY260 crawler crane with the main boom in S configuration (41 metres) to lift a 5 metre high bridge onto a main road in Algeria for the Algerian Highway Agency and its client MNG MAPA. To watch a video of the lift click here.

Components and accessories companies are gearing up for the next generation of offshore wind farms.

Currently the largest supplied standard beam in the Modulift range, with a lifting capacity of 2,000 tonnes, the MOD 1100 is 30 metres long and has been ordered by a Belgian client.

The test was carried out in Modulift’s recently upgraded 2,200 tonne x 30 metre compression test rig and was third party witnessed by the client and DNV GL.

The whole operation was successfully executed over three days with individual tests carried out at 19, 20, and 30 metre spans.

Offshore operations are dominating the heavy lifting sector and demanding even more from increasingly powerful cranes. 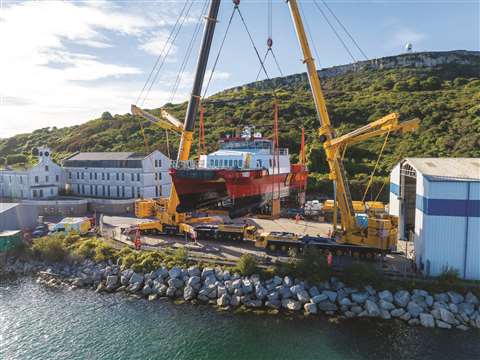 UK-based Ainscough Crane Hire assisted with the launch of an offshore wind farm service vessel the MO8, for ship building and marine engineering company Manor Marine in the south west of England.

The vessel, which was built for offshore services provider Mainprize Offshore, boasts a cargo capacity of 40 tonnes, seating for 24 passengers, 175 square metres of deck space and a maximum speed of 27 knots.

The 26 metre long vessel required two cranes (500 and 700 tonnes capacity) from Ainscough’s heavy crane fleet, along with a team of 14 over three days.

Making sure there was no structural impact to the vessel during its delivery into the water, the Ainscough team transported the MO8 while inside a container, meaning there was no direct contact between the crane and the newly constructed vessel.

Constructed on-site in Portland, Dorset, the MO8 was built near the launch site to allow an efficient and controlled transfer from land to sea. It is the first of three vessels that will be launched by Manor Marine.

Earlier in the year, Mainprize ordered another vessel of the same kind, MO9, due for delivery in early 2023.

The super-heavy crane is intended for the construction of Sever Bay Port terminal, in North Russia.

Kapitan Yakovlev delivered the cargo by a direct route from China. Due to early ice formation, Sovfracht’s ship was escorted by an icebreaker. 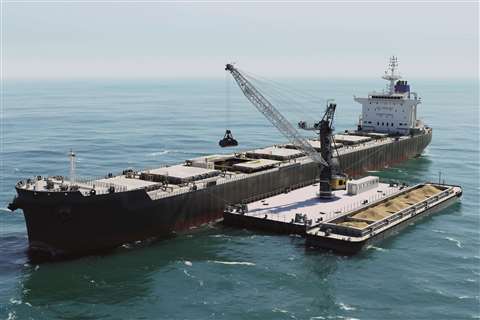 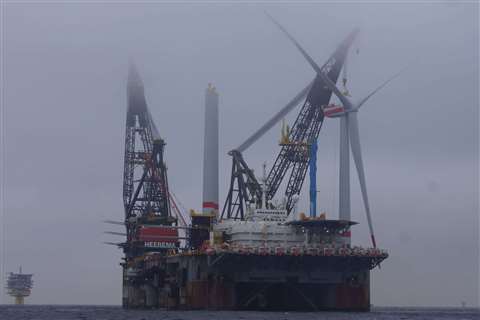 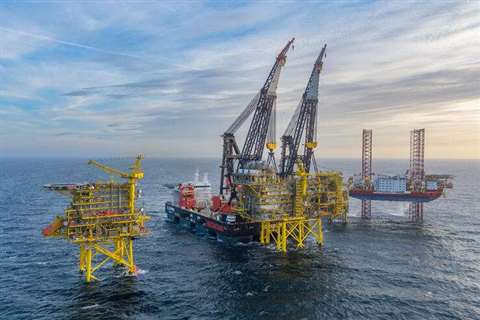 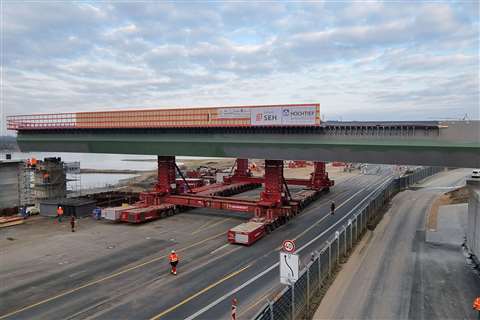