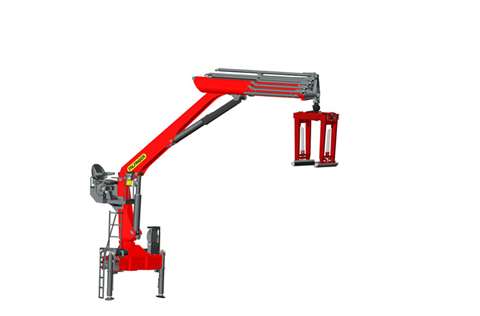 The L-crane series models have a 440 degree slewing angle, an internal hose guiding system and is easy to service

Crane manufacturer Palfinger has unveiled a redesign of its L-crane series and launched a number of new products. The launches were made at the 2014 IAA commercial vehicle exhibition in Hannover, Germany, which runs from 25 September to 2 October.

The L-crane series has a 440 degree slewing angle, an internal hose guide system and is easy to service, the manufacturer said. Another feature of the new models is a redesigned workstation, including new top seat and joystick control. A weatherproof roof and an LED or halogen working light can also be fitted. Optional is a Danfoss control valve. Other changes include a 15 % increase in lifting moment compared to previous models.

Also unveiled at the show was the Palfinger assembly kit for 3.5 tonne vehicles, the Palfinger Mounting Competence Centre (MCC). The kit is designed to install compact cranes on lightweight 3.5 tonne transporters much more easily and cost-effectively, the manufacturer said.

For easier assembly the longitudinal section of the platform substructure and the wear floor of the platform are cut out for crane assembly, a spokesperson said. In addition, the 120 mm cross rail for the stabiliser support system is assembled separately from the crane. Gernot Pichorner, Palfinger spokesperson, said, “This design means that the crane can be assembled, disassembled or transferred to a new chassis without any problems.”

Three power classes range from the Palfinger PC 1500 with a capacity of 990 kg to the PC 3800 rated at 2 tonnes capacity.

Also on show from Palfinger at the 2014 IAA is the P-Fold assistance system, an additional function on the PALcom P7 radio remote control. It is used to take over the crane movements until a defined working position is reached, the manufacturer said.

The new P-Fold assistance system is available for models in the SH model series. It also works with the rope tension control (RTC) system.