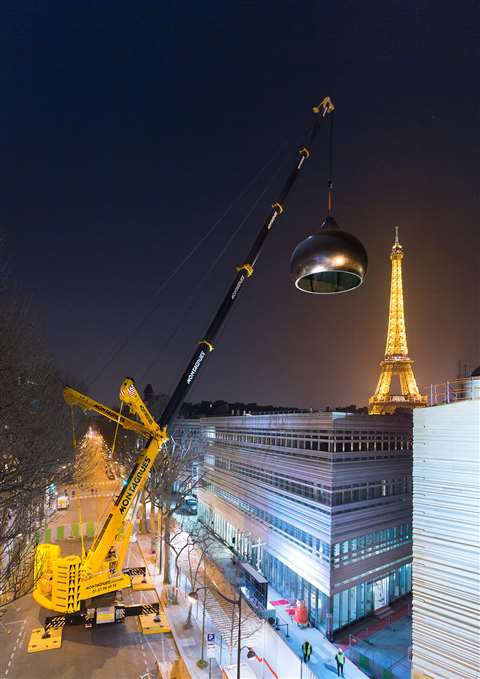 Paris, France-based crane operator Montagrues used its Liebherr LTM 1350-6.1 mobile crane to hoist and position the largest of five domes for a new-build Russian Orthodox Church in the centre of Paris.

The church, located near the Eiffel Tower, will be crowned with five domes covered with gold leaf on its completion. The largest dome weighed 8 tonnes and is 12 metres in diameter.

Since Russia's Deputy Prime Minister and a Secretary of State from the French government were to be present at the event, all the work and the site access were subject to very strict security precautions. The highlight of the preparations was a trial hoist of the glistening dome during the previous night, the company said.

Despite the fact that the road was closed, the Montagrues team had very little space available to deliver the six axle mobile crane and its accessories. In addition, several large plane trees on the sides of the road also made for major restrictions for the crane during its set up work, the company said. The tops of the trees were a hindrance to the telescopic boom and Y guying and some of them had to be shortened for the slewing process during the dome hoist.

It was not possible to transport the central dome as it measures twelve metres in both diameter and height. The dome was therefore manufactured on the site of a neighbouring new build. The onion-shaped dome had to be hoisted from there and placed on the new church around 30 m away.

Everything went to plan during the night time practice, which meant that the actual installation of the dome the next day was almost routine, said Montagrues.