Modern modular mine transported by Mammoet

To build BHP’s South Flank project, located in the Pilbara region of Western Australia, more than 1,000 components needed to be transported to site safely, on schedule, and in the right sequence. 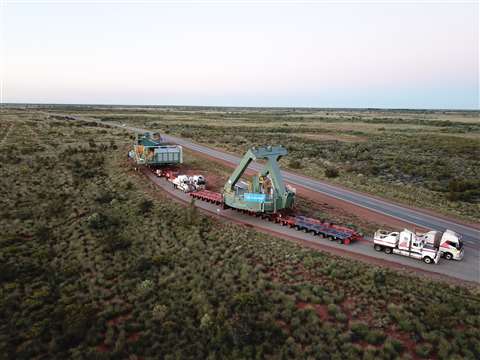 The items had a cumulative weight of over 29,500 tonnes

The items, with a cumulative weight of more than 29,500 tonnes, were transported 340 kilometres across the country by Mammoet.

The cargo was taken from the ship’s hook at Port Hedland and across a route largely consisting of public highways.

Transporting these modules in the largest possible pieces would reduce the time spent integrating them on site – but the maximum transport size is always limited by the width and condition of the route.

The biggest load delivered was 349 tonne module which was made up on the train load out bin gate and HPU module.

It was the heaviest load ever carried along the stretch of Western Australia’s Great Northern Highway.

Restrictions were also placed on when modules could be transported – any wider than 8.5 metres had to travel at night to have the lowest economic impact on the surrounding community and public road users. A rolling roadblock was also set up to shut down the highway in sections, minimising the transport’s impact. 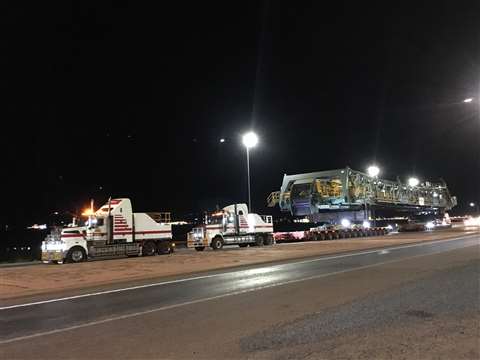 Modules wider than 8.5 metres had to travel at night

Pete O’Connell, senior project manager at Mammoet, said, “Engagement at the planning stage with EPCs can help to optimise how our package of work integrates with other workflows. It was particularly critical in this case – given the size and volume of components that needed to be on site in a specific order and timeframe for construction to proceed smoothly.

“We were able to advise the modularisation engineers on how to get maximum benefit from the load sizes possible on the route, in terms of their overall dimensions and the maximum weights to cross structures such as bridges. We were then able to plan from the very start the equipment and expertise we would need to best carry out the work.”

Mammoet used a specially-built trailer type to minimise the weight of the transport equipment itself and therefore increase the size of module that could be carried.

Overall weight limitations on Australian highways meant a lighter alternative to the traditionally used 4-file platform trailer was needed to avoid reducing the size of the modules themselves.

Smaller module sizes, of course, mean more transportations – and in turn additional transport and integration costs. Mammoet’s equipment inventory was put to good use in devising a 3-file trailer solution. This allowed the desired size of module to be transported within local regulations.

Delivery of such a large scale of transport work was already a significant challenge within the planned 15-month timescale, but due to delays earlier in the project schedule this cargo needed to be transported in a shorter timeframe. 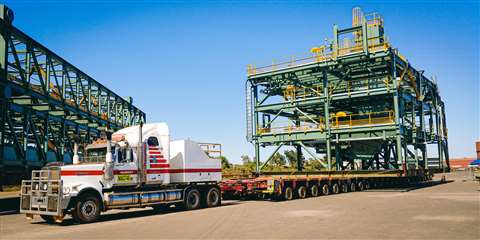 Then the pandemic hit. Despite new travel restrictions, Mammoet used a team of 90 people working across day and night shifts to keep things on schedule.

O’Connell added, “Flexibility is always key in large projects such as this, as changes in project schedules are to be expected.”

The mine has created more than 2,500 construction jobs and 600 ongoing operational roles.

Wouter Mink, managing director of Mammoet Australia, said, “We are delighted that South Flank delivered first ore during May 2021. This project helps to continue our commitment to the Pilbara region. 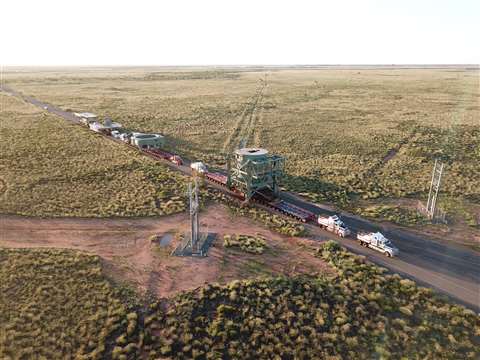 The items were transported 340 kilometres across the country by Mammoet

“The transport package was always going to play a key role in achieving this, and we were pleased to have delivered this successfully despite the challenges we faced, including a global pandemic impacting on how, when and where we could source our team.”

Heath Tyler, BHP South Flank area project manager, added, “The South Flank project represents a major investment by BHP and a key element in our strategy for the region. With the transport package playing such a critical part in achieving a successful build, we needed a partner that had the proven expertise and equipment. Mammoet has proven a great fit for these criteria.” 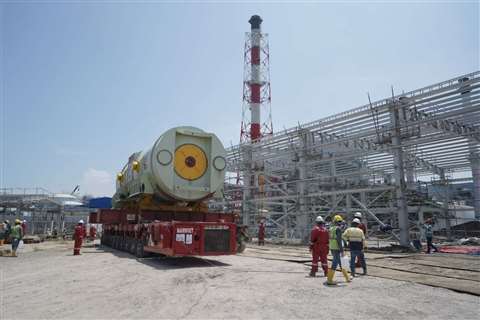