Built in 1926, the locomotive is a key attraction for the railway. It’s over 12 metres long, and 3.84 m high; its working weight with a full boiler and tender (or coal-car) is 100 tonnes.

In order to lift the locomotive Modulift bridged its buffers with a lifting beam. This was because there weren’t any suitable points for the [20 tonne capacity] jacks and their sloped bases prevented them from being positioned close to the locomotive. Further, the jaws of the jack were off the ground, which stopped Modulift from sitting a beam directly on top of them because then they would not have fitted under the buffers.

The 3.5-metre-long beams offered a 2.8 m operating span and weighed 585 kg each. They were single part weldments so assembly was not required. The end plates, with an inverted L-shape, allowed the beam to sit upon the locomotive jacks in a dropped position. This ensured that the beam could still get underneath the buffers when the jacks were in their lowest position while still offering enough stroke to lift the locomotive to the required height for access underneath.

Graham Froud, workshop manager at Swanage Railway, said, “This is the first time this locomotive, which we brought into the workshop on a low-loader, has been lifted this way; all other lifts would have been done from above. The locomotive does approximately 10,000 miles a year. It can run for 28 days at a time, at which point it would be due a boiler examination. It is also able to undertake mainline work all over the country, if and when required. There are only a small number of locos that can do this. Modulift’s management of the whole project was first rate from start to finish.”

The locomotive, which was built in 1926, needed to be lifted free of its wheels 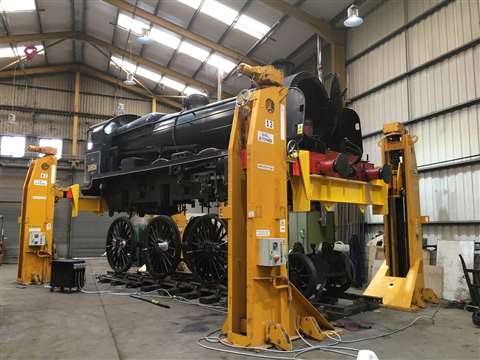 The locomotive’ was lifted using lifting beams between its buffers 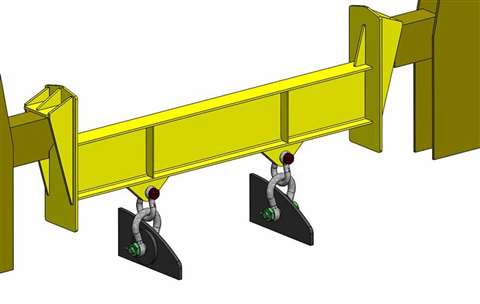 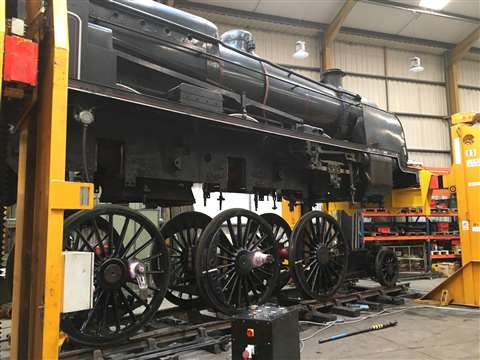 The end plates, with an inverted L-shape, allowed the beam to sit upon the locomotive jacks in a dropped position