Typifying the current boom in the loader crane market is Dutch manufacturer Hyva which extended its range of hydraulic loader cranes with three new models at the end of 2017. The new models are the HC951, HC1151 and HC1651, rated at 95, 115 and 165 tonne-metres, respectively. Typical applications are in the rental service sector for multi-purpose loading activities with specialist driver-operators, explained Davide Catellani, Hyva director, cranes. “They also meet the requirements for heavy equipment and materials lifting in the oil and gas, mining, logistics, defence and construction sectors,” Catellani continued. 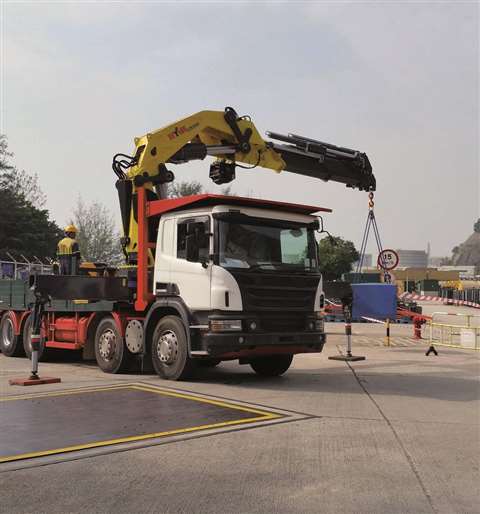 Another feature of the design is an integral base that allows the crane to be mounted directly to the truck chassis, reducing height and lowering the centre of gravity. As an example, the HC1151 with eight hydraulic extensions has a reach of 19.52 metres. Included is an automatic lubrication system to simplify maintenance and help maximise resale value.

In Sweden, buoyed by the success of its ePTO electric plug-in-system and Moffett E-series electric truck-mounted forklifts, on-road load handling equipment provider Hiab has continued focusing on maximising the eco-efficiency of its loader cranes. At the end of 2017 it launched the cyclone oil tank which, it claims, reduces oil usage, weight, space and running costs. “The patented technology introduces a new generation of efficient hydraulic oil tanks,” says Joakim Andersson, Hiab senior vice president, loader cranes. “The tank uses a cyclone system to remove air from the hydraulic oil returning to the tank, which is up to ten times more efficient than standard systems. The technology allows oil to be circulated and filtered more often, so that the size of the tank can be reduced. So, for example, instead of the 250 or 300 litre oil tank you would expect to find on a standard truck mounted with a loader crane, we can now fit a 100 litre cyclone tank. This reduced size and weight allows the truck to reduce its fuel consumption and lower its carbon dioxide emissions by up to 600 kg a year. The tank size and weight reduction also gives additional cargo capacity, plus the advantages of lower oil usage of up to 60 per cent, and a more durable hydraulic system, so operating costs are reduced too.”

Hiab is also investing in R&D by opening a new addition to its Test and Innovation centre in Hudiksvall, Sweden. Called the Vision Lab, it is designed to enable new imaging, vision and object recognition systems to be tested under a wide range of conditions (snow, ice, rain, fog,  changing light etc). Hiab says the Vision Lab is the next step in the journey to fully automated machines and its end goal is to improve existing sensors and create new smart sensors for all Hiab product lines.

Another area of research, Hiab says, is how to improve service and maintenance on its machines in the future through the use of augmented reality (AR). “At Hiab we are the pioneers in this industry. Investing in research centres like Vision Lab and Hudiksvall Test and Innovation Centre show that we want to be at the forefront of this industry,” comments Hiab’s Joakim Andersson, senior vice president, loader cranes. “With HiVision, your crane cabin is replaced by a machine vision system. Using high-quality cameras, the view from the optimal vantage point is captured. The operator uses a Virtual Reality (VR) head-mounted display and sees a clear view of the loading area from the safety and comfort of the truck cabin.”

Hiab says that since its launch in 2016 it has sold HiVision to customers from more than ten countries. “We are eager to develop new features in this new Vision Lab that help our load handling customers to be successful in their work,” Andersson adds.

Austrian loader crane manufacturer Palfinger is also investing in R&D. The company opened a new site at the weXelerate startup hub, located in the Vienna Design Tower, Vienna, Austria in November 2017. According to Palfinger, weXelerate is Central and Eastern Europe’s largest business incubator and it incorporates a development team, together with selected startup companies, which will work on the latest Internet of Things trends for the construction, transport and logistics industries, amongst others.

Do more with less

Palfinger says there are two choices for the PK 135.002 TEC 7’s carrier vehicle: a four-axle truck with a permissible total weight of 32 tonnes, which leaves 2,500–3,000 kg of free payload; or a five-axle truck with a total weight of 40 tonnes, which leaves up to 8,000 kg of free payload. No permissions are required for special transport operations with back-up vehicles, nor are there any route restrictions, says Palfinger.

The Weigh assistance system allows crane operators to weigh the load directly using the crane, Palfinger explained, providing them with an overview of the positions to which they can lift the load. Palfinger said this makes the crane operation more efficient. The Weigh function also allows the data of the last ten weighing jobs to be stored, providing an overview of operations.

Both systems can be activated by radio remote control. In addition to the PK 135.002 TEC 7, the Mext and Weigh systems can now be specified on Palfinger’s PK 165.002 TEC 7 and PK 200002 L SH heavy duty loader cranes and on all of its TEC 7 loader crane models.

Another new development from Palfinger is its new MFA jib which increases the maximum reach of its TEC crane series by 5.5 metres. Rigid and swivelling versions are being introduced. The optional angle adjustment of between +20° and -60° makes it possible to perform operations above projecting edges that were previously inaccessible for the crane, says Palfinger.

The MFA jib has a lifting capacity of 350–650 kg and can also be used for rope winch operation. It is connected to Palfinger’s standardised multifunction adapter (MFA). Palfinger says that the advantage of using this universal connection is that all attachments can be secured and exchanged quickly and easily. “The MFA jib is the perfect addition to the PK 200002 L SH with PJ 300,” comments Josef Lierzer from Hierzmann Transporte in Unterpremstätten, Steiermark, Austria – one of the first crane operators to use the MFA jib. “It is easy to use and impressed me right from the start.”

The MFA jib is integrated in the electronic high-performance stability control system (HPSC) using Palfinger ’s new Tool software function. Tool, it explains, enables the various additional devices connected via the MFA to be included in the calculation of the stability limit for P-Profile cranes. The MFA jib is available for all cranes in the TEC series and for fly jibs with P-Profiles. 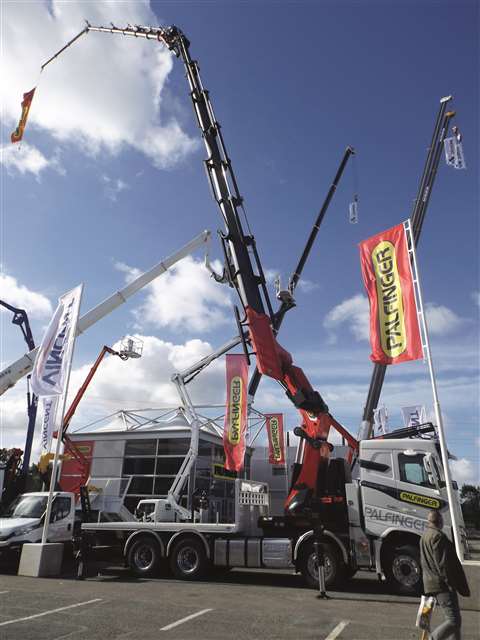 The HMF Group, a manufacturer of truck-mounted cranes and cranes for the wind turbine industry based in Højbjerg, Denmark, is also investing heavily in technology. “Quality is very important to us, which means that all main processes are gathered here in Denmark, where we can answer for all processes,” says CEO Brian Stage. “This is why we also invest heavily in capacity and technology to follow the demand in the long term.”

For example, the company says it has extended its R&D capacity and invested in a brand-new production line for knuckle booms, where they are manufactured in one single work flow, before being sent to the fully automatic paint facility. As a part of the new production line, HMF has also invested in a new drilling centre capable of handling very big items.

The company also says it is phasing in a new welding robot that uses new technology with adaptive welding and a fully automatic conveyor system.

HMF also reports increased demand for larger cranes. As a result, it has ordered a new fully automatic pipe bending machine for hydraulic pipes to ensure it can supply enough jib extensions to meet demand. “At the same time as we are investing heavily in new processes, facilities and staff, it goes without saying that we also optimise where we can,” adds Stage. “For example, we have gone through our entire range of sub-suppliers and changed from yellow chromate to zinc-nickel treatment on sub-components to further enhance quality.”

HMF is also promoting its safety technology. It says  its EVS (Electronic Vehicle Stability) system calculates the extent to which the load on the back of a truck can also serve as a counterweight, allowing the operator to maximise capacity while eliminating any risk of the vehicle toppling.

Italian loader crane manufacturer Effer has utilised the connectivity of technology in its new RACE (Remote Assistance Control Effer) product. RACE is an optional function of Effer’s Progress 2.0 electronic management system which allows users to  connect to an Effer crane from a computer, smartphone or tablet device. This means that users can monitor the activity of a crane or Effer fleet at any time.  It also allows loader cranes to be located on a map, their route to the jobsite is displayed and work times can be analysed, along with the use of any accessories. Scheduled maintenance can be checked or required maintenance booked. Effer service points can also remotely connect to cranes to diagnose and remedy any problems.

So there we have it, a healthy sector with a plenty of activity taking place. Its’s heartening to see that manufacturers are being proactive and embracing technology – not just for the future survival of their businesses but to enhance safety and increase productivity for users today.

HMF has developed a new muck away crane for the UK market specially designed for heavy and continuous grab work. According to HMF, the crane has a maximum hydraulic reach of more than 8 metres and a slewing range of 440º. It has dual mechanical crane functions and two operating platforms with access between the two operating points via a catwalk.

Crane control is provided by a Danfoss PVG32 control valve with load sensing while HMF says a dual slewing system provides high torque forces with a full load on slopes up to 15 percent. The chain drive allows the cylinders to work simultaneously for maximum efficiency, says HMF. The crane has HMF’s RCL5300 safety system, which monitors all movements so that the vehicle stays stable and the crane always only works within the permitted load. The crane also come with HMF’s HSL-Q safety system, which creates a virtual cage that the crane cannot move into to protect the operator. All safety systems are in waterproof boxes, so they work in all weather conditions.

The crane is available in two versions: HMF1310R-MC with manual control; and HMF1510R-RCS with remote control.

The muck away crane has a reach of over eight metres

UK transport and logistics company Allens Transport, based in Stourbridge, West Midlands, has bought a Fassi F820RA.2.26 xhe-dynamic loader crane, which was delivered at the beginning of May.

The crane is installed on a Scania G450 8x2 Rigid truck. The vehicle has bespoke bodywork and Fassi’s FSC-SII stabiliser monitoring system. The crane is capable of lifting 3.97 tonnes at 16.15 metres and 16.4 tonnes at 4.35 metres.

The truck was supplied by Keltruck and the crane was supplied by the Fassi main dealer for the North-west of England: The Crane Centre. A custom decal on the visor of the cab is in memory of the family’s beloved labrador, Shadow, who passed away recently. 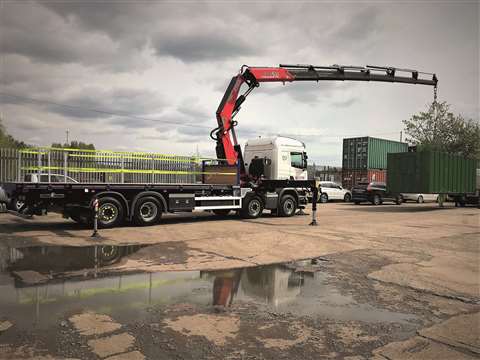 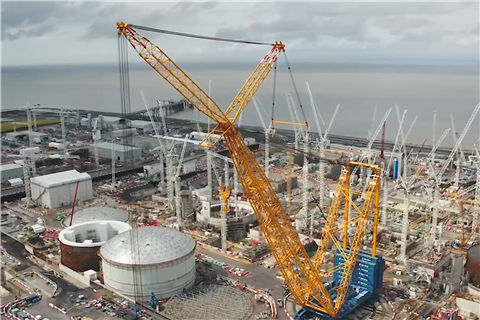 What were the top 10 crane stories from 2021?
With Covid-19 continuing to cast its shadow across the world, it has been another challenging year for the global crane industry 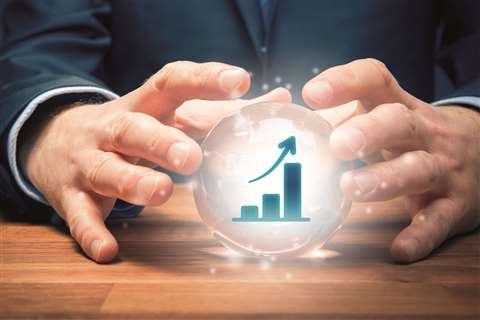