The world’s biggest land-based crane, Big Carl, this week lifted the final liner ring into place at one of the nuclear reactors being built at the Hinkley Point C power station site in Somerset. Lucy Barnard finds out how.

EDF Energy, the power company which will operate the reactor, said that still wind conditions on the Somerset, south west England, site in the early hours of Monday 12 December created ideal conditions for the Sarens SGC 250 super heavy lift ring crane to complete the historic lift. 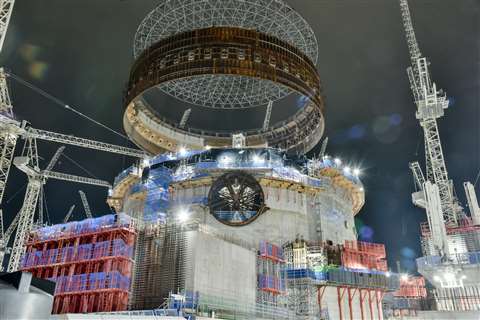 It is the third and final ring to be installed on the building, which will eventually contain one of Hinkley Point C’s two nuclear reactors. The unit has now grown in height by 11.6 metres and stands at 44 metres.

The liner ring, which was prefabricated in a factory on site, also includes supporting brackets for a polar crane – a bridge crane installed inside the reactor building which will rotate 360° above the reactor and be used for refuelling.

BYLOR, the main contractor on the site, a joint venture of Bouygues Travaux Publics and Laing O’Rourke, has now completed all of the reactor building except the iconic dome-shaped ‘lid’ which is already completed and is scheduled to be lifted into position in 2023.

Not only is Big Carl the world’s strongest land-based crane, able rated at 5,000 tonnes, the giant lattice boom ring crane is also the tallest. Big Carl’s main boom can be extended from 118 metres to 160 metres and its jib can be a maximum of 100 metres, giving a maximum height of 250 metres, nearly as tall as the Commerzbank Tower in Frankfurt, Germany.

Big Carl’s components and lifting equipment include a ring weiging 347 tonnes, a hook block weighing 58 tonnes, a novabeam of 72 tonnes and tackle and chains weighing 66 tonnes.

The crane can move around the site on his own 6 km railway tracks, carrying loads to three lifting positions comprising 48.5 metre turning circles and spin around completely, making it the only crane in the industry able to relocate fully rigged, from one spot to another, Sarens said. 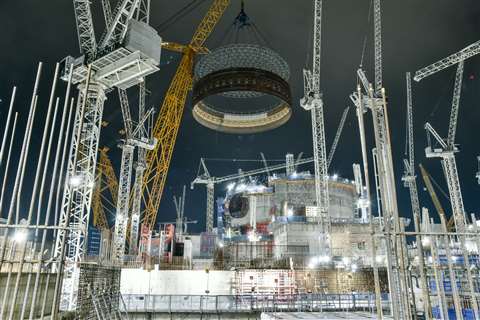 Nonetheless, at Hinkley Point C, the site’s lifting team said the machine only usually undertakes around 20 of the 1,000 lifts a month, with the rest completed by a team of around 50 tower cranes, most of which are electrically powered.

Like many cranes, Big Carl’s operator relies on the slinger signaller and lifting supervisor to be eyes and ears on the ground. They communicate with secure radios because they can’t be interfered with when relaying communications.

The facility will be the first nuclear power station to be built in Britain for 20 years. Its twin unit EPR (Evolutionary Power Reactor) will be capable of generating 3,260 MW of electricity for 60 years.

In 2023, BYLOR plans to install the reactor pressure vessel into the reactor building and complete more of the turbine hall which will eventually house the Arabelle steam turbine – set to become one of the world’s most powerful steam turbines. 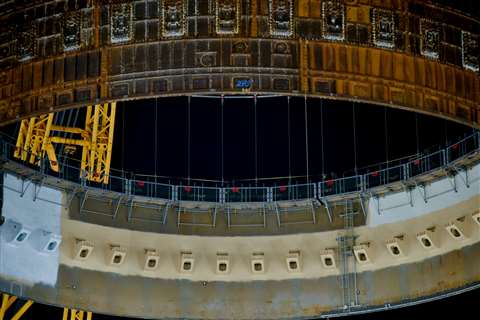 Work started on 29 September 2016 on Britain’s largest and most complex civil engineering project since the Second World War and was originally scheduled to be completed in 2025.

Since then, however, the project has faced delays, mostly caused by the covid pandemic.

In January 2021, EDF announced delays arising from the pandemic would increase the cost of the project by £500 million, to £23 billion, and delay the start of electricity generation from unit 1 by six months, to June 2026. Then, earlier in 2022 the company confirmed there would be a further year long delay and a £3 billion cost increase pushing the start date for the unit one reactor back to June 2027 and total costs to £26 billion. 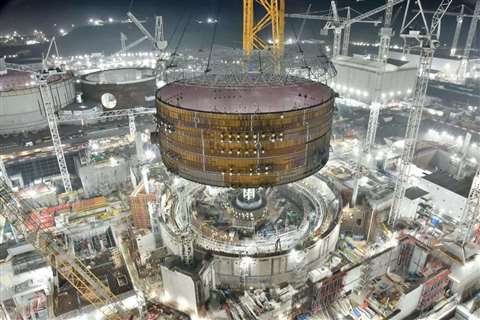 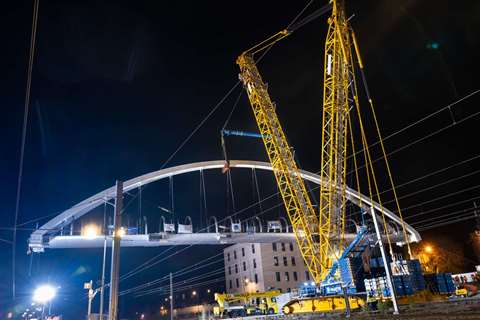