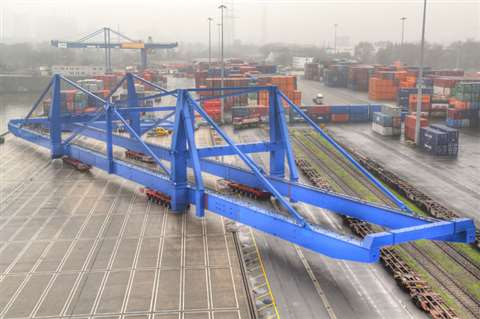 A 630 tonne dockside gantry crane was relocated as part of Duisburg Harbour's upgrade in Duisburg, Germany.

The upgrade will increase the harbour's container handling capacity from 1 million standard containers to five million, a spokesperson said. To help achieve this, four additional container cranes, an extra 13 hectares of shipment and storage area, and the relocation of the gantry crane, is to be carried out.

The self propelled modules have hydrostatic drive, electronic multi-way steering and a payload of 45 tonnes per axle line. To increase the payload, the two four-axle modules were combined with three-axle THP heavy-duty modules, a spokesperson added. Power was supplied by four power packs with an output of 155 kW (210 PS) and 360 kW (490 PS).

The crane was 139 metres long, 20 m wide and 18 m high. It was turned 90 degrees to create a waterside outreach of a 15 m, a spokesperson said. Tim Kruse, who helped manage the project, said, “That was a special challenge for us. Manoeuvring a crane of that size in such a tight space with almost centimetre precision is a tall order.

“Manoeuvring so close to the quayside is always a little bit dangerous. So the six additional THP axles provided a margin of safety that permitted us to slightly reduce the axle load on the individual PST modules.”

To relocate the gantry, the crane was raised 300 mm and rotated 90 degrees using the modules, before being repositioned on girders. Once in place, eight heavy-duty cranes were used to lift the portal crane into its final position. The harbour was closed during the process.