Erik Geene, the new vice president of business development at Sinoboom’s European subsidiary, and Tim Whiteman, its CEO, explain how they plan to expand the brand across the continent. 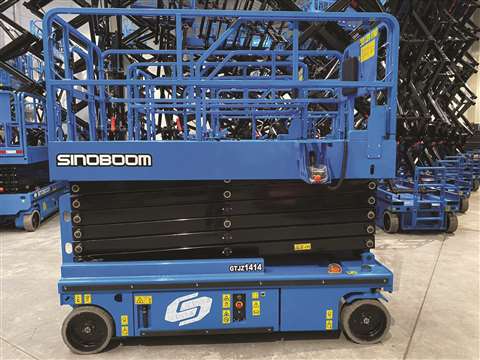 Sinoboom’s European subsidiary officially opened its doors on 1 July, when the keys to its new headquarters in Rotterdam, the Netherlands, were handed over.

On the same day Sinoboom North America was also taking procession of its premises in Houston, Texas, for which Kolin Kirschenmann has recently been named CEO. Together, the subsidiaries mark a major investment in the two largest global access equipment markets by their parent company Sinoboom Intelligent Equipment, based in Changsha, China.

The work to introduce Sinoboom’s products to the European market began two and a half years ago, when the manufacturer appointed established access equipment supplier Liftstore, based in Poland, as its partner in the continent. Apart from brand promotion, one of Liftstore’s roles was to expand the Sinoboom network across Europe and thus far has signed up distributors in Italy, Germany, Greece, Spain, Belgium and Scandinavian countries.

Liftstore, which is owned, alongside sister rental company Gizo, by their CEO Grzegorz Niewinski, will continue in the same role, but concentrate its efforts in the east, as Eastern Central European dealer. It will be overseen by the Sinoboom BV headquarters in Rotterdam, which will focus on Western European, including the major markets of France the UK and German speaking countries.

Heading up Sinoboom BV is Tim Whiteman, formally CEO of the International Powered Access Federation (IPAF), who took the position in December, and Erik Geene, who was announced vice president of business development at the end of June. Geene is an access industry veteran, having started his career in 1992 at the very same building that Sinoboom is based in. The facility was used by Genie distributor HDW and Geene was first employed there to run errands and learn the ropes. It is now ideally suited to its new role as Sinoboom’s logistics and support hub.

Geene soon worked his way through the ranks at HDW, from service and parts to sales, before Genie asked him to work directly for them in 2004. He stayed with the manufacturer until 2018, in a range of roles that saw him become a director of sales across Europe, as well as taking on responsibilities in service, finance and used equipment.

In 2018, Geene was approached by Sinoboom to expand the brand across Europe, with the help of strategic partner Liftstore, for which he became COO. Geene says it was the vision of Sinoboom’s owners, husband and wife team Guoliang Liu and Susan Xu, that attracted him to the role. “I was inspired by the belief they had in the brand and the dream they have in Europe. And I worked with them to build up Lifstore in Poland. And during that time, I have become impressed by the constant high level of quality of the machines.”

He adds, “Lifstore will remain one of our partners and mainly concentrate on the east side of Europe. They are based in Poland and we are based in the Netherlands, so if you look at it geographically, it’s a perfect fit. In my new position I can roll the brand out across Europe and that is what I am really looking forward to doing.”

Another factor that attracted Geene to Sinoboom is that it is privately-owned, setting it apart from many other Chinese companies, which have varying degrees of state ownership. “That had a big influence on me in the decision to start working with their products.”

Although the journey thus far hasn’t always been easy, much of the groundwork has been laid, says Geene. “Two or three years ago, Sinoboom was perceived like many other new brands from China. But in those years, we have done a lot of work in Europe with the team and we have taken those first steps. “If you talk with MEWP customers, we are now seen as one of the future successful brands in Europe, and that is due to the culture of the company and the quality we deliver. That is the basis on which you start a successful company.”

In addition to the complexities of entering a long-established market, there are unexpected challenges, like those brought about by Covid-19, that just a few months ago were beyond the imagination of most people. Geene, however, sees opportunities among the obvious difficulties. “Every five, seven or 10 years we have a crisis or a downturn, or a period of low growth. I have seen this two or three times in my career, and each time it takes two or three years for the industry to rebound. Today, it is a major challenge, particularly for the rental houses. Although, for us, at Sinoboom, I see it as a chance to start a new brand and introduce a new face to the industry.

”Of course, we also have our challenges. For example, there will be less purchases of new equipment, so you have less opportunities to win a deal. But I think, in this case, it will recover within one or two years because the market will absorb the existing machines and they will need to be replaced – there will always be replacement. And if you look at the market in general across Europe, there are still countries with growth potential. So, I am not so negative about the current situation.” 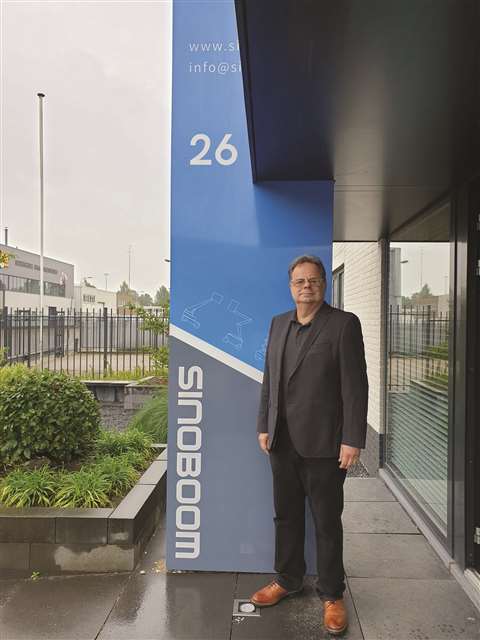 Geene and Whiteman are also very clear that Sinoboom is in Europe for the long haul and has chosen a gradual approach. “The main thing for us is the strategy and the team of people that Tim is going to put in place in the next couple of years and the product line. We do not have a full product line yet, but we will do,” adds Geene.

As Whiteman adds, the company’s attention to service and parts provision will be crucial to its success. “To be an integral part of the European scene, we need to be seen as a European supplier, with full European service, supply and a back-up team.” In this light, Whiteman aims to have a fully functioning service, including 24-hour parts delivery, this year.

Part of the strategy is to expand on the experiences of the coronavirus pandemic, during which we have all got used to communicating remotely. As such, one of the rooms at the Rotterdam headquarters will be converted to provide full back-up and support remotely to its customers, whenever it is appropriate.

To help achieve these aims, the company recently appointed Danny Wesselius as its operations manager. He has 20 years of experience in the rental business, managing support teams in the field and will be an important asset in developing remote support to complement the growing network of service providers across Europe. By the end of this year, the subsidiary should have 10 full time staff, with more appointments next year, and a rotation of technical staff from the factory in China.

As far as both Geene and Whiteman are concerned, Sinoboom’s slab scissors have already reached the required level of quality, which is why orders are gaining pace in Europe. The plan is to complete the full Europe-ready hydraulic and direct electric drive slab scissor line this year and offer 16m and 18m working height electric articulating boom lifts, along with a couple of vertical mast models, by August or September. This will be followed in time by RT scissors and the full range of articulated and telescopic booms. There will also be a keen focus on hybrid and electric-powered equipment.

One of Geene’s key roles is in product development and as he describes it, giving the customer’s voice back to the manufacturer in China. This involves bringing existing equipment from the Sinoboom factory for testing and appraisal from potential customers in Europe and feeding that back to the design team in China.

Sinoboom already has a full line of scissor and boom lifts in China, across the working height range, including spiders and truck mounts, but Geene explains, “In my mind it is not all ready for the European market yet.” 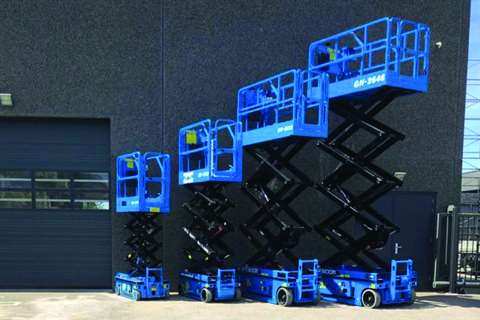 He adds, “What also attracted me to working with Sinoboom is that they are an access equipment specialist. This is an advantage, and as a specialist in access equipment, you need to have a full line, otherwise you cannot survive and it would be the same for our partners. But you can’t have a full range with the right quality level in a couple of years; it takes time. We will take small steps. Our goal is to be a premium quality supplier.”

As Whiteman and Geene repeatedly make clear, this is not a race and high volumes at low cost are not the company’s aim. “Of course, you can grab the market if you drop the price, but that is not our strategy at all. We are not the cheapest and we never will be. And, what I have learned over the past 20 years is that volume is not the key to everything either. We want to increase volume but we need to be seen as a quality brand.”

Nevertheless, Sinoboom scissors have found a growing customer base in the continent over the last two years. “We have sold in 10 countries and it is growing every week. We are doing deals, not big deals, but from the experience these new customers have of our equipment, they are talking positively in the market about it. The key accounts are another story and that is something we will start to work on now too,” says Geene. 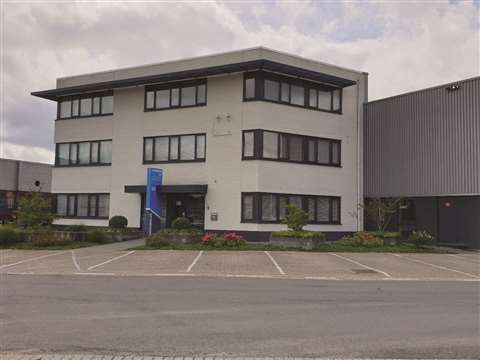 With a former CEO of IPAF, there is also a strong commitment to safety and training at Sinoboom, which is reflected across the company and can be seen in its approach to Covid-19.

As Whiteman describes, by the time the coronavirus hit Europe, the company had gained experience of ensuring the safety of its employees in China. It joined the national campaign in sending PPE and other equipment to Wuhan, the epicentre of the crisis. As the virus reached Europe, Sinoboom sent large quantities of face masks to those who might need them across the continent. This focus on safety was driven by the owners and reflects their approach to business and product development says Whiteman.

Finally, I ask, would Sinoboom consider acquiring manufacturers or other related companies in Europe or beyond, or set up manufacturing facilities of its own outside China? Whiteman doesn’t give anything away but is clear in his response. “The company is looking to be a global player and is investing where necessary. It has made a serious financial commitment to become a long-term, established part of the European and the North American markets. That financial commitment is there to grasp whatever opportunities arise.