Gemini Power Hydraulics is helping to change the way India uses working at height equipment, thanks to its range of plans and products. Euan Youdale spoke to company director Aahan Sethi.

As with many emerging nations for access equipment, India is on the cusp of major growth akin to China’s booming MEWP market of recent years. 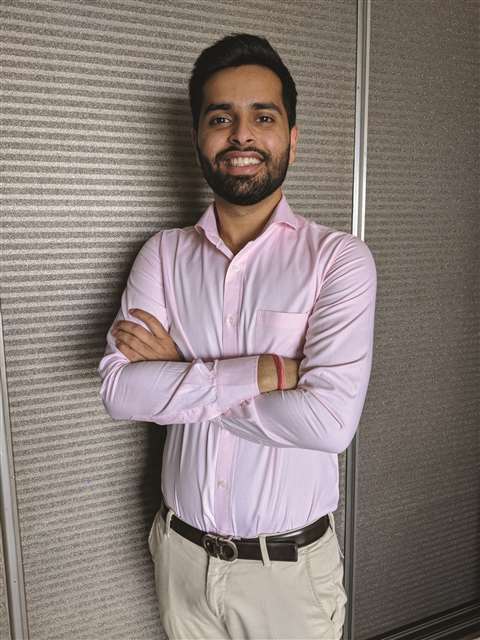 Indeed, India shares many of the characteristics associated with fledgling access equipment markets and, as you would expect, has some of its own.

Ideally placed to observe the changeable aerial lift trends in the country is Gemini Power Hydraulics. The company has been in the industry from the start and rather than jumping on the MEWP bandwagon, it has played a significant part in jump starting it.

Aahan Sethi, a director at Gemini, represents the second generation of the company. It was founded by his father Rajiv Sethi in 1989 as a sales and after sales service for Enerpac products, specifically hydraulic jacks. As the years went by the company expanded into a range of sectors, including shut down and turnaround services for Oil & Gas. In 2011, it then moved into heavy lifting with a joint venture with Fagioli until the Italian company started its own entity Fagiloi India. It has also ventured into niche industrial products and services such as crimping tools, with a separate company.

Eight years ago Sethi set his sights on a new wave of products known as aerial work platforms, and in 2010 partnered with Haulotte to exclusively distribute its range in India. Eight years down the line Gemini professes to be the market leader for the sale of self propelled booms in India.

In the process of building its MEWP division, Gemini decided to broaden its scope to tracked platforms and vehicle mounted vehicles, as well as manufacturing its own underbridge maintenance units.

At present the company exclusively distributes Palazzani tracked platforms. For vehicle mounts it has partnerships with Italy-based CTE and France-based Klubb. As far as Klubb is concerned, Gemini has recently started its own production of related products, using Klubb’s platforms, including truck mounts, van mounts and pick up mounts, on locally produced chassis.

“Until a few years ago, everything was done manually, for example using ladders, poles and scaffolding to change bulbs in street lighting,” says Aahan Sethi. 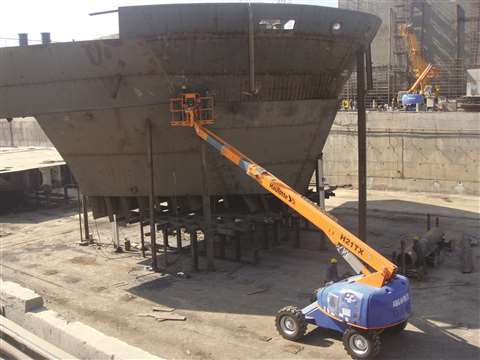 When the current Government in India took power in 2014, there followed a major emphasis on technology in various spheres, with the goal of creating a more digital India and Smart Cities using modern communication and related-equipment.

“Part of that process was to completely revamp our existing infrastructure systems. That meant, all the existing traffic lights had to be changed to LED, for example, to reduce power and save electricity. Then they decided to create a smart system in which cameras were installed at every junction.”

Such initiatives continued to be rolled out and contracts were made but it was not happening at a good enough pace for the government’s liking. “This was simply due to the fact the machinery being used at that time was not good enough to do the work.

“And some local companies used simple telescopic platforms but with no regard for safety. The buckets were non-insulated, they had open cages and there was no hook and there was no harness. The operator had to pray that they came back down safely.”

Operators were also using very heavy-duty chassis, two or three times the actual weight required, weighing in at 7 or 11 tonnes. “In Mumbai, like most cities, traffic is heavy and efficiency is paramount, you cannot afford to take up a lot of lane space. Another drawback was these vehicles were just equipped to do the lift work, they had a separate cargo van behind, that was carrying all the equipment.

“So, in short, to change one lightbulb, you require a lift plus a secondary van to carry all the different equipment and you needed six people to do it.”

Gemini is concentrating ist efforts in Mumbai, as well as Delhi and Hyderabad and looking at other smart cities such as like Nagpur and Pune. Sethi adds, “It was good that we have moved away from the more traditional practices, but how do we further improve it to make things better?” The idea to provide an easier alternative, including the van mounted platform, stemmed from this quandary.

A great deal of research followed, with the end result being the partnership with Klubb, and specifically its 12m working height K26 van mount, which Gemini has chosen as the first model to be introduced to India. “The beauty is that most of their components are compatible with all Indian chassis,” says Sethi. 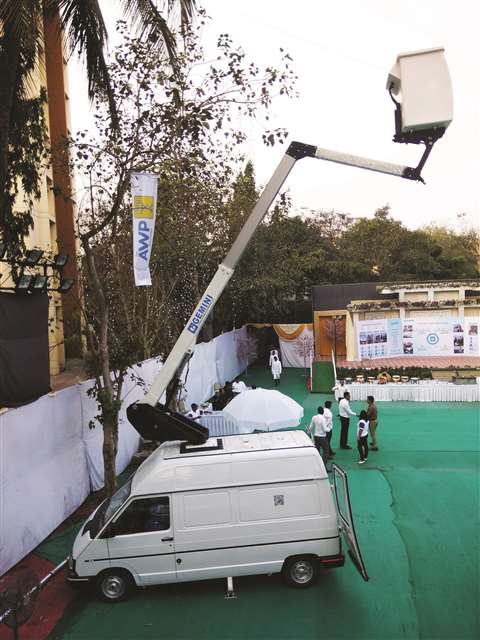 “They are very flexible when it comes to manufacturing and have a great range of products, so there was no need to immediately go with an ‘India’ specific model. Sethi continues, “They are slightly modified and stripped down versions of their [Klubb’s] top end models. The main reason being because we do not require so many safety standards and norms in India. And instead of automatic controls, manual controls are still being used here.

“So, for us, it is also a challenge of the right balance of existing versus new technology and methodologies we want to introduce into the market. It has to be done strategically and carefully.”

As is typical with a van mount, the equipment solves the problem of using two vehicles for one job, with the van serving as a 3-in-1 utility vehicle for storage, maintenance and workshop inside the vehicle. Sethi says, “Another advantage is that can be used throughout the year, especially during periods of heavy monsoon or snowfall, where it can protect all the contents that it is carrying.”

The van chassis is a Tata Winger. Tata is the biggest chassis manufacturer in India and the Winger is typically used as a small school bus, ambulance or mini-refrigerator unit. The GVW is 2.8 tonne for the van mount. In the future that will be brought down to about 1.8 tonnes.

On the other hand, the truck mount, using Klubb’s 13m working height platform, is based on a 3.5 tonne GVW chassis and is also designed to be lighter and compact, compared to traditional truck mounts used in the market. “The chassis size reduces, and the width and the fuel reduces, the lane occupancy reduces. So, the TCO is reduced.

Gemini hosted a special event in February at its premises in Chembur, Mumbai to present the new products. The AWP Junction event was the first time people had seen the specially-designed products targeted at street furniture maintenance.

On the subject of the pick-up, the equipment used at the event was a 13m working height CTE Zed 13 platform supplied for a specific customer in India. Going forward the pick-up mounted platforms will also be those produced by Klubb. The plan is that products under 15m will be Klubb-supplied platforms, while models over that working height will use CTE lifts.

As we have learned Gemini is a pioneer of the access equipment market in India, having started in self propelled boom sales. “We sold more than 500 machines over a span of seven or eight years. When we say 500 machines, in India that is a very big deal.” 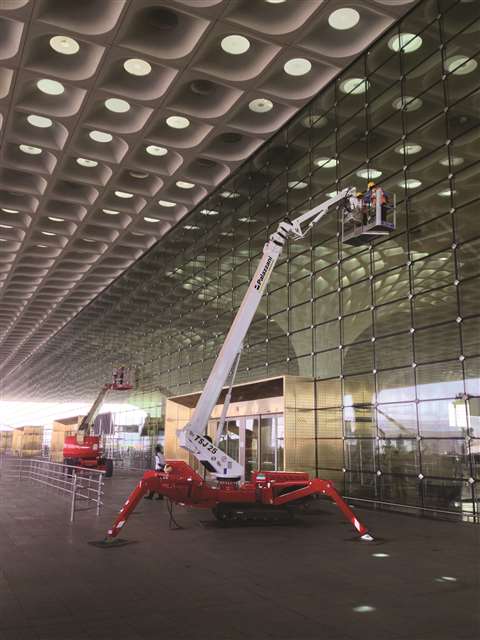 Sethi believes the number of new self propelled machines sold last year in India was around 280 units. This year, the figure will rise to the region of 300-320 machines. In today’s market, 70% of those machines will go to end users and 30% to rental companies. “If you want to add used machines into this equation, it would be a cumulative market of about 600 units. But it’s hard to account for used machine because they come in all shapes, sizes and forms and some date back to more than 10 years old.”

Gemini’s deal with Haulotte in India excludes sales to rental companies as the French manufacturer deals directly with those. “Our focus is with government companies - maintaining the power grid, private industrial outdoor and indoor settings and railway yards.”

In most markets scissors and boom sales amount to a high percentage of the market, particularly scissors of course. “In India the self propelled represents a majority too, maybe 80%. At one point it was 100% self propelled.”

Sethi adds, “Then, when rental companies started in the market, there was a price war. So, people are always looking for the next best thing. That’s when truck mounted applications became important. So now truck mounted is where self propelled was a few years ago. The dynamics are changing.”

Sethi believes vehicle mount sales have the potential to overtake self propelled sales in India in the near term, thanks to the fact their potential is just being realised. Whether or not the ratio of self propelled unit sales will fall quite so far, it’s a fair example of how an emerging access market can lurch from one dominant product type to another, before eventually settling into the type of industry we see in mature markets.

As with other emerging markets, the introduction of MEWP standards will be one of the key factors behind the market tipping into exponential growth. At present there are no such laws or official guidelines. However, there is an organisation specifically for aerial platforms - the Aerial Platform Association of India (APAOI). It’s formed by a group of nearly 50 companies, mainly rental, and is focused primarily on forming legislation in the country.

As a member of APAOI Gemini is keen for the market to adopt a recognised standard. “It’s been in the works for about a year and a half, perhaps we will see something in the next couple of years. A lot of the big contractors have an awareness and are already insisting on more advanced work practices on their sites, and they are starting to insist on only new equipment on site.” 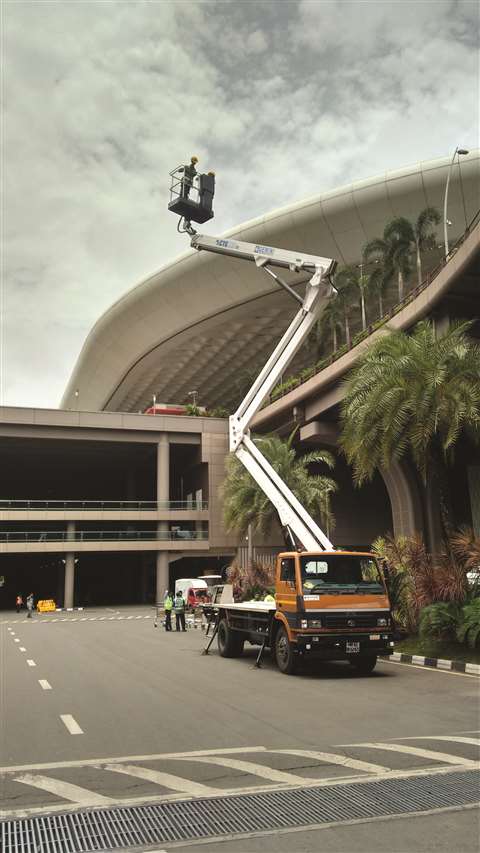 APAOI has employed a MEWP expert from the mature market Singapore to draft a complete working at height safety legislation, specifically for the Indian standard. Apart from a move towards legislation, the idea of safe working at height is slowly gaining ground. “People like us are helping to promote it. Every company or organisation that rents or sells machines passes on that safety knowledge.

The seriousness of the organisation is demonstrated by its members including the 15 biggest MEWP rental companies in India. “In the main they are all second generation companies too, that in the first generation sold cranes with their own association, the CAOI, and its own legislation. Now it has moved on to aerial platforms,” explains Sethi.

Sethi calculates that the biggest 50 rental companies in India have anywhere between 100-plus units in their fleets, down to two or three units. Although the average is probably nearer to 50 machines. How many AWPs do the top 50 rental companies have?

“I think the market will grow five- to 10-fold in the next five years. The number of projects in India are increasing,” Sethi adds, “All the projects that were done manually are now being done through mechanisation. All the new power plants, factories, etc. will be done using machines.”