Hydraulic gantries may not share the glamour associated with tower cranes or high capacity all terrains, but they are not there to look good. They have a job to do, lifting loads as efficiently as possible that are often in places other crane types are unable to access.

Gábor Tóth, operational leader at Megakran, said, “In most cases we are able to use a mobile crane for press moves. For some moves, however, the route through the factory can be very narrow and so we deploy the Enerpac SL400N for the lift.

“In addition to a safe and quick move, using the gantry means the customer does not have to disrupt production to allow mobile crane access.”

Megakran used the gantry’s SL400N side shift units for positioning the press, allowing them to customise the ‘below the hook’ distance to suit header beam dimensions and project requirements.

Controls for the electric side shift are integrated within the gantry base units and wireless control system used to operate the gantry.

By using a narrow track gauge, the gantry can be easily moved around obstacles during industrial moves. As well as spending less time either navigating obstacles or moving them, lifting companies need fewer resources to mobilise and demobilise the equipment.

Tunnelling is another area in which gantries often excel. In the English capital of London a pair of Teichmann gantry cranes have been installed in New Cross to work on electricity company National Grid’s London Power Tunnels (LPT) project.

This involves the construction of 32km of new power tunnels 30m underground to supply London with a more reliable electricity infrastructure using high voltage electricity cables. Two more Teichmann gantry cranes will be assembled in the next few months.

Bridging the gap when cranes are not feasible
From underground to overground, in the USA contractors rented a MJ50HD Travelift from Mi-Jack Products to redeck the US-69 bridge, which is suspended above a damn in Eufaula, Oklahoma.

Construction on the damn was required to hold the rails. There was nowhere to lay out the horseshoes and side beams, so three cranes had to be leveraged for erection.

The lugs were relocated on the side beams and top beams based on the MJ50HD’s centre of gravity to keep the side beam rail wheels plum when suspended from the two cranes, and the top beam was hoisted with one crane at the same time.

The MJ50HD has a capacity of 100,000 tonnes, an inside clear width of 40 feet, a hook height of 28ft 10in. and a wheelbase of 30 feet. An auxiliary hoist option allowed decking to be picked vertical and rotated flat. Biodegradable hydraulic oil was used to ensure both high performance and environmental friendliness. 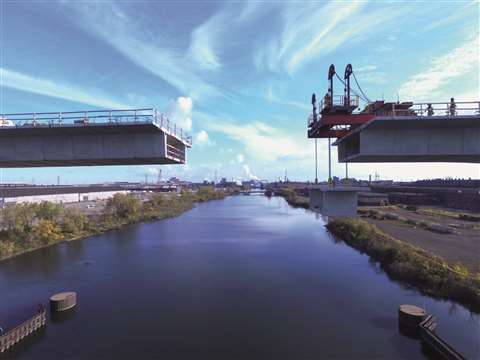 Another bridge job in the United States, carried out by the Arkansas-based company Engineered Rigging, utilised four strand jacks that the company commented allowed for a compact footprint and precise synchronous control of each bridge segment.

The strand jack system, which Engineered Rigging calls the Cantilever Segmental Bridge Lift, is designed to provide a safe, economical, and efficient way to lift and hold concrete bridge segments in place over water when a crane is not feasible.

The system cantilevers off the last segment of the bridge that was constructed over land. Once the new segment is in place over the waterway, the Cantilever Segmental Bridge Lift is then relocated to the newly-installed bridge section so that the next concrete bridge span can be lifted into position.

So we see that on land, underground, and even suspended in the air, gantries and strand jack technology can prove to be refreshingly effective alternative rigging systems.

Enerpac has launched the ML40 Mini-Lift Hydraulic Gantry. With a load capacity of 40 tonnes it has been designed to provide a flexible alternative option for smaller lifts in tight spaces.

According to Enerpac the ML40 keeps operators safe by not having to work in tight spaces. The maximum lift height for the ML40 Mini-Lift Gantry is 5.5m (18 ft). The ML40, with a collapsed height of 1.9m, fits through a standard personnel doorway and can be manoeuvred into position manually.

The ML40 Mini-Lift Gantry includes stroke and travel synchronisation with alarm functions, to alert the operator should something become out of set tolerances, as standard. It also comes standard with a wireless pendant control, which keeps the operator away from the load when lifted. The wireless pendant includes a display that provides information such as load, stroke, alarm details, and set-up screens.

The ML40 Mini-Lift Gantry is a complete, self-contained system with everything on-board including the pump, controls and drive system. Additional components such as 750mm width skid tracks, header beams, lifting anchors and other accessories are available.

Pete Crisci, product line director at Enerpac Heavy Lifting Technology, said, “The ML40 Mini Hydraulic Gantry is sold as a complete system with everything needed to perform the work. Simple to set up and use without external hoses to connect, and a single wireless pendant control.”