How these spectacular lifts have raised the size and weights bar

Some spectacular lifts from recent months show the sheer sizes and weights that can now be accommodated. Niamh Marriott reports 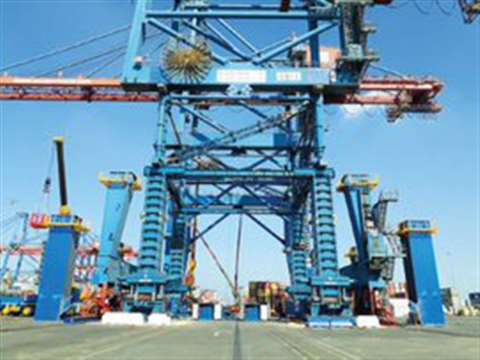 The space industry benefits from heavy lift equipment. In a recent project, Sarens was involved with the transportation, lifting and placement of a launch chamber used by SpinLaunch in New Mexico.

The spaceflight technology development company, working on mass accelerator technology to move payloads to space, commissioned Sarens to work with its team on the engineering and construction tasks required for the installation of the launching chamber, which with 33 metres diameter and more than 1,000 tonnes, is the largest of its kind.

Sarens designed a detailed engineering plan that included all the tasks necessary to lift and tilt the launching chamber at the required angle. The company mobilised a 32-truck operation to transport all the equipment from its facilities in Virginia and Houston to New Mexico. As part of this operation, the Belgian company deployed two 5,800 millimetre SMLT towers, four strand jacks each with a 450 tonne safe working load, two 45 tonne strand jacks, 64 axle lines of K24 self propelled modular transporter and four power pack units.

Once all the necessary equipment was in its final location, the launch chamber was lifted vertically 16 metres, rotated 90 degrees and then transported 200 metres.

Elsewhere in the world, Sarens worked at Port Said in Egypt, on behalf of its client, Chinese crane and equipment manufacturer ZPMC, working to raise six ship to shore cranes. The project involved inserting 11.5 metre extension legs below each crane. To raise them Sarens used its CS5000 jacking system.

Sarens completed a similar job with the CS5000 in Antwerp, Belgium, and was confident in the system’s suitability for this project as well.

Once the equipment was on site, Sarens faced a challenge as the terminal yard was sloped, with no reference points on site for setting up the equipment. The four jacking bases needed to be positioned and aligned perfectly at the same level so that the rest of the structure on top would fit so this was done using a total station.

With everything in place, Sarens jacked up the upper part of each 1,360 tonne STS crane by 12.5 metres so that the client could insert 11.5 metres sections below. In total, there were 15 elements per tower, and each measured one metre high. Because of the weight of the crane, bracings were installed for extra stability during the lift.

The preparation for this heavy lift was unusual as the site is located in a military zone. This meant that ever person needed to be screened four weeks in advance and the sole access to the site was via a ferry.

“Finally, after six months of preparations and some unusual site conditions, we are rewarded with this spectacular view,” says project manager Joris Beevers.

Big Carl: the world’s biggest crane
The world’s biggest crane, nicknamed Big Carl, has been in action again at Hinkley Point C nuclear power station in Somerset, UK. The 5,000 tonne capacity Sarens SGC-250 placed the first steel ring section onto the second reactor building, 11 months after the same operation on the first reactor. The 575 tonne prefabricated ring, which is 47 metres in diameter and 17 metres high, forms part of a reinforced cylinder around the nuclear reactor. This installation was an identical design to the first reactor but the second ring was built 25 per cent faster than the same part on unit one. EDF says this is due to a ‘replication effect’ and will not only benefit the current project but also the identical Sizewell C project in Suffolk. 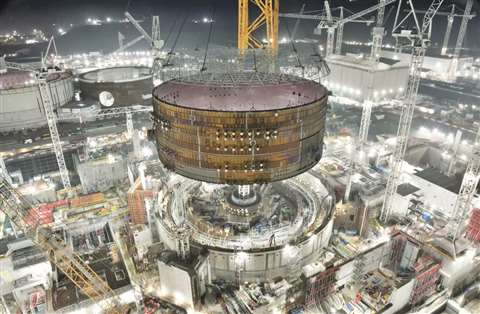 Sarens’ 5,000 tonne capacity crane, Big Carl, has been in action again at Hinkley Point C in the UK

Like the part above weighing nearly 600 tonnes, Kate Lampson from Lampson International in the USA sees a growing trend of heavier components needing heavy lift equipment. “I believe that the need to lift heavier components at power plants, the erection of larger wind towers, the desire for easy assembly and dismantle on site and sleeker designs to fit in smaller footprints, are all increasing the demand for heavy lift equipment and are driving current trends in the heavy lift industry,” Lampson says.

“We are seeing a demand for our Lampson Transi-lift as it has independent track driven crawler transporters which allows the crane to make a lift, while at the same time carrying and setting the load,” Lampson continues. “It has a small footprint, giving it the ability to fit into tighter spaces on job sites. There is also the advantage of the Transi-Lift’s ability to provide much longer reach capabilities due to its capacity at radius.”

“Our second largest capacity crawler crane is our Lampson Transi-Lift LTL-2600. We most recently used this Transi-Lift for construction at a power plant in Georgia where it was used to lift and set a series of components.”

Pete Crisci, product line director of heavy lifting technology and machining products at Enerpac says lifts are getting heavier largely due to prefabrication.

“This trend is more pronounced in certain industries than others. As lifts get heavier, they are becoming more complex and require more specialized lifting equipment,” he says.

Crisci says a vital consideration for heavy lifts is proper ground preparation. “As an example, when using telescopic hydraulic gantries, most time is spend properly setting, aligning and levelling the track to insure proper load distribution.” 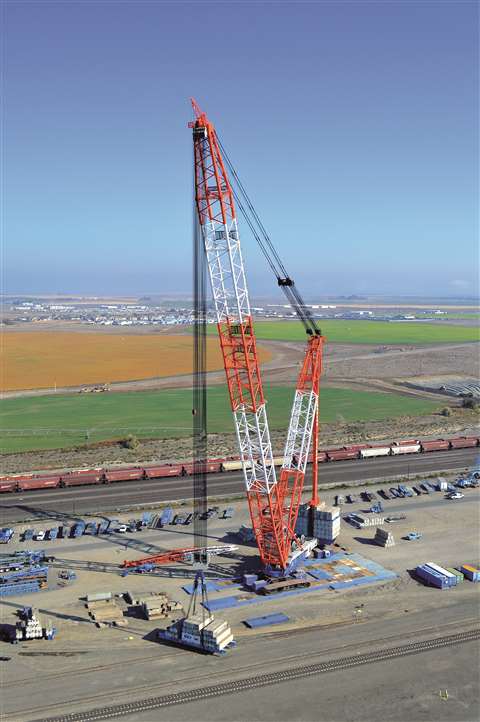 Mammoet recently built a custom-made gantry system for a heavy lift in Vietnam, for Dung Quat Shipyard (DQS). With no readily available lifting system in the market that could lift 1,100 tonnes on a crane barge, DQS approached Mammoet to provide a customised solution for the replacement of a pintle bearing, located at the bottom of the crane.

The custom system comprised four tower gantries, four SJ850 strand jacks, each with 850 tonnes lifting capacity. High precision was required so the team used special software to operate and control the strand jacks. When the gantry was fully constructed, it was assembled onto the crane so DQS could replace the pintle bearing.

The project’s first phase involved the load-out of the jacket. Extensive engineering preparations were needed, considering the weight of 12,733 tonnes. Due to its large dimensions, 131 metres x 81.7 metres x 56 metres, Mammoet used a strand jack load-out system. The jacket was built with a launch truss on skid beams, with breakout jacks used to initiate movement of the jacket from its assembly position before strand jacks and winches began the main pulling operation. The barge had external high-capacity submersible ballast pumps synchronised with the barge’s internal pumping system. The internal ballast system was then used for de-ballasting with Mammoet monitoring and controlling ballasting from the barge bridge.

The topside’s 100 metre high vertical flare stack needed to be fitted with its flare tip. Installation of the 2 tonne flare tip was completed using a tailor-made gantry system from Mammoet, while the deck was still onshore.

To be successful, heavy lifts take proper planning and preparation, and often require custom made equipment. With the innovation coming from this sector, the sky really is the limit.