How pick and carry cranes are changing the construction game

These mini movers are mighty, taking all manner of components from A to B, and manoeuvring around all types of sites. With larger lifting capacities than you might expect, these cranes are a massive force to be reckoned with. Niamh Marriott reports.

Pick and carry cranes can lift a variety of heavy materials, and their designs have been adapted to be useful in complicated and awkward environments. 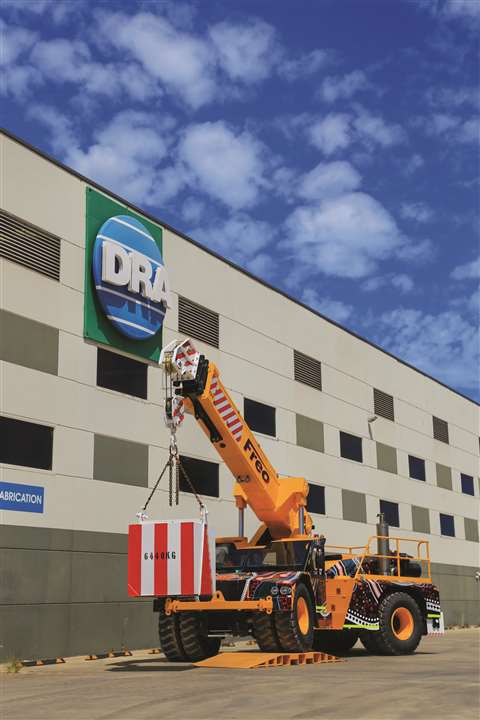 “They are designed to lift, shift and place loads up to 25 tonnes without the need for outriggers,” explains a spokesperson for UK-headquartered GGR Group. “These highly manoeuvrable cranes are a practical alternative to forklifts and come with lifting capacities from two tonnes to 25 tonnes.”

Australia-based DRA Engineering, a subsidiary of DRA Industries, established in 1971, manufactures Humma Cranes – an Australian brand sold in its home country and also exported across Asia. Peter A Dalla Riva, crane and engineering division manager at DRA Engineering, discusses the evolution of pick and carry cranes on the continent.

“Australia developed the pick and carry starting in 1950 with a tractor crane referred to as a yard crane. In the 1980s it evolved as a high road-speed pick and carry,” he says. “Humma’s entry into the market was with a range of models with low servicing costs, a high level of safety with the highest lifting capacity in its class.”

The company’s most popular model? “The Humma 35T, however, the more the Humma 55T is exposed to the market the more sales share it is starting to acquire,” says Dalla Riva. He says that the company has received strong interest from Europe for the 55T Humma.

“There is also a crane mode for crane operation, where the suspension is deflated and locked rigid to the chassis,” he says. “The Humma 55T has a patented hydraulic dynamic levelling front suspension which will adjust during lifting operations to keep the chassis level. The jib is carried on the rear deck of the crane and can then be installed manually by two people.” 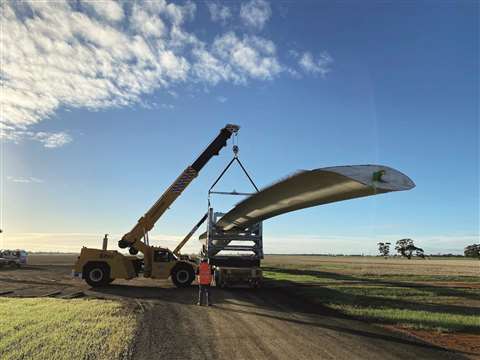 The Humma 55T is proving popular in the wind farm sector as it has an ability to move the turbine blades and place the bases for the towers (Photo: Humma Cranes)

The versatility of this crane type means it can be used on a range of jobs. “There are multiple lifting configurations on each Humma Crane,” adds Dalla Riva. “The most common point is off the hook block [via a winch] which can be reeved for different capacities. Then there is the machinery hook, also called a rhino hook, on the end of the sheave head [boom tip] which allows for lifting in areas of tight roof space where there is not enough room to use the hook block. There are also two sliding hooks mounted under the boom used for low door openings to allow machinery movement. All positions can be used for different situations.”

“Pick and carry cranes are the workhorse of the Australian crane industry,” he says. “Their high road speed allows them to be driven to a site, complete a lift in a short time due to no setup time, then travel off to another job.” 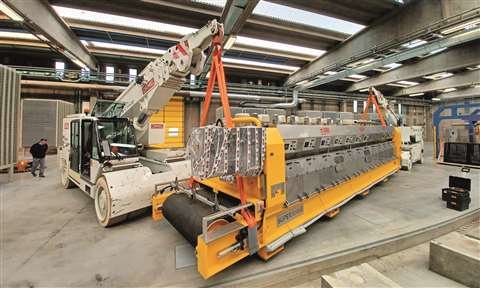 There is a 19.6 metre four-section power boom, a compact boom head, and a boom extension that offsets at 0, 15, and 30 degrees. Maximum sheave height with the boom extension is 27 metres.

“The requirements of the present industrial lifting market covering electric cranes have given Ormig the idea of a new project: special cranes for handling work inside and in limited space conditions,” comments a spokesperson for Italian pick and carry crane manufacturer Ormig. The company is developing a new indoor crane. 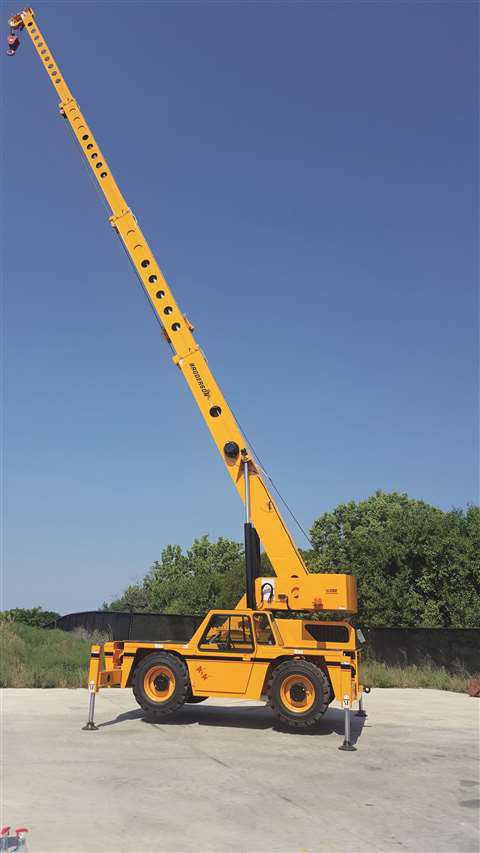 “Ormig can offer lifting capacities from 15 to 100 tonnes with important features such as reduced overall dimensions and weight suitable for the transport on the road without transit permits. A remarkable performance of this type of crane is regarding the very reduced steering radius coming from the possibility of rotating on itself.”

“The maximum stability of the crane is given by four points of wheel contact to the ground, so that safety conditions in working are assured, being a basic aspect of cranes on travel with hooked load.” It features a kinematic mechanism designed to prevent the wheels from skidding and to optimise the accuracy of the steering. Several units have been sold in Europe, where clients are requesting optional attachments such as remote controls for the crane’s motions, the manufacturer says.

“Pick and carry cranes are known for their strength and robustness,” says Carl Cooper, sales and aftersales manager at Hird, a Manitex Valla distributor. “They operate in challenging, busy environments, are designed to be used almost continuously to support many industrial processes. Yet they still have an operational life stretching in some cases into decades.

“Companies looking to replace older cranes, many of them possibly diesel cranes, must consider what the level of usage of diesel-powered machines might be in 10 to 15 years.

“In all other commercial and consumer sectors, thermal power is being replaced with electric power. Costs of using diesel-powered equipment, in terms of emission controls and additional regulation, are increasing rapidly.

“These trends and risks need to be carefully assessed. The answer that comes back is very often clear. The case for switching to electric lifting is undeniable,” he says. There has been a growth in demand for electric cranes and there are new models being developed by Manitex Valla. 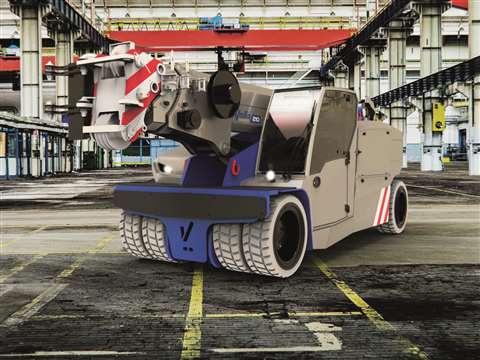 Manitex Valla’s new electric V210R can be controlled via radio remote control or directly from its cabin (Photo: Manitex Valla)

The Valla 220SE is a 22 tonne capacity DC electric slewing crane with blocked and pick and carry duties. It was developed for the aviation industry but is now being considered by companies looking to retire old Iron Fairy and Speed cranes, says the company. It also has a new range of V cranes, including the 3.6 tonne V36R, 5.5 tonne V55R, 8 tonne V80R, 11 tonne V110R and the 20 tonne V210R.

The new 20 tonne capacity battery-electric V210R can be operated via a radio remote control or from its cabin. It is aimed at indoor applications and is designed to be as compact as possible for its capacity.

Maximum lift height is 12.5 metres and horizontal reach is 8.2 metres with 6 tonnes of capacity. It is 1.98 metres wide, 2 metres tall and its turning radius is 4.1 metres. In addition to being able to pass through industrial doors and work in limited space, it can be transported in full working configuration, on most low bed trailers, without disassembling the counterweight.

“The V210R development is the response to precise needs coming from the crane rental professionals asking for a higher capacity machine,” says Carlo Forini, general manager, Manitex Valla. Forini said the idea was to satisfy demand for a larger unit in payload and performance but for the machine to still be compact, easy to use and reliable.

New technologies, including electric power, are at the forefront of the crane industry and these mini but mighty models are benefiting from them. 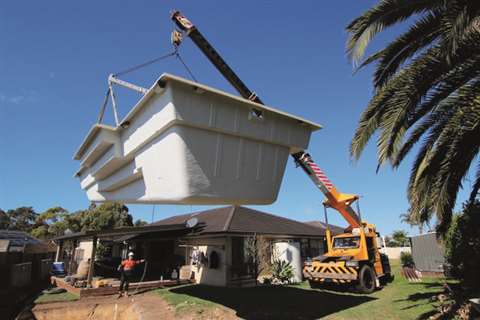 Australia-based A.J. Scarr completed a pool installation with a Terex Franna AT20 (Photo: Terex Franna)
“A.J. Scarr is mainly in the taxi hire business so much of our work involves pools, trusses and we manage a fair amount of tree work with the local arborists. We drop in five to six pools a week for various pool companies. There are some tricky ones amongst them with limited access, but the Franna is perfect for this type of job,” says Glenn McAuliffe, business manager at A.J. Scarr Cranes.

He says, “Franna is a purpose-built machine and a lot of the work we do with a Franna, no other machine will do. To get the best out of a Franna, you need to know how to drive it, and for the guys who have spent time behind the wheel and know what they are doing, they know Frannas are great machines.”

“Our Franna AT20 is 10 years old, and we’ve had it for four years. It’s been an excellent machine with a lifting capacity of 20 tonnes at a 1.4 metre radius and a main boom length of 17.9 metres. Frannas only need 2.7 metres of access for a back yard,” says McAuliffe. “It is always easier to take out some fence panels as opposed to going with a bigger crane and lifting a pool over the home. We use 3 tonne capacity 3 metre endless slings. Then we shackle these on to our spreader bar and hook this on the centre lug and walk the pool around and drop it straight into the hole.”
Pick and mix 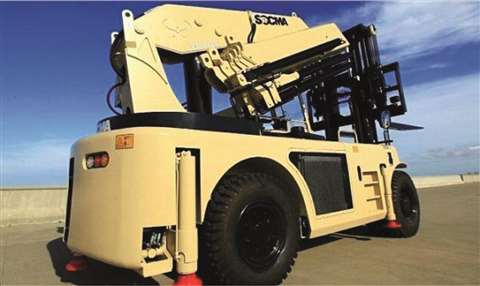 A combined crane forklift from Socma in China - an articulating crane mounted on the rear deck of a large industrial forklift (Photo: Socma)

A different take on the pick and carry theme is this combined crane forklift from Socma in China - an articulating (knuckle boom) crane mounted on the rear deck of a large industrial forklift.

The concept is offered as being two machines in one, and for less than buying two individually. Only one operator is needed and running costs such as fuel are also lower. About eight models are available in the Socma range. New is the HNFC135-720 which lifts 13.5 tonnes on its 72 tonne-metre rated articulating crane which also has continuous slewing with dual motors. The maximum lifting height for that crane is given as 16.5 metres.

Operation of the cranes is via a radio remote and the overall height of the folded crane comes in below the height of the top of the forklift’s mast. They have five hydraulic outriggers for stability when operating as a crane. The manufacturer says it will be launching more new models. 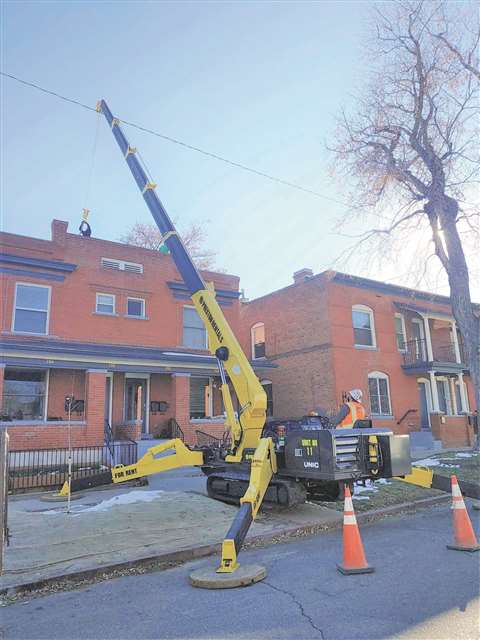 USA-based Preston Rentals America recently worked with Duffy Crane and Hauling in Denver, Colorado, after being consulted to assist with a unique site challenge. The site presented a building surrounded on three sides by power lines and the fourth side was a 3 metre wide alley preventing a safe and simple lift if using a 120 tonne truck crane. Preston Rentals used its Unic 706 SuperCrane to execute the residential HVAC job at a fraction of the cost and time. Rather than closing the entire street and needing to taking appropriate measures to de-energise power lines in the area, the crane went over the curb, onto the front landing and made the lifts without any power line hazards. “This is an excellent example of the versatility, compact nature and performance that the mini crane fleet can deliver,” says a spokesperson.

“Our fleet size continues to grow with the Preston Group now having one of the largest fleets of mini cranes on an international basis. Key to our success has been the development of strong relationships with partners and supporting suppliers and that we offer intelligent smaller crane solutions,” adds David Serg, Preston Group COO. 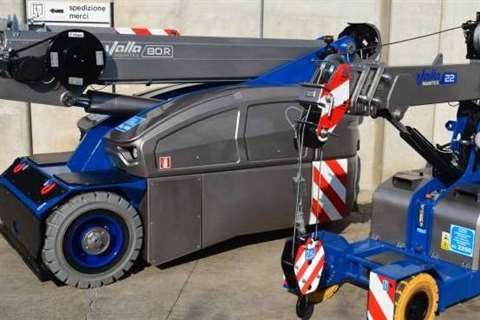