Safety on site is paramount. A key element is the latest hardware and software, some already in use, and some still in development, assisting crane operators to safely do their job. Niamh Marriott reports

Operational feats accomplished in the crane sector are spectacular yet the risks posed by using such heavy and large equipment can be frighteningly severe.

Following and adhering to safety standards helps minimise this risk and, of course, drivers are highly skilled and undergo extensive training to prepare for working on site. Specialist devices and systems, however, can be very useful. On the software side the Internet of Things has given rise to new technology that can provide an even wider safety net. 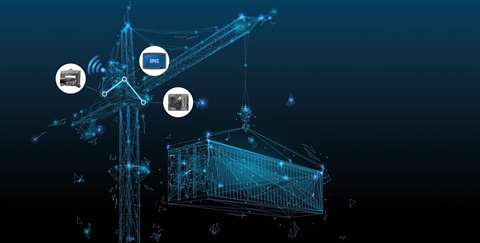 “Cranes and material handling have been one of the leading industry domains adopting the latest technology,” says Kari Ahvenlampi, product portfolio manager at Epec Oy. Finland-based Epec, a manufacturer of machine control systems for crane OEMs, offers programmable Linux-based controllers for central master unit functions. Having only one programmable controller and several CANopen or Ethernet based input-output (I/O) modules placed close to sensors have significant advantages, the company says. “This kind of modular centralised intelligence architecture is coming as a trend especially in the bigger cranes and material handling machines,” comments Ahvenlampi.

Epec Oy
Epec offers 4G/LTE/GNSS/WLAN connectivity as part of its central unit controllers, which makes it easy for customers to implement IoT, edge computing, remote diagnostics or other digitalisation features.

Ahvenlampi continues, “No matter what is the machine architecture the functional safety is key with cranes. These machines typically operate on the areas where there are employees or other people around, making it important for the machine to be safe in operation.”

The system uses cloud-stored data to automatically generate the optimal lifting route, from the material pick up site to the installation position, and will guide the installation position to the sky, reducing the burden on the operator, and increasing the overall safety of the operation. Construction progress can be viewed in real-time on a web browser and the information can be shared with the head office.

AMCS Technologies’ DCS 60 anticollision system
A tower crane safety system already in operation is France-based AMCS Technologies’ DCS 60 anticollision system, being used on a project in Norway where two new buildings are being constructed at Oslo University Hospital. Four Comansa cranes on the site have the technology to help ensure the safety of the machines, their surrounding environment and the people in it. 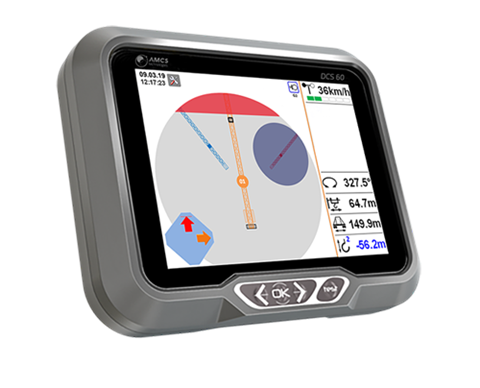 Key functions of the system include a zoning ability to restrict the crane from moving to forbidden zones of the jobsite as well as the anti-collision function which, as it suggests, is designed to stop the crane booms, counter jibs or hoist ropes and hooks from hitting one another. The system operates in real time and in three dimensions to calculate the distances between each crane component as well as the movement speed, to ensure complete immobilisation of the crane at a pre-set distance from a particular obstacle.

There is also a data-logger feature that continuously records and saves data related to events and movements, allowing direct viewing on the screen and-or downloading to a flash drive. Usefully, this universal device is suitable for all types and brands of cranes and will be used on the Oslo site until the completion of the construction of the buildings at the end of 2024.

UK-based Brigade Electronics
Another way to help ensure the safety of people working on site is to use tags attached both to workers and equipment. UK-based Brigade Electronics’ ZoneSafe, a radio frequency identification (RFID) proximity warning system, creates detection zones around vehicles to reduce the risk of injury or damage from collisions and near miss occurrences to people and property.

Designed for use in challenging construction environments, ZoneSafe uses vehicle-mounted antennae to communicate with detection tags, worn by workers, set up in restricted areas or placed on objects. When a tag enters a detection zone, the vehicle operator will automatically receive a visual and audible alert via the in-cab control unit, which will enable them to take the necessary action. Tags worn by workers on foot will also vibrate to warn of an approaching vehicle.

The RFID technology does not require a line-of-sight so tags will be detected regardless of obstructions, blind spots, adverse weather or poor visibility. Each tag can be uniquely identified and linked to individual people.

Safety of crane projects
Precision is key to ensuring the safety of a crane project and devices are being developed to use technology to this end. A new system, the Vita Load Pilot from Colorado, USA-based Vita Inclinata has been designed to precisely place crane loads. Even in high winds, the system is designed to automatically adjust and keep the load stable.

The first system was shipped earlier in 2021 to Holt Crane and Equipment, who have agreed to be the first distributor in Vita’s national reseller network in the USA. 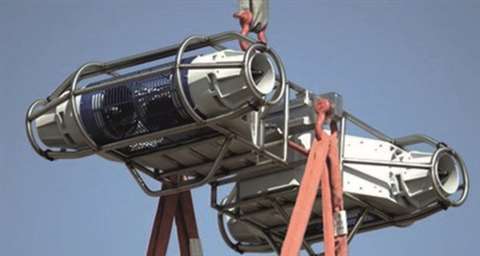 “Safety is where we see the biggest advantage – distancing someone from the load and allowing someone to set the load without the use of a tagline,” says David Worsham, general manager at Holt. “Everyone in the construction industry is becoming more aware of safety in their organisation.”

It is important to not be afraid of new tech but to embrace it, Worsham comments. “The industry generally has been slow to adopt technology, especially with the worry that it could take jobs. But having seen Vita’s system in action, we’re excited to help get it out there. We’re confident that it will make jobs easier and safer instead of eliminating them,” he says.

Tadano’s Flex Base
Confined spaces can cause difficulties when working with cranes. A solution is Japan-based Tadano’s stepless variable outrigger system Flex Base, now a feature on its Demag AC 130-5 all terrain crane. This system is ideal for confined spaces such as construction sites or congested urban areas. It calculates crane capacity based on each outrigger’s extension point, rather than a fixed position. The AC 130-5 is added to the growing list of Tadano all terrain cranes offering Flex Base, which include the AC 45 City, AC 55-3, AC 60-3 and the recently introduced AC 4.080-1 models. 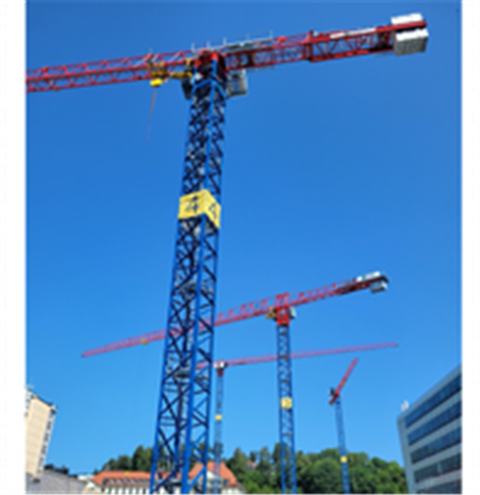 Stepless outrigger positioning works in conjunction with Tadano’s IC-1 Plus control system. Containing all the lift charts for every crane configuration of the AC 130-5, IC-1 Plus determines lift capacity in real-time, based on outrigger setup, counterweight, superstructure angle, main boom length and telescoping sequence. With Flex Base, crane capacities are no longer calculated from fixed outrigger positions and 360 degree load charts which means it can deliver the maximum possible lift capacities in any outrigger configuration, even asymmetrical.

Flex Base and IC-1 Plus allow cranes to carry out more lifts from positions that are otherwise unreachable, expanding the range of potential applications. To further increase on-site lifting efficiency and safety, the online IC-1 Lift Plan tool offers lift preplanning, so owners can determine the crane’s exact position and configuration required to perform the lift. 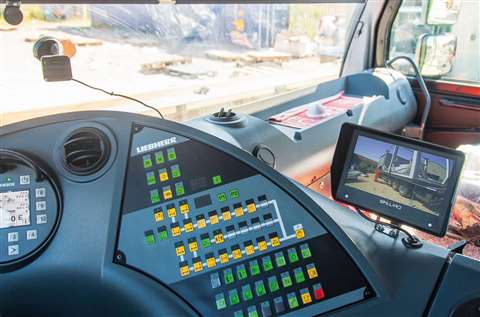 “As you can imagine, driving these large vehicles is a skill in itself but, traditionally the operator will have little additional technology to rely on to give it maximum visibility from the cab,” says Adrian Baggott, operations manager at ABA Crane Hire.

The new system has been operational for just over four months and the real-time access to the data was particularly useful when an issue on-site, some damage to the floor of a project, was discovered.

Though the company stresses its main concern is keeping workers safe, Baggott adds, “One benefit we didn’t expect was being able to use the cameras to get a project update if a client wants a real-time progress report.” 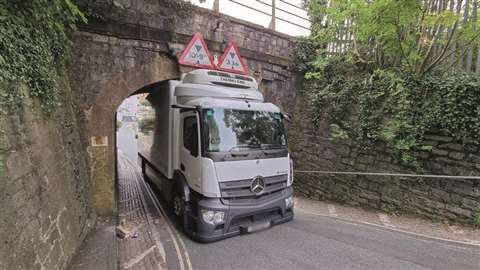 Safety should be a consideration before you even get on site. Transporting large construction equipment like cranes is no mean feat, and roads are not always built to withstand their weight or vast proportions. A proper plan is needed to move kit to the project site and there are new devices that can help along the route and detect potential obstacles. Advance warning systems were brought into sharp focus in the UK earlier in 2021 when a large refrigeration lorry struck a bridge in Plymouth, damaging the stonework and raising the level of the bridge. The incident halted all trains in and out of Cornwall during a busy public holiday as the HGV became wedged under the bridge arch and took more than 24 hours to remove. This is not an uncommon occurrence in the UK, where five bridges a day are hit by oversized vehicles, around 2,000 a year. Collisions cause delays on roads and railways, and in the worst cases injuries and fatalities, and it is certainly something to be considered when transporting large construction equipment. Manchester, UK-based VPS offers an over-height vehicle detection system which actively monitors traffic on routes where overhead obstructions pose a strike risk. It combines electronic sensors, variable message signs and alarm systems to warn over-height vehicles in advance of reaching a low bridge. The company said no bridge strikes have ever occurred with the system in operation.
Global Safety & training Cranes Crane & Specialized Transport

Crane technology update
Some of the latest digital and remote monitoring tools available to crane users, as well as some new gantry crane technology