With demand for top end heavy lift services and equipment increasing, multiple players are looking for a slice of the action. Large industrial structures, for both onshore and offshore applications, are increasingly being pre-assembled, creating greater demand for heavy lift machines and innovative lifting techniques.

Responding to this demand, in November 2020 Belgian heavy lift multinational Sarens announced a new 100,000 tonne-metre super heavy lift ring mounted electric crane, the SGC-90 (see page 22 for our interview with Matthias Sarens, the man behind the SGC-90 project). The crane can have a load up to 1,650 tonnes on the hook and target applications include the nuclear, logistics, construction, and offshore wind sectors. The crane is fully assembled and has been undergoing testing at the port in Ghent, Belgium. It is already booked in for its first project to start around the turn of the year. 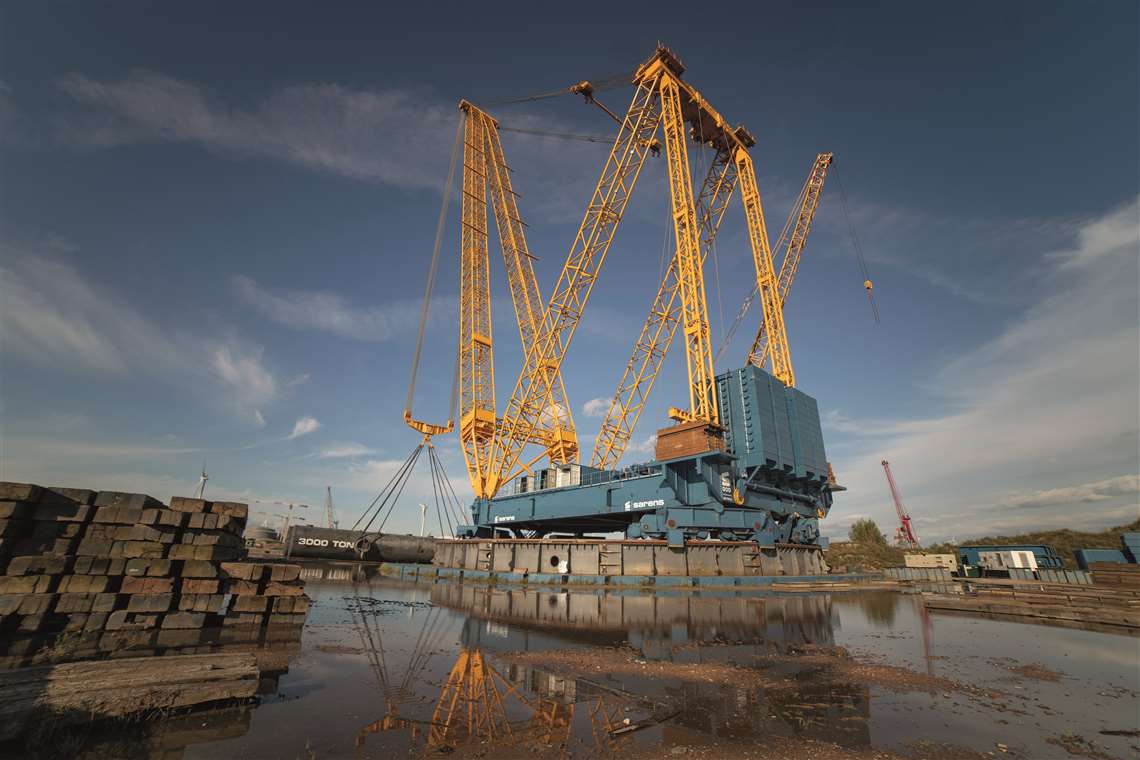 Also in November 2020, international heavy lift and transport specialist Mammoet announced it is developing a 6,000 tonne capacity super heavy lift crane (see News p7). It will have the nomenclature SK6,000 and Mammoet says it will typically be used to lift modules for the construction of floating production storage and offloading (FPSO) projects in bigger blocks. 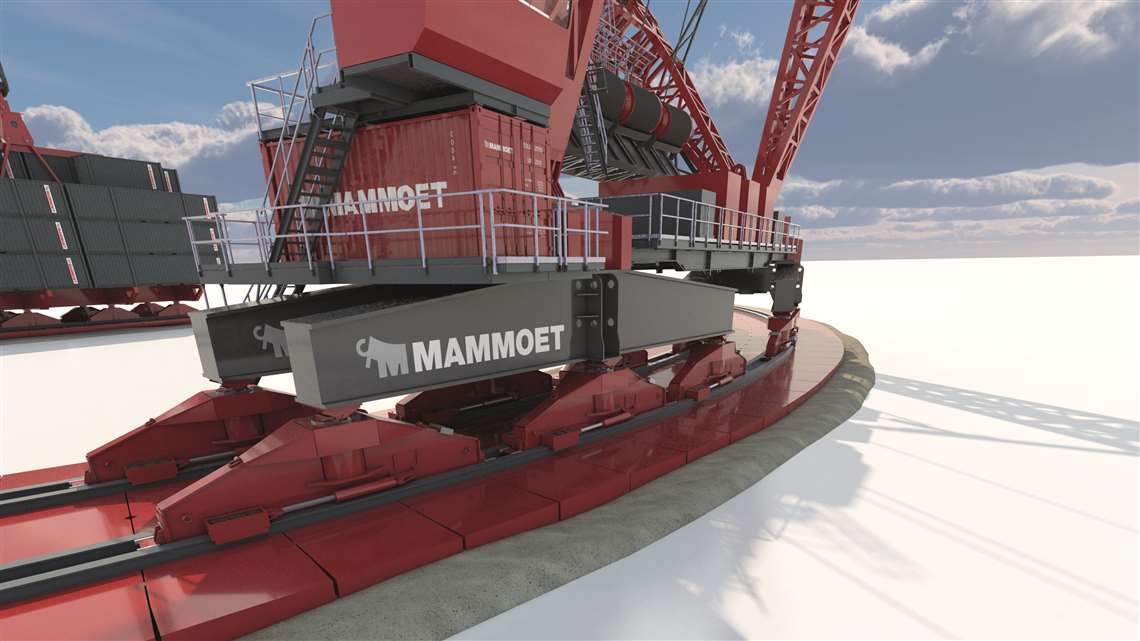 “With the innovation of the SK6,000 crane, our customers can think bigger than ever before, pushing modules beyond the 4,000 tonne and even 5,000 tonne barriers,” claims Mammoet sales director Giovanni Alders. “Its low ground bearing capacity also means the crane can be used all over the world… As FPSO designs scale-up not only are module designs growing larger and heavier but flare towers are also becoming taller than ever before. With our SK6,000, we can install flare towers of up to 1,500 tonnes and 150 metres in height in a single piece.”

The SK6,000 follows the 10,000 tonne capacity SK10,000 which Mammoet announced in 2019. Mammoet claims the SK10,000 is the world’s largest capacity land-based crane and it is designed to install large modules directly onto ship’s hulls. It has a central ballast design meaning that the crane only requires a section of ring or crane track when operating. This, Mammoet says, reduces the size of the lifting area required by up to 45 percent.

In September 2020 Mammoet also launched the 2,500 tonne class Focus 30 heavy lift crawler crane. It’s designed to make big lifts but with minimal installation requirements, set up space, and laydown (see full details on this crane in our Product News Special in the October 2020 issue of ICST). As a 2,500 tonne class crane the Focus 30 can be used for a wide range of lifts. Its maximum load moment rating is 30,000 tonne-metres and many lifts can be completed from one position.

German-Swiss construction machinery multinational Liebherr says it has seen strong demand for its 800 tonne capacity crawler cranes. It has now delivered more than ten of them across Europe, North America and Asia. All are suitable for a range of heavy-lift applications and come with the standard 650 tonne S head section for hard hoisting work in industry and wind turbine erection jobs.

The company has now developed and tested an 800 tonne head, so that the crane can make the most of its 800 tonnes capacity at 9 metres radius on a 57 metre boom.

Liebherr also reports demand for its heavy lift cranes from the port and offshore sectors. It is developing a 3,000 tonne capacity offshore wind farm erection crane, the Liebherr Heavy Lift Crane (HLC) 150000-3000, for use on offshore wind foundation installation vessel Alfa Lift. Designed by Norwegian shipbuilder Ulstein, Alfa Lift is being built in China and is due for delivery in 2021. Liebherr says it will be the world’s largest vessel of its type. 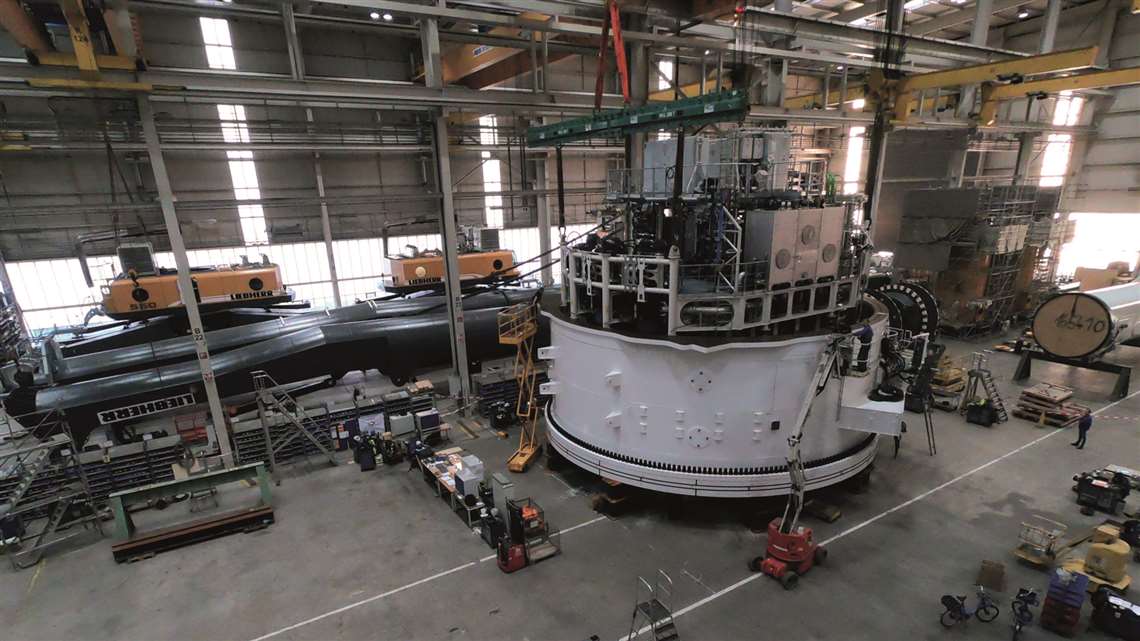 A landmark moment: the lower slewing unit of the Liebherr HLC 150000-3000 is now complete

In October 2020 Liebherr reached a landmark with the construction of the double lattice boom HLC 150000-3000 at its Rostock, north Germany factory. It mechanically connected the crane’s lower slewing column and the machinery frame to create the lower slewing unit of the HLC.

The HLC 150000-3000 will be able to lift its 3,000 tonne maximum to a 30 metre radius or 1,000 tonnes at an outreach of 76 metres. With the two major sections of the crane now “married” it is ready for the next stages of assembly. Liebherr’s customer for this crane is Norwegian specialist contractor OHT.

Remaining in Rostock, Liebbherr has now made its TCC 78000, the 1,600 tonne capacity rail mounted heavy lift gantry crane that it used for its own loading and unloading of ships, available to external customers.

The crane’s first job, completed in September 2020, was to load 72 foundation piles for Denmark’s largest wind farm. Working for EEW Special Pipe Constructions GmbH in co-operation with turbine manufacturer Vattenfall, the TCC 78000 lifted the monopiles from the quayside onto a ship. 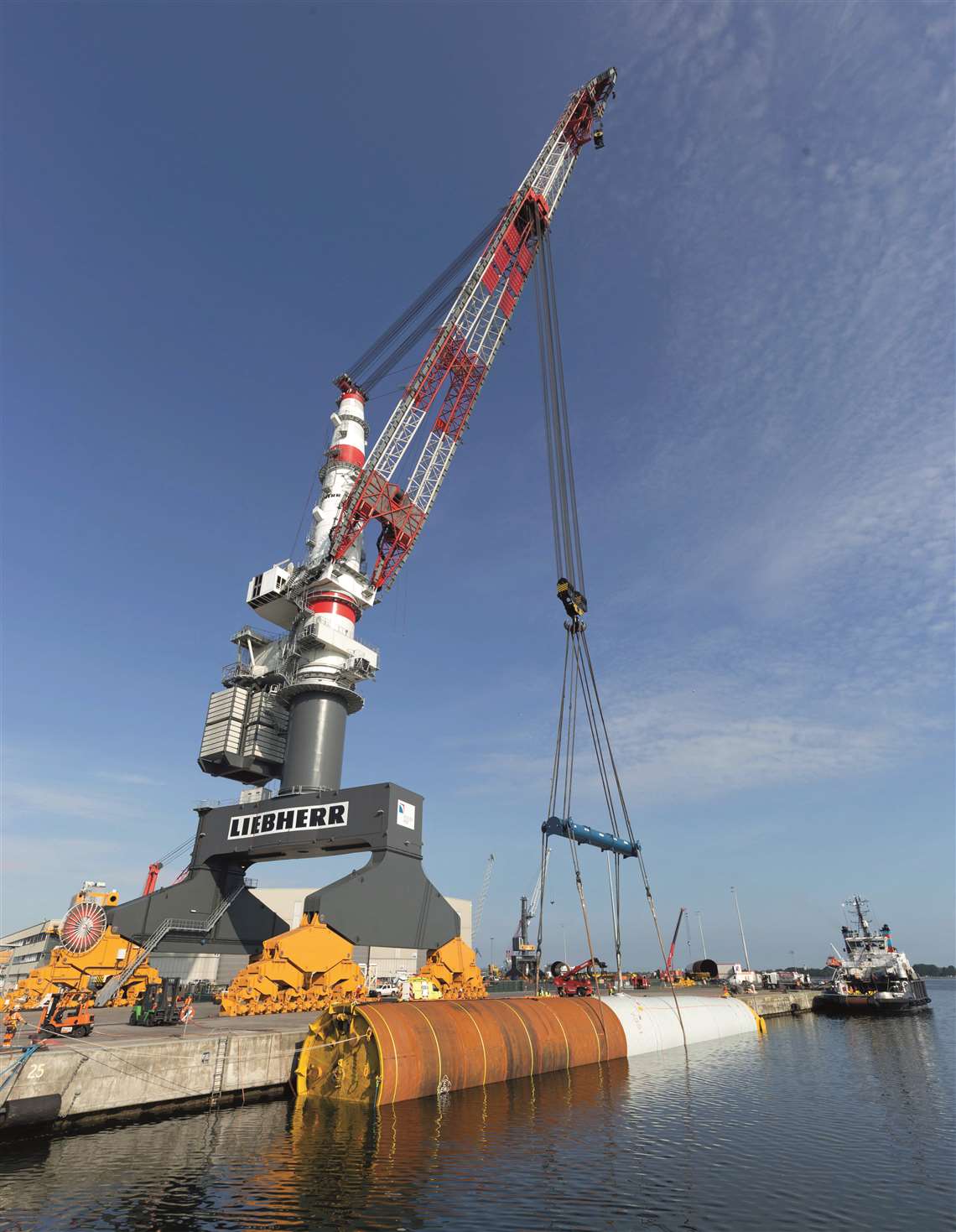 Completed Friday 28 August, the operation took approximately two hours, from connecting the vessel’s lifting beams to the platform to the lift. The actual ‘fast lift’ of the topsides took only seven seconds, Allseas says. Pioneering Spirit will now deliver the topsides to the Peterson-Veolia yard in Dales Voe, Shetland, for disposal.

Prior to this, Pioneering Spirit completed the removal of over 27,000 tonnes of platform facilities over a two-week period as part of the Tyra Redevelopment Project for oil and gas exploration and production company Total E&P Denmark.

Platform preparation was carried out by Mammoet’s Conbit operation.

An alternative to using heavy lift cranes for heavy lifts is the use of jack-up systems. According to jack-up equipment manufacturer Enerpac, their use has transformed the way many heavy lift projects are executed.

Enerpac’s JS-Series jack-up system comprises a synchronised lifting and lowering system with self-contained hydraulics in each unit. Loads are lifted in increments as steel boxes, called barrels, are stacked together to form lifting towers to mechanically hold the load.

In the UK, logistics and heavy lift specialist Osprey Group used four Enerpac JS-250 jack-up systems to install a bridge deck weighing 1,400 tonnes. The bridge was 74 metres long and 16 metres wide and was replacing an old one over a dual carriageway. Using the JS-250 allowed the bridge deck to be built next to the highway and then transported 500 metres on self propelled modular transporter (SPMT) to the installation site. 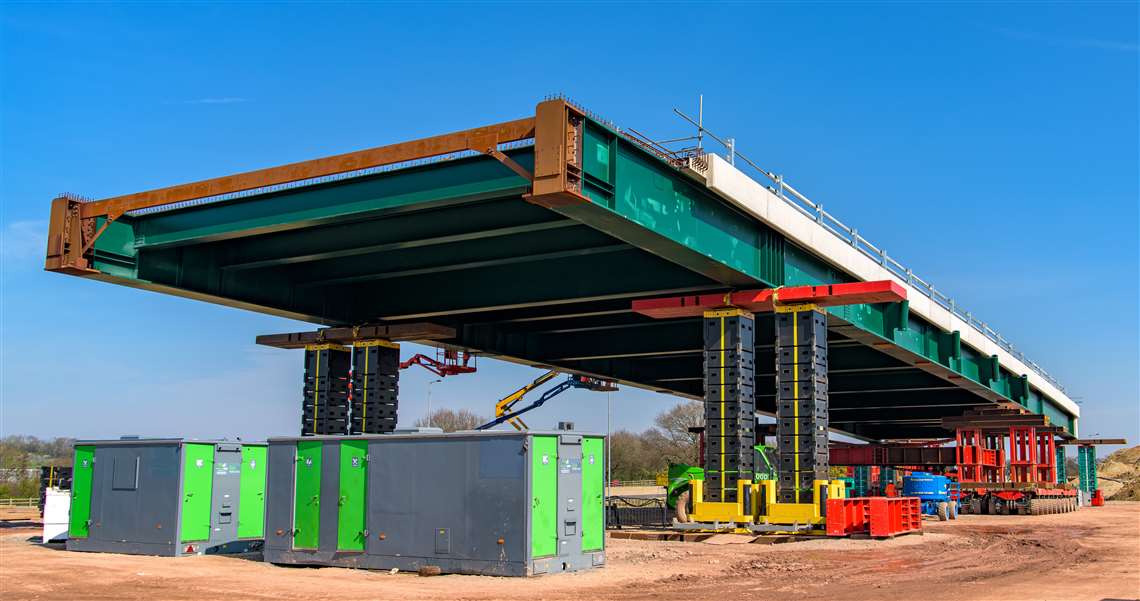 The jack-up systems were also able to compensate for a 1.5 metre inclined height difference at either end of the bridge deck. The jack-up units were delivered to the deck construction site by flat-bed trucks, which meant no need for specialist transport.

“Enerpac JS-250 jack-up units are easy to deploy and operate,” said Ryan Ebanks, project engineer, Osprey Group. “Given the size of the bridge deck in this instance, and the need to incline it by 1.5 metres, the Enerpac jack-up was a perfect choice. Without them, we might have had to use multiple cranes.”

It seems that the economies of scale created by supersizing industrial structures such as topsides, bridges, foundation piles and FPSO will continue to play an important role in the ever-evolving heavy lift sector.

(726 tonnes) at a 260 foot (79 metre) radius. The lift was performed while maintaining a ground bearing pressure under 2,000 PSF and no piling or elaborate foundation was required. 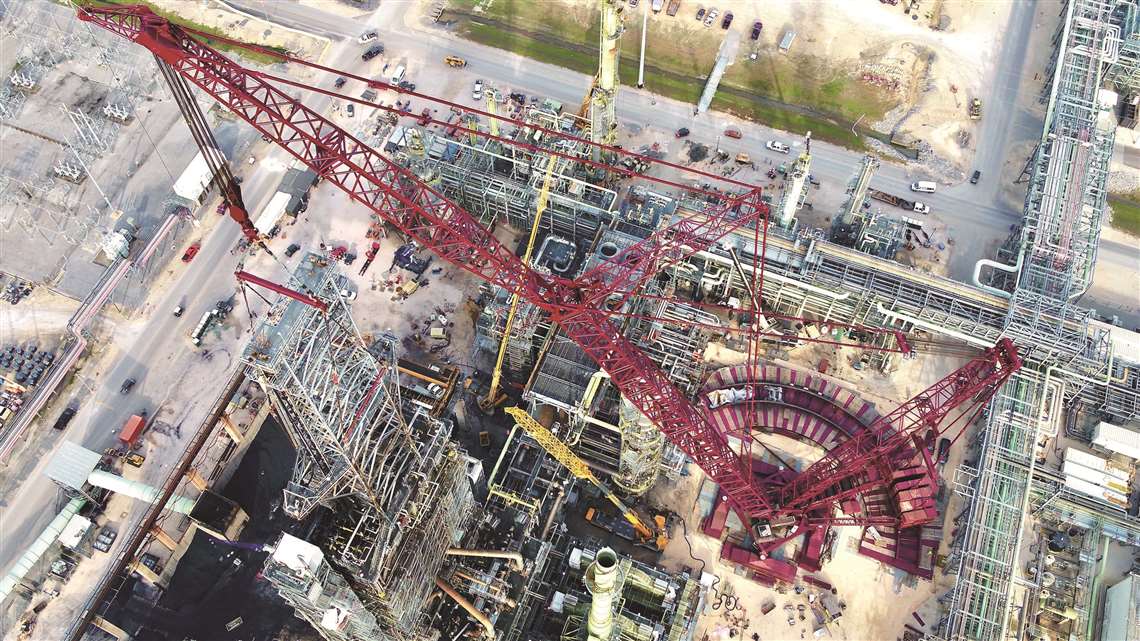 After two years on site, Mammoet has completed the heavy lifting and transport work at the Dangote Petroleum Refinery and Petrochemical complex in Nigeria, Africa.

On site Mammoet used two of its largest super heavy lift ring cranes: a 5,000 tonne PTC 200 DS and a 2,000 tonne PT 50. These allowed more efficient approaches to lifting and installing heavy and oversized components, including a 3,000 tonne regenerator, Mammoet said. This was claimed as the heaviest load ever transported over a public road in Africa. Another record for the refinery was a 2,000 tonne crude column, claimed as the largest crude column in the world. 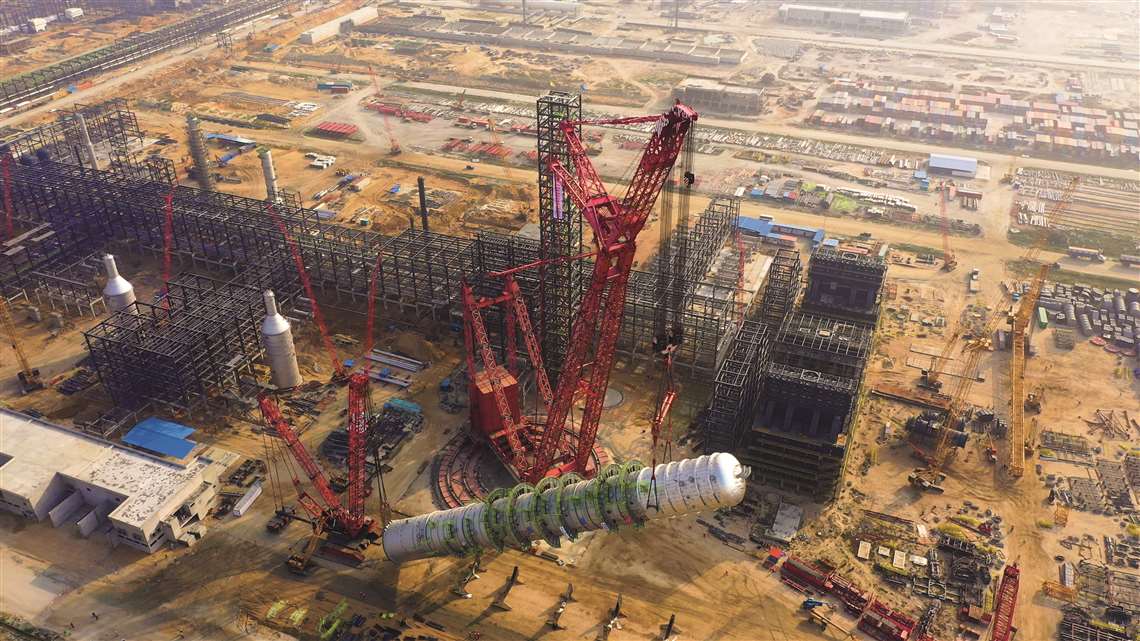 Voltaire is designed to transport, lift and install offshore wind turbines, transition pieces and foundations for current and future developments. It can also be used for work in the oil and gas industry and for decommissioning of offshore structures. Jan De Nul claims it will have better operational limits compared to the existing jack-up installation vessels.

Voltaire has a main twin boom lattice crane with a lifting capacity of more than 3,000 tonnes, supplied by Dutch crane manufacturer Huisman. The vessel has an operating depth of more than 80 metres, a payload of about 14,000 tonnes and accommodation for 110 people. With four legs, Voltaire can lift itself above the sea level for stable working conditions.

According to Augsburg, Germany-based engine manufacturer MAN Energy Solutions, which is supplying six 12V32/44CR main engines for the crane vessel, Les Alizés underscores a global trend within the offshore wind-energy segment for increasingly larger wind turbines. These can be more than 270 metres tall – with blades up to 120 metres long – and can be mounted on foundations weighing up to 2,500 tonnes; dimensions that current offshore installation vessels have trouble installing, it claims. Like the Voltaire, Les Alizés can also be used for oil, gas and decommissioning work. 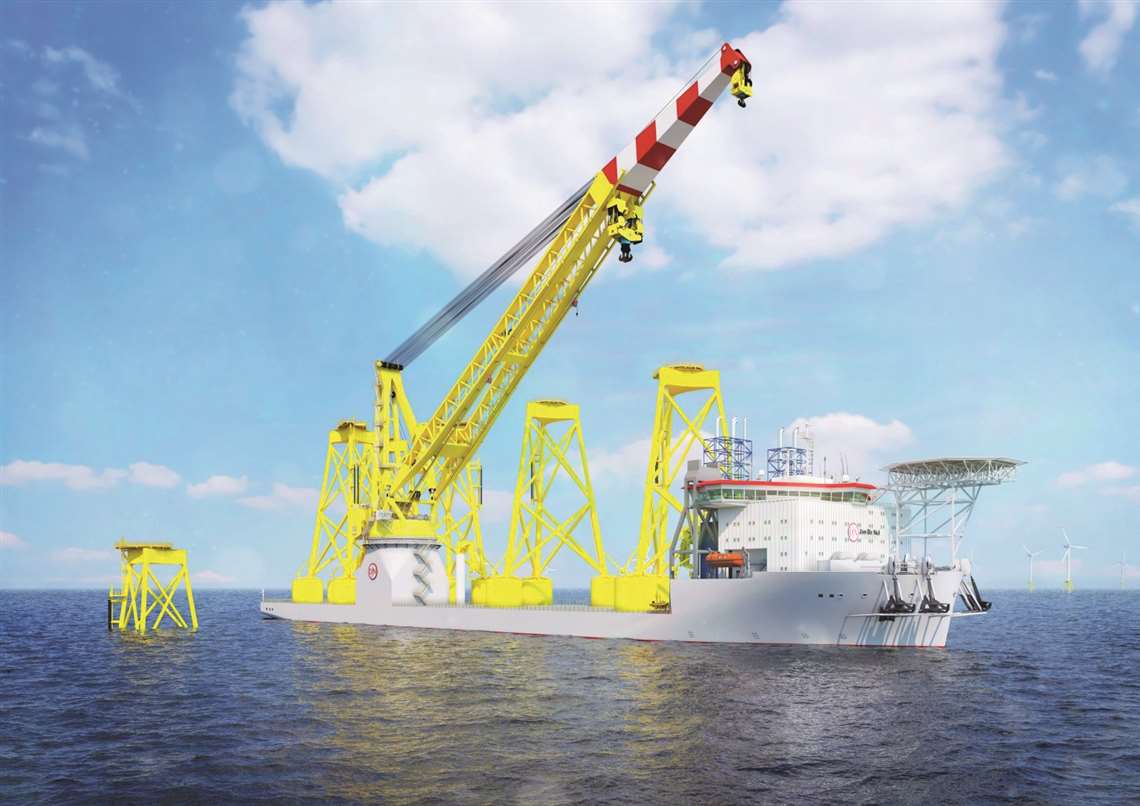