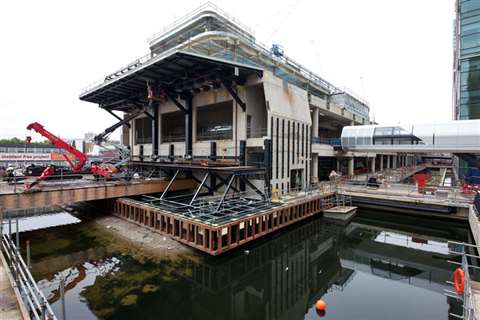 Due to space restrictions, a Unic URW-706 mini spider crane from GGR Group was used to lift the units into position

The Canary Wharf station is located in the North Dock area of West India Quay and forms part of the £15 billion Crossrail project. In total, six louver ventilation units were fitted at the station. The units weighed 1.3 tonnes each and were installed in two parts.

To carry out the lifts, the six tonne capacity crane was set on a temporary platform on the dockland. From here the URW-706 was able to lift the steel frames for the units into position, before the section of the louvers. The sections were lifted at a 54 degree angle and held in position for fixing, a company spokesperson said. It took six days to install all the ventilation units

On a separate job, a Unic URW-706 mini crane was also used at the project to install 200 units of glass onto the upper and lower levels of the station’s 185 metre elevation. More than 1,500 timber beams were also installed by a Unic crane at the site.

Once complete, the six-storey Canary Wharf development will be one of the largest Crossrail Stations. It is scheduled for completion in 2015.