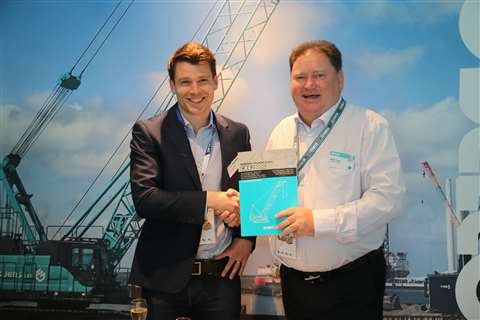 Hawks Crane Hire in the UK has ordered Europe’s first unit of the new 300 tonne capacity Kobelco CKE3000G crawler crane. The Dartford-based company sealed the deal during the Intermat exhibition in Paris, France.

The model was launched in December 2017 and the first two units were delivered to Indonesian contractor Guna Teguh Abadi (GTA) Construction in March.

Commenting on his choice of crane, Elliot Hawkins, Hawks’s managing director, said, “The CKE3000G is a very flexible machine that will not only work well in the pre-cast, modular building sector, currently one of our largest markets, but will also open the door to new opportunities in the UK’s heavy lift marketplace, particularly the energy sector – gas, oil, renewables and energy to waste power plant construction - and on large-scale infrastructure projects, such as HS2 and Hinkley Point C.

“After careful evaluation we chose Kobelco’s CKE3000G because, having compared it to many of its competitor’s models, its duties in standard luffing jib configuration were really impressive. We did some very thorough comparisons with several other competitor’s cranes and it out-performed one by a staggering 35 per cent. It also beat a 350 tonne competitor machine, which is incredible.”

Mark Evans, Kobelco Cranes Europe sales and operations manager (Kobelco Construction Machinery Europe), said, “We are pleased to confirm the first order of the 300 tonne capacity CKE3000G for Europe. This is the first Kobelco crane of this size that has been sold into this all-important market and marks the first step in the next phase of Kobelco Cranes’ expansion of its product line-up for the region. We look forward to officially handing over the CKE3000G to our client, Hawks Crane Hire, at next year’s Bauma in Munich.”