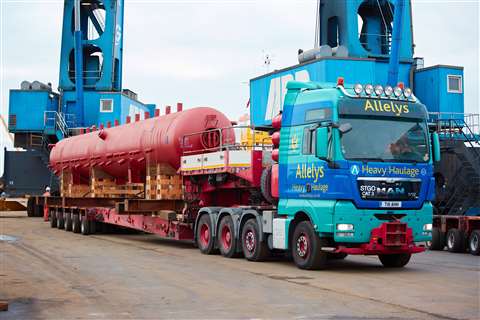 One of the 23 loads moved by Allelys for a new waste to energy plant project in the UK. The largest load, 19.75 metres long and weighing 80 tonnes, was moved on a five axle beam trailer custom-built in-house

UK transport specialist Allelys supported an energy from waste project by offloading 23 items from a vessel, putting them in temporary storage and transporting them to site.

The units, which arrived into Immingham port in the north east of England were stooled off ready for self-loading. All 23 loads, including superheaters and a drum, were received over a two day period using three heavy haulage trucks and modular trailers. The pieces were up to 19.75 metres long and almost all of them were more than 4 metres wide, with the largest being 4.95 metres.

Once the site was ready for the units to be delivered, Allelys was required to transport them in pairs, with a maximum of two deliveries a day because of constraints onsite. The team also had to work to specific time slots for arrival on site in Shepshed, Loughborough, in the English Midlands.

The majority of the units were transported using a seven axle modular trailer with a neck instead of a drawbar. A six axle Goldhofer trailer with a neck was also used. The largest and heaviest piece – the drum – required a custom 5 axle beam trailer to be built in-house, due to it measuring 19.75 metres long and weighing 80 tonnes.

In addition to the transport, Allelys provided all escort services for the project.

“This was an interesting project for the team to work on due to the agility and flexibility it required,” explained Jamie Woodland, assistant transport manager at Allelys. “The vessel berthing date was unstable due to weather conditions, so it was essential to provide our customer with a flexible service to meet the project milestones. Additional equipment, including an extra truck and trailer were also required at short notice. Our extensive equipment fleet at Allelys enabled us to meet these demands to ensure the project was completed successfully.”

Allelys’ substantial involvement in the energy sector includes supplying storage facilities, specialist transport and installation services to transmission and generating companies. It has a large equipment fleet to offer a factory to foundation service. 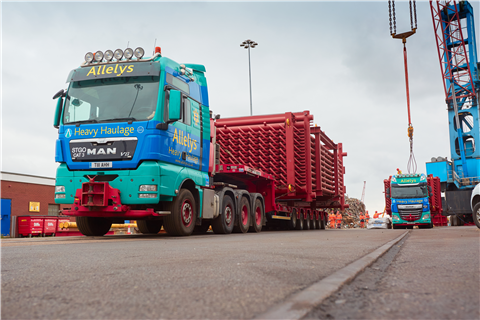 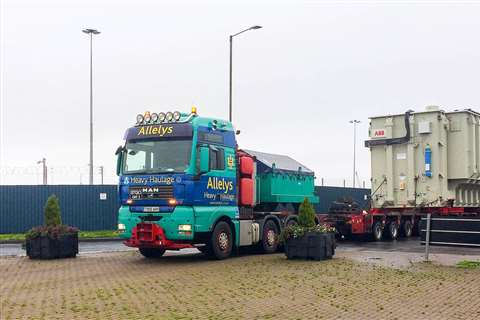