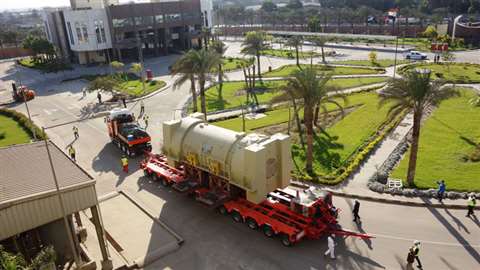 Egyptian Transportation and Logistics (ETAL) moved a 360 tonne transformer at the El-Tebbin power plant in Egypt.

The transformer measured 10.75 metres long, 5.4 metres wide and 4.4 m high and was moved using a 3-file Scheuerle InterCombi PowerBooster transporter. The InterCombi platform trailer has a modular design, which can be coupled both longitudinally and laterally, the manufacturer said. It has a steering angle of 60 degrees and is suitable for transporting heavy loads. The integrated PowerPack is used to deliver additional thrust, saving a second tractor during transport under certain circumstances, the manufacturer added. The InterCombi PowerBooster can be driven as a self-propelled vehicle via remote.

For loading, the stator was jacked up allowing the transporter to be driven underneath it. The load was then lowered onto the transporter and secured on steel bolsters ready for transport. Along the route to the power plant, obstacles such as manholes were covered with steel plates or pipe racks. On arrival at the site, the stator was moved to its final position and skidded into its mount.