Dockside pair up with Steil

Cranes assembling cranes is an every day activity but as cranes get larger the ones used to assemble them need to be bigger too. For this project, Trier, Germany-based Steil was working on behalf of Kranwerke Mannheim. Before the cranes could be assembled, one of the main steel beams for the crane had to be loaded at Speyer Port for transport to Mannheim by ship. 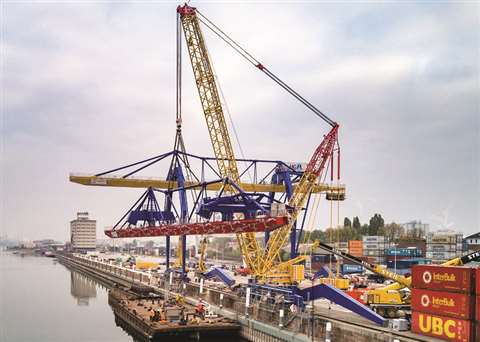 Steil wanted a crane that could do both jobs so it chose a Terex Superlift 3800, now known as a Demag CC 3800-1. Steil has seven of these in its fleet and describes them as indispensible. Sebastian Sehl, Steil project manager, said, “Without this crane, we wouldn’t have been able to take care of these jobs with the kind of flexibility we needed.”

Steil lifted the 78 metre, 105 tonne main girder for manufacturer Tobies onto a pontoon at Speyer Port. Using a crawler crane meant the lift from the truck to the pontoon could be made even at low tide, when the required radius could increase by up to three metres. “That’s why we had a variable Superlift counterweight of 65 to 125 tonnes. That allowed the crane to work flexibly with a radius of 28 to 30 metres,” Sehl explained. With the pontoon loaded it left for Mannheim.

On arrival Steil’s work to erect two container cranes at the shipyard involved a number of components, including the main beam. To begin with, the hinged legs for dockside crane 1 were erected with 130 and 200 tonne capacity assist cranes. At the same time, the Superlift 3800 lifted the fully assembled 241 tonne beam.

It was configured with 54 m of main boom, 50 tonnes of central ballast, 165 tonnes of superstructure counterweight, and a 54 tonne Superlift counterweight. The assembled beam was lifted 30 m and then the crane crawled about 15 m carrying the load. At a radius of 16 to 18 m, the crane then lifted to a height of 32 m and turned the load so that it was parallel to the dockside crane’s hinged legs, Terex said. The legs were then bolted to the rail bogies and to the beam before the two assist cranes were moved so that they could bring the fixed legs in for installation on the bogies. “During all this work, the crane had to hold the heavy crane girder in the required position without the girder swinging back and forth, which definitely was made more difficult by the wind hitting them, but never to the point that it became critical,” Sehl said. After that the 15 tonne trolley was lifted onto the runway girder using a pair of 200 tonne wheeled mobile cranes.