Constructing the world’s largest and tallest observation wheel is no mean feat, especially when you factor in sandstorms, strong offshore winds and scorching temperatures. ICST reports

At the heart of Bluewaters, an island destination in Dubai, United Arab Emirates, the Ain Dubai observation wheel stands more than 250 metres tall. The wheel comprises a wheel rim, rotating hub and fixed spindles mounted on four support legs. The rim is 240 metres in diameter and was assembled from eight segments welded together on site and connected to the hub by cable spokes each longer than a full-size football pitch. 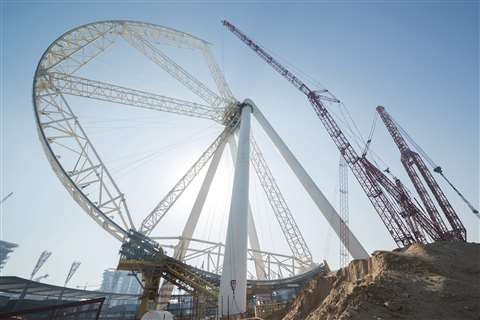 Most of the wheel, both cranes and the Enerpac push-pull system all in one photo is no mean feat when the top of the wheel is more than 250 metres up

The 48 passenger cabins circling the enormous circumference of the wheel have capacity to carry more than 1,750 visitors at a time in total.

To begin this mammoth construction task, the legs and the spindle were prefabricated offsite before being transported by barge to the installation site.

Mammoet in Abu-Dhabi
Each 890 tonne leg was 126 metres long and 6.5 metres in diameter. They were rolled onto Mammoet’s barge using 40 axle lines of SPMT at the fabrication yard in Abu-Dhabi. Once on the barge, the legs were securely floated to the site.

For the installation, Mammoet paired one of the world’s biggest cranes – its PTC 200-DS – a 5,000 tonne ring crane, with a 3,000 tonne crawler crane. Together they ensured the stability and flexibility required to lift each leg and the spindle from the barge into position, while working 137 metres above the ground. Subsequently, Mammoet set a world record by lifting the 1,900 tonne spindle to sit on top of the four legs: it was the heaviest and highest tandem lift ever undertaken worldwide.

3,000 tonne crawler
Following the positioning of the legs and the spindle, Mammoet lifted eight rim pieces and temporary spokes. The 3,000 tonne crawler crane was the only crane capable of carrying out these lifts. Its high capacity combined with its long lift radius could meet the distance between the barge and the installation point and lift each 700 tonne section in one motion, without the need to set them down or reconfigure the crane. 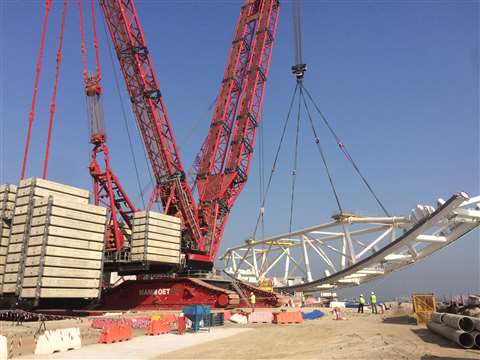 Enerpac proposed to use a push-pull system for the wheel construction. The idea was based on the erection of the ferris wheel they did in Las Vegas.

Positioned at the base of the wheel, a pair of hydraulic grippers pushed the wheel forward, effectively rotating it by 1,500 millimetres at a time. The push grippers were then released and pulled back into position using hydraulic cylinders. The push-pull operation was then repeated. This technology was based on the strand jack type Enerpac skidding systems.

The Push-Pull system was aligned to the wheel rim using steel wheels. The wheel rim is held and moved by the Push-Pull system’s two gripper modules in a support frame positioned on either side of the wheel rim at the base of the wheel, similar to the arrangement for a bicycle wheel’s brake blocks. Each module consists of four interconnected elements: dynamic gripper box, push-pull cylinders, a static gripper box and static balance cylinders attached to the push-pull tower.

Given the high loads and limitations on the size of the push-pull unit, Enerpac decided to boost the gripping power of the gripper boxes. The force of the hydraulic cylinders on the wheel rim was supplemented with the addition of steel teeth pads and 12 spring energised clamp sets. “Enerpac’s service engineers, mechanical engineer and software engineer did the erection of the wheel on site,” said the spokesperson, who added that the work was done for the main contractor Hyundai Heavy Industries, who bought the system from Enerpac. 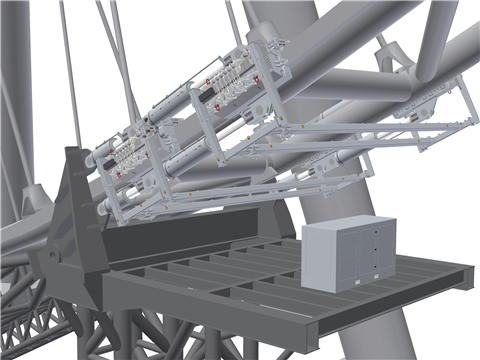 The assembly of the wheel is now complete and it is undergoing trials. A grand opening is scheduled for 21 October 2021.