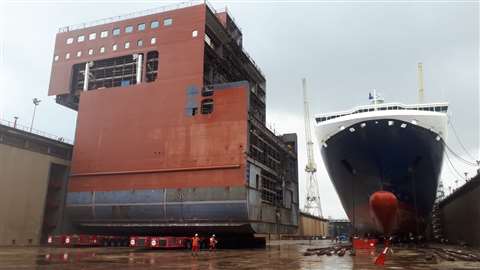 New section to be added to Cruise Roma

An Italian cruise ship has been cut in half and a new mid-section installed in order to increase its length.

Built in 2007 by Fincantieri, the MS Cruise Roma already measured 225 metres in length. However, once the refurbishment works being carried out in Palermo, Italy, are finished, the vessel will be almost 30 metres longer.

Owned and operated by Grimaldi Lines, the Cruise Roma is one of two passenger vessels being upgraded by the original shipbuilder Fincantieri.

Specialist heavy lift company ALE was responsible for transporting the ship’s sections. The new mid-section, which measures just under 30 metres and weighs 2,540 tonnes, was transported using 96 axle lines of self propelled modular transporter (SPMT) in a 4 x 2 file 24 configuration.

Upon completion of the works the vessel will have increased in length to a total of 255 metres. Elena Muñoz Collado, ALE project manager, described the work as an “engineering milestone.”

The Cruise Roma’s sister ship, the MS Cruise Barcellona, will undergo similar lengthening works in the near future.