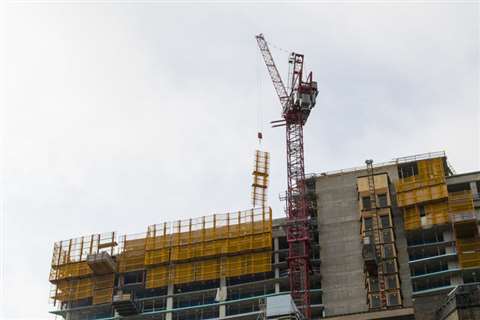 James McHugh Construction put a Potain MR 415 tower crane up on the busy streets of Chicago, USA, using an existing building as a foundation.

The tower crane has been erected on top of Block 37 in Chicago. The building is having a 34-storey apartment building constructed on top of the existing five-storey complex.

McHugh began lifting work on the tower in June 2014. The 26.5 US ton (24 tonne) MR 415 was rented from Central Contractors (Central) in Crestwood, Illinois, a branch of the All Family of Companies (All), headquartered in Cleveland, Ohio.

The MR 415 was chosen because of its ability to work in small working areas, Paul Urbanski, Central sales manager, said. “The MR 415 was initially erected on 11 tower sections so that its jib would clear the historic Cadillac Theatre, which is just across the street, when it was stowed,” Urbanski explained. “With a lack of space below for a spread foundation, the crane was tied in at the 5th floor (a height of 23 metres) during the initial assembly to reduce the foundation reactions.”

“The unique thing about the Block 37 project is that before the concrete construction could begin, 6 m tall steel trusses with segments that weighed as much as 40 tons [36 tonnes] were erected on the roof to support the additional 34 floors of construction,” Urbanski said.

With the trusses installed the MR 415 was used to lift construction materials for the job. The heaviest lifts weighed 10 tons (9 tonnes) at heights up to 142 m. Urbanski said the MR 415’s single part line capability was an added plus on the job, as it gave McHugh’s operator approximately 9.4 tons (8.5 tonnes) at 50 m and approximately 13.2 tons (12 tonnes) at 3.5 m.

The new tower at Block 37 will have 690 apartments, making it one of the tallest apartment buildings to be constructed in Chicago’s loop in decades. The complex will include an outdoor pool and spa, rooftop spa and fitness centre.