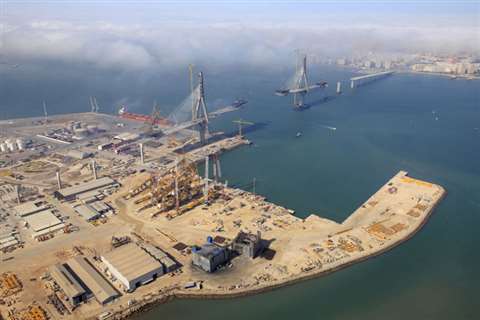 Once complete, the Cadiz Bridge will connect Cadiz with Puerto Real, the North area of old town of Cadiz

Heavy lift and specialized transportation company ALE is in the final stages of installing the Cadiz Bridge, over the bay of Cadiz, Spain.

The Cadiz Bridge will connect Cadiz with Puerto Real, the north area of the old town of Cadiz. The bridge will be 3,082 metres long and 31 to 34 m wide.

ALE has so far helped with transporting, load-outs and lifting the cabled sections of the bridge. To date, 50 bridge sections have been installed. The sections measure between 10 and 50 m and weigh 150 to 1,055 tonnes each.

For the load out of the heaviest section of the bridge, ALE used 168 axle lines of SPMT. To lift the deck into place, ALE used a combination of steel structures and 6,800 tonne capacity HLS8500 strand jack units.

Alvaro Saez, ALE project engineer, said, “We are delighted to be involved in this landmark project. We have now lifted the heaviest section of the bridge, the removable span, which measured 150 m long and weighed 4,000 tonne, and we are working to install the final six bridge sections.”

The project is scheduled for completion in May 2015.