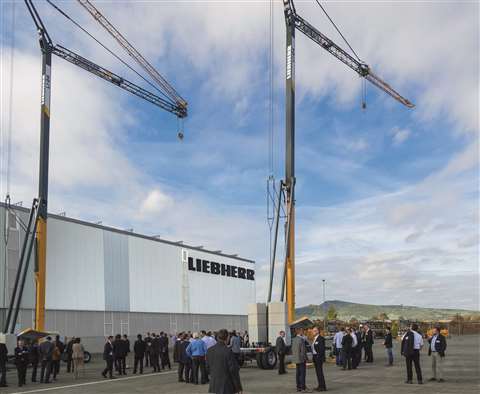 The CM 280, claimed to be one of the highest performance cranes in the 28 m category, lifts 2.5 tonnes to 12.1 m. The CM 82S4 lifts 4 tonnes. It has a maximum hook height of 21 m and lifts a 1 tonne load at jib end. The machine has a space requirement of just 5.1 by 5.1 m and, like all BKL models, has a frequency-controlled 4-stage lifting mechanism.

BKL’s high-speed axle, meanwhile, is now also available in steerable variants. It will be presented at Bauma with the CM 271 mobile 27 metre self erecting crane but is also available for the stationary cranes in BKL System Cattaneo as a semi-trailer version. The 80 km/h axle is self-steering during road use and, during shunting operations, can be electro-hydraulically steered via the crane’s remote control unit.

The second FM Gru crane on display will be the 930 RBI-FA, a self erecting crane approved for road towing, that has a 30 m hydraulic boom, a capacity at jib end of 900 kg and a maximum capacity of 2,400 kg (on two falls of rope).

It also has PLC controlled inverter drives for the winches to give low energy consumption and easy to manage operation in all work situations, the company said.

A new series of hydraulic fast erecting tower cranes will be shown by Liebherr. The L1 series will be the company’s smallest bottom-slewing tower cranes. In some ways, including the name, the new L1 recalls the first crane made by company founder Hans Liebherr in 1949. Features include improved ergonomics, good access for erection and maintenance work and a modern, attractive design, the company said. L1 will replace the existing H series of cranes.

The slewing radius is 1.9 m and a flexible support base allows the crane's footprint to be reduced to less than 4 m. For control there is the Micromove fine positioning mode, oscillation damping and an operating range limiting system. Versions are available with a standard concrete ballast or a full steel ballast which can be carried on the crane, meaning no additional transport or erection cost.

New and on show in Manitowoc’s Potain range of tower cranes will be the MDT 389, first from a new line suitable for cramped multi-crane job sites. It is one of three towers on show at Bauma, alongside the MDT 219 and the MR 418 luffer.

On the MDT 389 the slewing section, cabin mast section and the cab can be moved together as one load. The counter jib can be folded and the winch platform can be sized to occupy less space, Manitowoc said.

Like the MDT 389, the MDT 219 is also top of its range. Versions are one with an 8 tonne capacity and one with 10 tonnes. All are evolutions of previous MDT City series cranes with jibs from 55 to 65 m and hoisting capacities from 6 to 10 tonnes.

On show from the Terex tower crane range will be a 16 tonne capacity CTT 332-16 flat top. A prototype of the 332 tonne-metre crane was first shown a couple of years ago.

The German manufacturer’s second newcomer is the Wolff 275 B with a capacity of 24 tonnes, a hook path of 700 metres and a hoisting speed of up to 222 m/min.