Among many other things, it was great to see so many new cranes and old (read familiar) faces in Munich last month at the Bauma exhibition. Alex Dahm presents a selection of the many highlights. 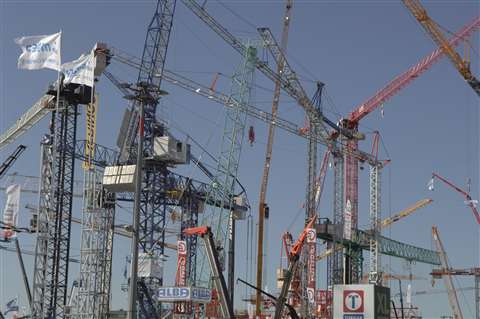 A small selection of the cranes on show at Bauma 2022 in Germany. Photo: KHL Group

Having expected to see a couple more new cranes than we were aware of it was a pleasant surprise to see so many more. It suggested a healthy state of affairs in the industry.

The huge number (so I am told) of serious buyers in attendance indicated there may well be a good amount of pent up demand on top, just to extend the order backlogs even further.

In mobile crane terms we were prepared for a couple of new 70 tonners from Tadano and Grove but not their hybrid ATs. Or the new 50, 60 and 250 tonners alongside the above from Tadano.

Tower cranes were especially well represented with new models from all the major manufacturers, even entire new series from, for example, Raimondi and Wolffkran.

As a picture is worth a thousand words, it is time to stop reading and take a look at our pictorial review. 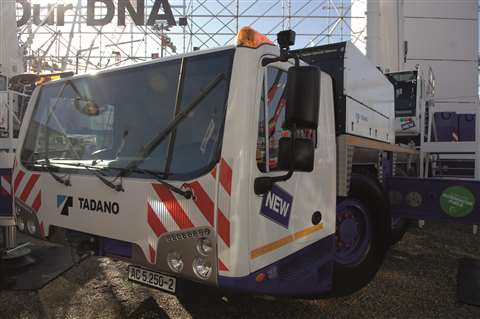 The AC 5.250-2 all terrain was one of five new cranes from Tadano. Photo: KHL 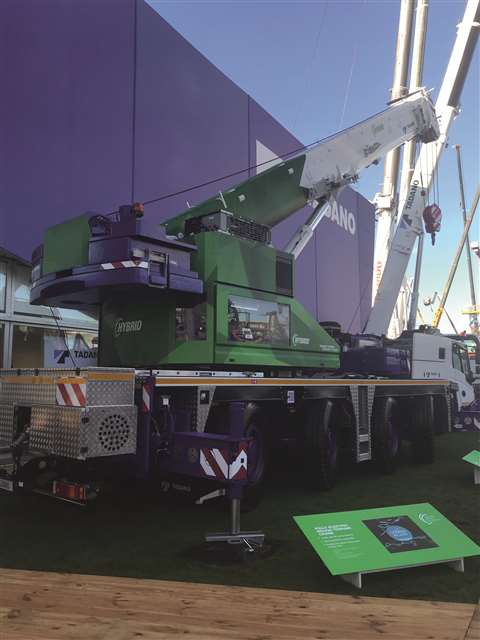 Tadano’s working prototype of a battery-electric and diesel hybrid all terrain crane is based on a 70 tonne four axle ATF machine. Early tests show two batteries give a running time of up to four hours and more batteries can be added. 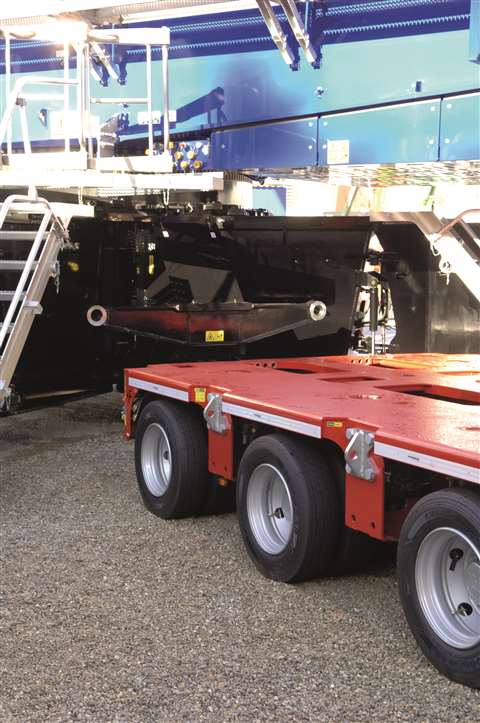 The stationary Tadano PC 38.6501 pedestal crane was shown with Faymonville SPMT modules and associated adaptors so the crane can be moved around on wind turbine sites. Photo: KHL

For use on wind turbine erection sites an integrated adapter means the crane can be coupled to four and six axle line modules of self-propelled modular transporter (SPMT). This allows movement between turbines on the narrow roads. 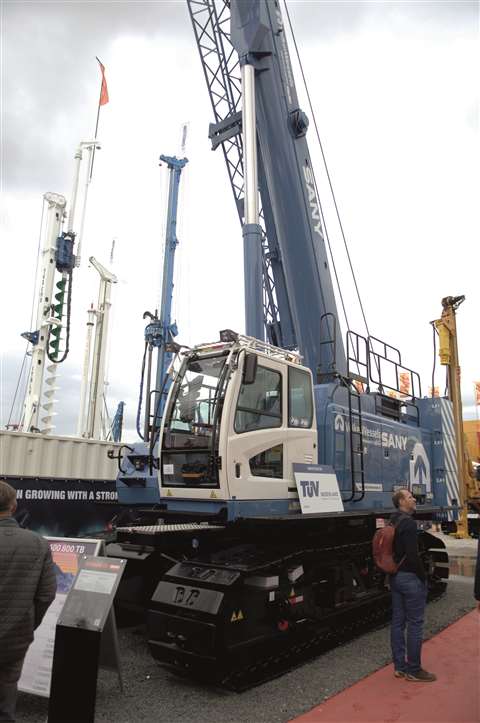 GGR Unic’s new 3.2 tonne capacity electric mini crane uses the base boom from the model 295 and the jib from a 094. Power for the new Unic URW-345 is from a 159 Amp-hour lithium-ion battery pack. Maximum lifting height is 16.5 metres and its working radius can be up to 15.7 metres. It has continuous slewing and is only 750 mm wide when completely folded and stowed away for site access via standard doorways. 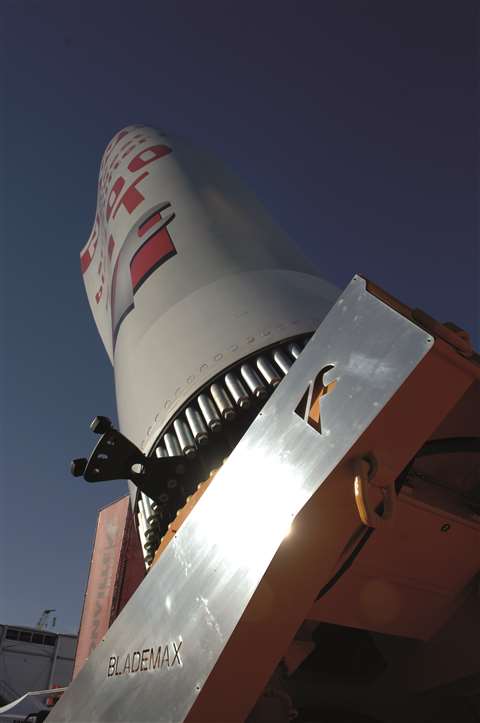 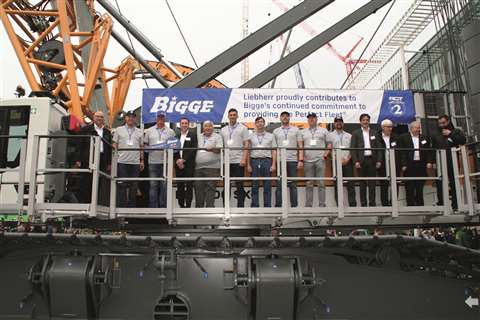 The Bigge Crane and Rigging team in attendance at Bauma 2022. Photo: Liebherr

Bigge Crane and Rigging from the USA was in acquisitive mode at the show again this year. A deal was signed with Tadano to purchase cranes across the range, including AC 8.500-1, AC 7.450-1 and AC 6.300-1 all terrains, GR-1300XL-4 rough terrains and GTC-1600 and GTC-2000 telescopic boom crawlers. Bigge has more than 600 Tadano cranes in its rental fleet.

At Liebherr on the first day of the show two new crawler cranes were handed over to Bigge Crane and Rigging. They were an LR  1400 SX and an LR 1700-1.0.

The fleet already includes more than one hundred crawler and wheeled mobile cranes from Liebherr. Several more of the 400 tonne capacity LR 1400 SXs are on order. Bigge already has two units of the 700 tonner and the latest one is for delivery in 2023.

All terrains joining the fleet will include two LTM 1230-5.1s for delivery next year.

The first showing of Link-Belt’s 120 US ton (110 tonne) capacity model 120|TT telescopic truck terrain crane. “We had a lot of positive feedback and interest on this new 120|TT. Customers are intrigued about the improved mobility and jobsite versatility,” said Andrew Soper, product manager for all terrain and telescopic truck cranes. 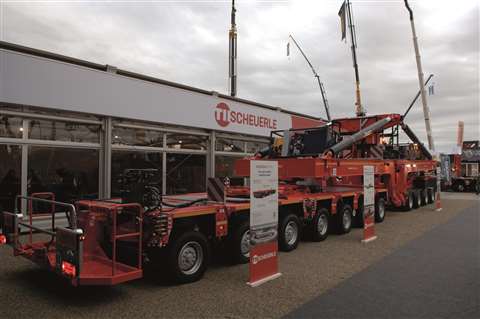 The rebrand is designed to strengthen TII Group’s position in the market. Photo: KHL 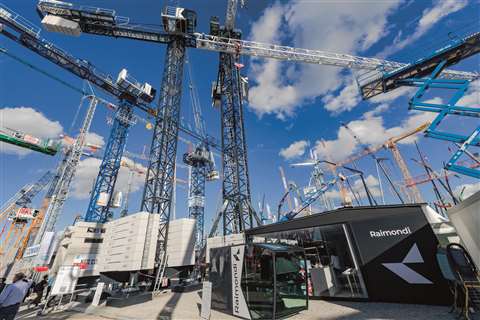 The T187 and T357 tower cranes are designed to offer modularity with multiple application of components. Photo: Raimondi Cranes

Raimondi’s new T187 and T357 tower cranes were shown at Bauma alongside the new Lumina X operator cabin, all presented in the new dark grey and white colour scheme with the new logo. Modularity with multiple application of components is a key theme of the new series.

Of the new T187 Diego Borgna, Raimondi Cranes CEO, said, “The T187 represents a big step forward for Raimondi as it has been conceptualised and designed as part of a full range of cranes – Class 110 – and not as a standalone machine. This approach has significant implications on both technical and operational levels.”

Cristian Badin, commercial director at Raimondi Cranes, said, “With best-in-class specifications in terms of lifting capacities, speed, and freestanding height, the T187 – as well as the whole Class 110 – was designed with rental companies in mind.”

The T187 is available in 8 and 10 tonne versions while the new T357 is a 16 tonner. Commenting on the new larger model Badin said, “We presented the T357 for Bauma, as it demonstrates the superior characteristics of the Class 150, Raimondi’s new range of six flat top cranes.

“With a lifting capacity between 12 and 24 tonnes, this new class was designed with the Central and Northern Europe, American and Canadian markets in mind.” 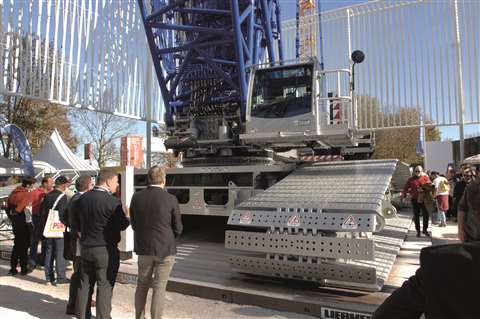 Liebherr’s recently announced 700 tonne capacity LR 1700-1.0 was the largest crane at the show. 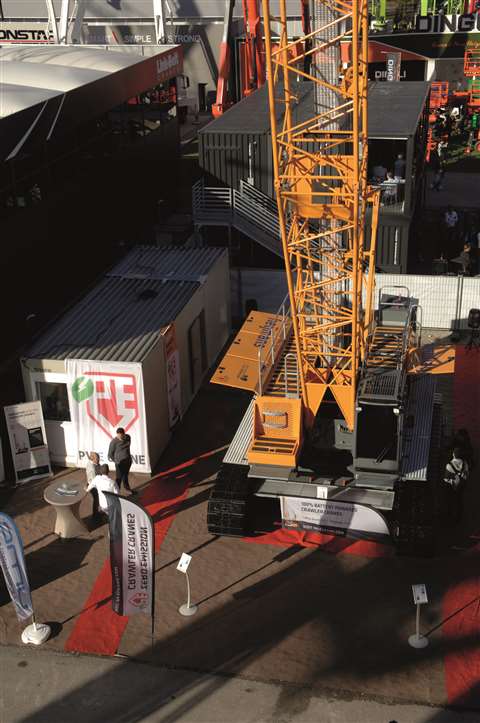 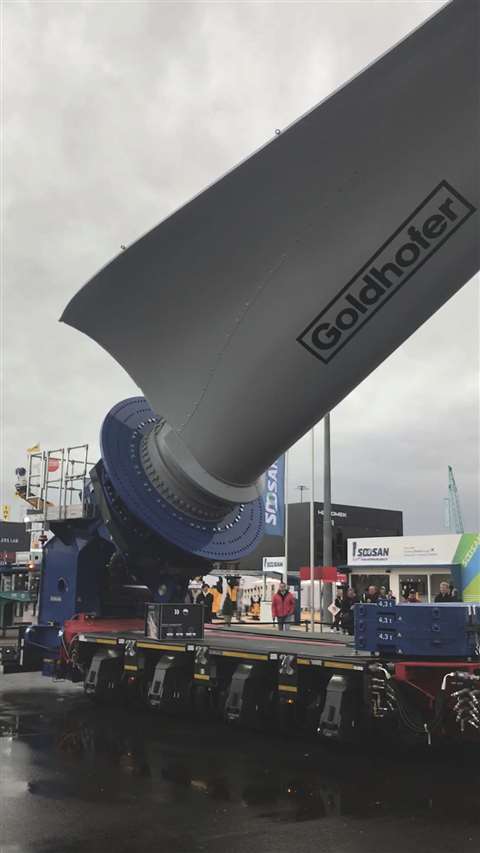 German manufacturer Goldhofer revealed the FTV 850 rotor blade transporter said to be ideal for transporting on challenging routes. The company said the machine, which is mounted on a four-axle, self-propelled PST/SL-E split combination (1/2+1/2) widened to 4,010 mm, is designed for maximum stability and safety and is compatible with existing SL products.

The blade carrier for extra-long and heavy turbine blades has adapted widening, which offers better tilting stability and allows for transportation of loads with a higher centre of gravity.

Among several models on show tower crane manufacturer Wolffkran revealed its new concept FX 21 Clear flat top crane range. Described as “the start of the new family concept,” the FX 7021, FX 6021 Clear and FX 6521 Clear models are in the 140 to 200 tonne-metre class range.

Each of them has a tip load capacity of 2.1 tonnes. The idea is that the FX 6021 is easy to upgrade to the two larger models by exchanging a few components.

Mohamed Abouelezz, head of product management at Wollfkran, said, “For the FX the idea was to create a family and we are trying to standardise components.

“At the moment there is a lot of difficulty when it comes to materials and costs so the idea was ‘how can we reduce the cost of cranes?’” Cranes in the new product family share components and jib sections, winches, etc. 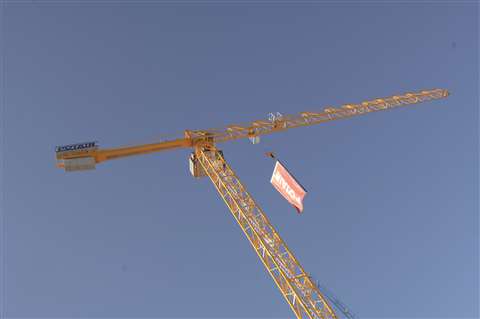 Potain’s MDT 159 flat top is the latest model in the city crane series. It is aimed at small to medium size projects in urban areas. Capacity is 6 tonnes and it can have up to 60 metres of jib.

Two new trolley systems are available, one with permanent four falls and the other with automatic reeving for owners to select the best option. All mechanisms have frequency inverter drives and the hoist winch is a 33LVF15. 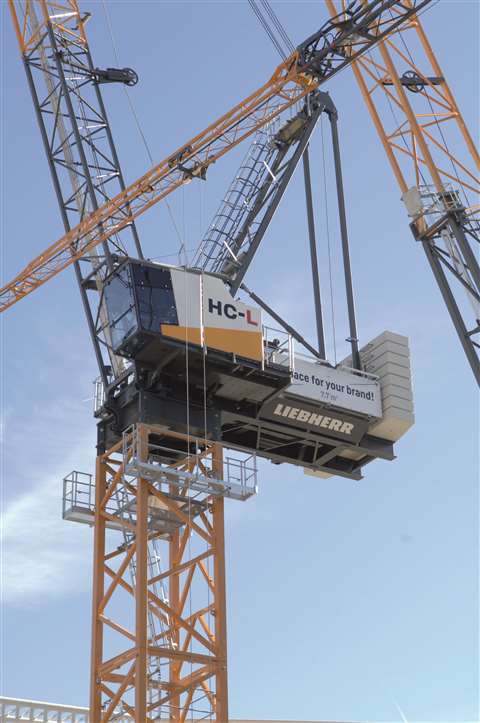 Liebherr’s 258 HC-L 10/18 Fibre is a 10 tonne luffer with 25 mm diameter synthetic fibre hoist rope made by Teufelberger in Austria. Capacity at the end of its 80 metre maximum jib is 2.5 tonnes as against 1.9 tonnes for the steel rope version. 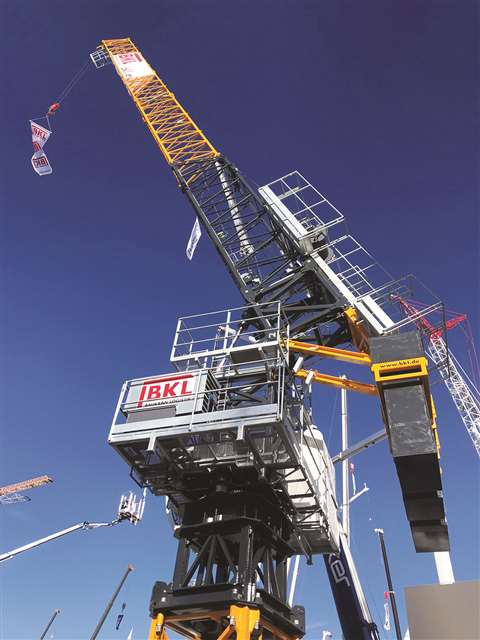 The luffing jib SLH 70.4 from manufacturer Saez in Spain is a new departure for BKL from Germany. Photo: BKL

Tower crane rental specialist BKL Baukran Logistik was exhibiting there for the 15th time. It showed an hydraulic luffing jib tower crane – a new departure for the German company – and a 35 metre self erecting tower crane, the CM 350 from Cattaneo in Italy.

The SLH 70.4, left, from manufacturer Saez in Spain is a 4 tonner that has a 2.6 tonne tip load at its maximum 55 metre radius.

On the Saez stand, BKL had a bigger sibling in the form of the 10 tonne SLH 205, right, also with a 2.6 tonne tip load at 55 metres. This model has a 37 kW hoist winch. On the Manitowoc stand, BKL had a new 150 tonne capacity Grove GMK 5150XL all terrain crane from its German fleet. 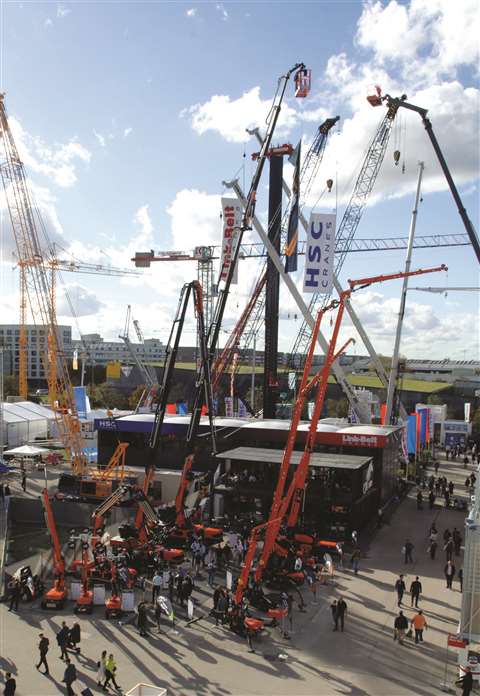 An aerial view of Italian manufacturer Jekko’s stand. One of the new models on show, in three electric versions, was the 2.8 tonne capacity SPX328 mini crawler crane. 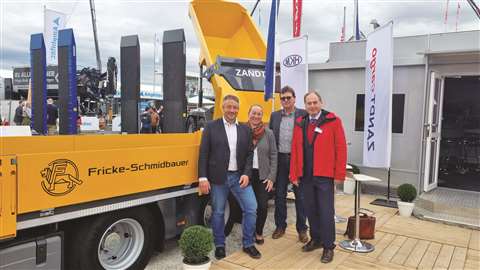 Subsidiary company Fricke-Schmidbauer added a TAT-B 180 low loader trailer from Zandt Cargo. Like Palfinger, Schmidbauer celebrates its 90th anniversary 2022. It was also a contractor involved in the build-up of the show itself.

Schmidbauer signed a deal with Liebherr at Bauma 2022 as it expanded its fleet. Photo: Liebherr

Large high-capacity cranes are always particularly noticeable at a trade show and buyers for these from all around the world were also prominent. Without visitors from China or Russia at the show, numbers might have seemed depleted but this wasn’t the case.

Just as Bigge from the USA did, German crane rental specialist Schmidbauer’s underwent a shopping spree and added new equipment to its fleet at Bauma.

The company signed a deal with Liebherr which included, among other things, two new lattice boom crawler cranes, namely a 1,350 tonne capacity LR 11350 and an 800 tonne LR 1800-1.0. There were also four wheeled mobile telescopic cranes, from 50 to 110 tonnes, to update the fleet. 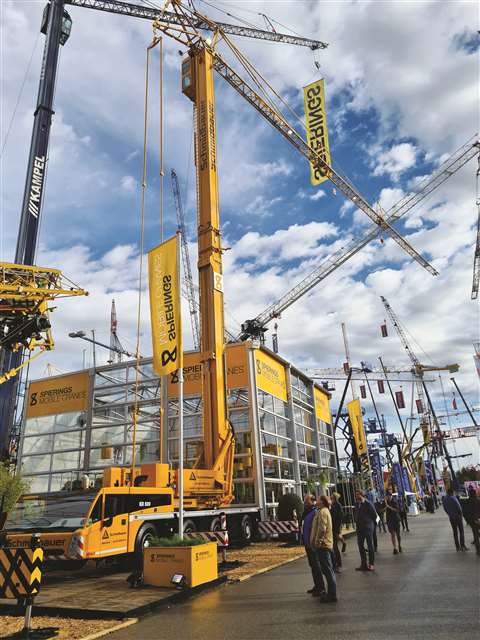 Also on Schmidbauer’s list was the Spierings SK597-AT4 eLift, displayed on the Dutch manufacturer’s booth. Schmidbauer said, “Keeping up with the times means tackling projects that promote the energy transition”

From Tadano, Schmidbauer received a 200 tonne capacity Tadano GTC 2000. It is now the largest telescopic crawler crane in the fleet. 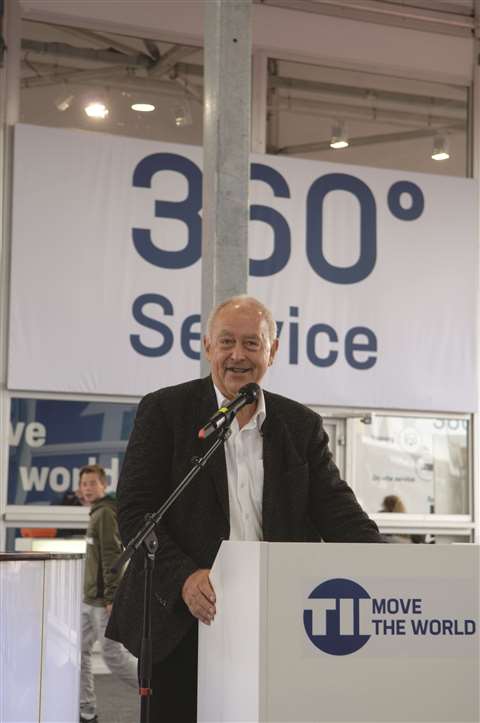 Professor Franz-Josef Radermacher talked about the value of transport in the drive for climate change reduction, at the TII Group stand at Bauma. Photo: KHL

In addition to TII Group’s rebranding, the company is focusing on its contribution to the reduction of global warming. Professor Franz-Josef Radermacher, economist and sustainability researcher, made a presentation on the TII stand during the show.

Arcomet A40 Eco City and A47 Eco City tower cranes 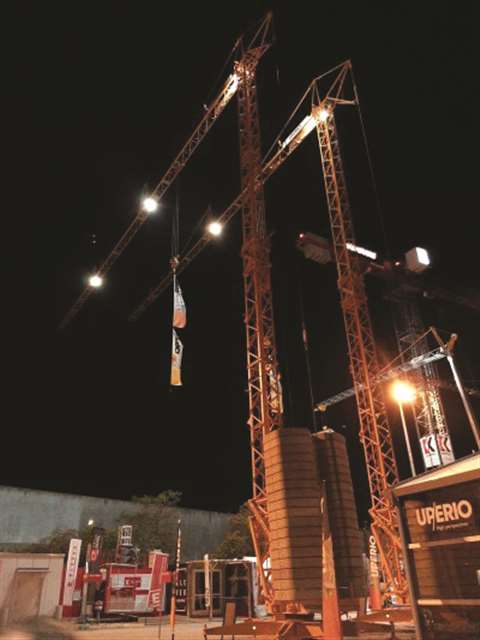 Drawing the curtains on another Bauma, tower crane specialist Uperio showed its Arcomet A40 Eco City and A47 Eco City tower cranes, plus the new concept Opti tower crane.

Reviews of Bauma 2022 were first published in the November and December issues of International Cranes and Specialized Transport.