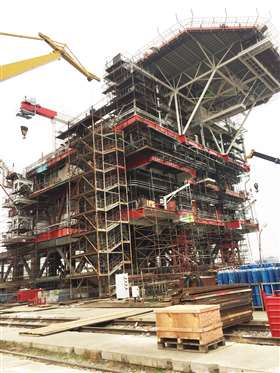 The topside weighs 2,570 tonnes. Here ALE is preparing it for offshore pulling

Heavy-lift and transport specialist ALE has started the first phase of heavy lifting operations for the Korchagin oil field development project in Russia. ALE has been contracted to perform the engineering, weighing, jacking, load-out and offshore pulling of a satellite platform (SP) topside for the project in Astrakhan, southern Russia.

The project commenced in November 2017 and involved jacking the topside to a height of 1.5 metres so that the client can integrate skid beams between it and the desk-support frame (DSF) underneath. ALE also weighed the topside (which has a total weight of 2,570 tonnes).

Lernik Mirzakhanyan, sales executive for ALE Russia, said: “Considering the sheer size of the desk-support frame on site, we have completed a complex engineering design to account for the limited space available to perform the operation. As we cannot use forklifts or cranes to rig the equipment, we have utilised manual tools. For project efficiency, the weighing was carried out by measuring the hydraulic pressures and flow rates rather than weightors.” 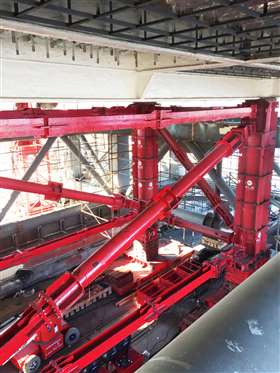 ALE integrating the skid beams underneath the DSF

The next phase will involve the load-out of the topside together with the DSF to a transport barge. The combined weight is around 3,100 tonnes and will start in December 2017.