Using the right tool for the job is a good mantra to use in all areas of life. It is particularly true for the specialized trailer industry, where even small differences can have a big impact for the end user. As a result there is a diverse range of specialized trailers on the market that their manufacturers hope find the sweet spot between flexibility, for a range of applications, and becoming the ‘go-to’ tool for certain types of transport. 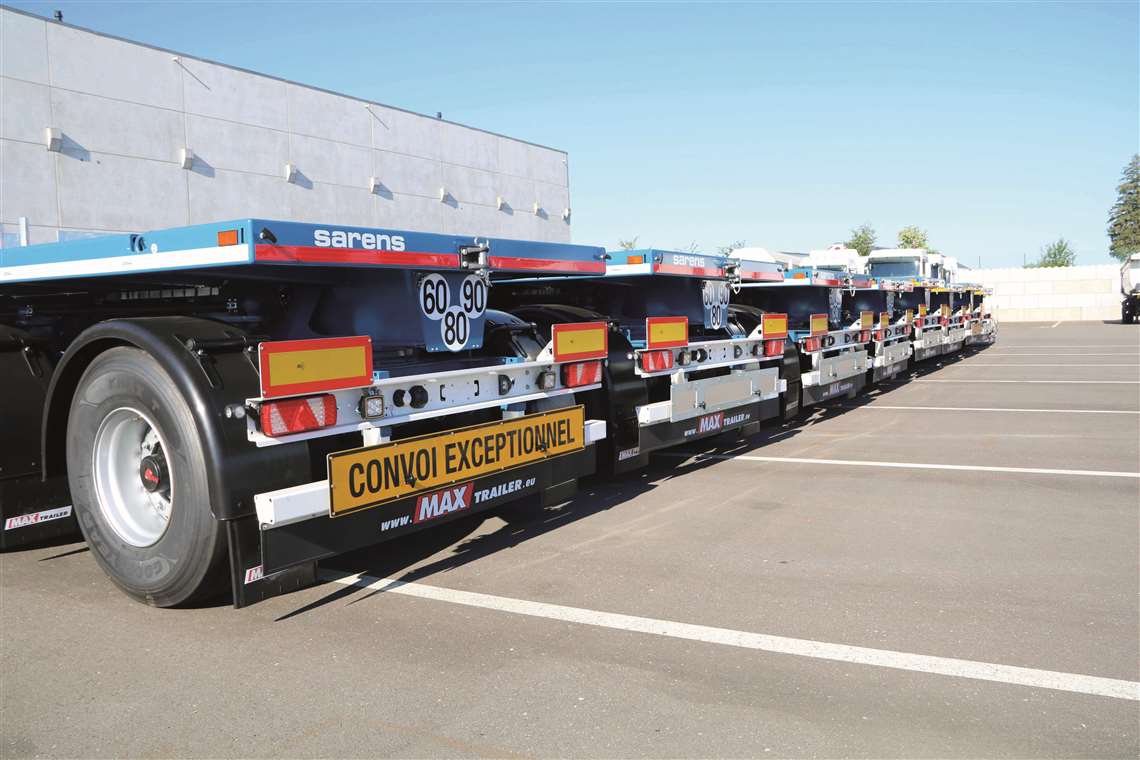 The trailers are equipped with a hydro-mechanical steering system. The three- and four-axle flatbed Max410 trailers are suited for compact loads, says Faymonville, while the two three-axle Max110 low-loaders have an extendable loading platform for moving longer goods.

In order to transport six CAT engines, each weighing 219 tonnes, Ghanaian heavy haulage specialist Monpe Heavy Haulage opted to use its Faymonville ModulMax trailers. It transported them 1,285 km across Africa, from Ghana to Niger using two ten-axle combinations of twin-tyre gooseneck trailers. This meant that, in total, Monpe made three trips to move all six engines. The turnkey organisation of the project was handled by German logistics company DB Schenker. 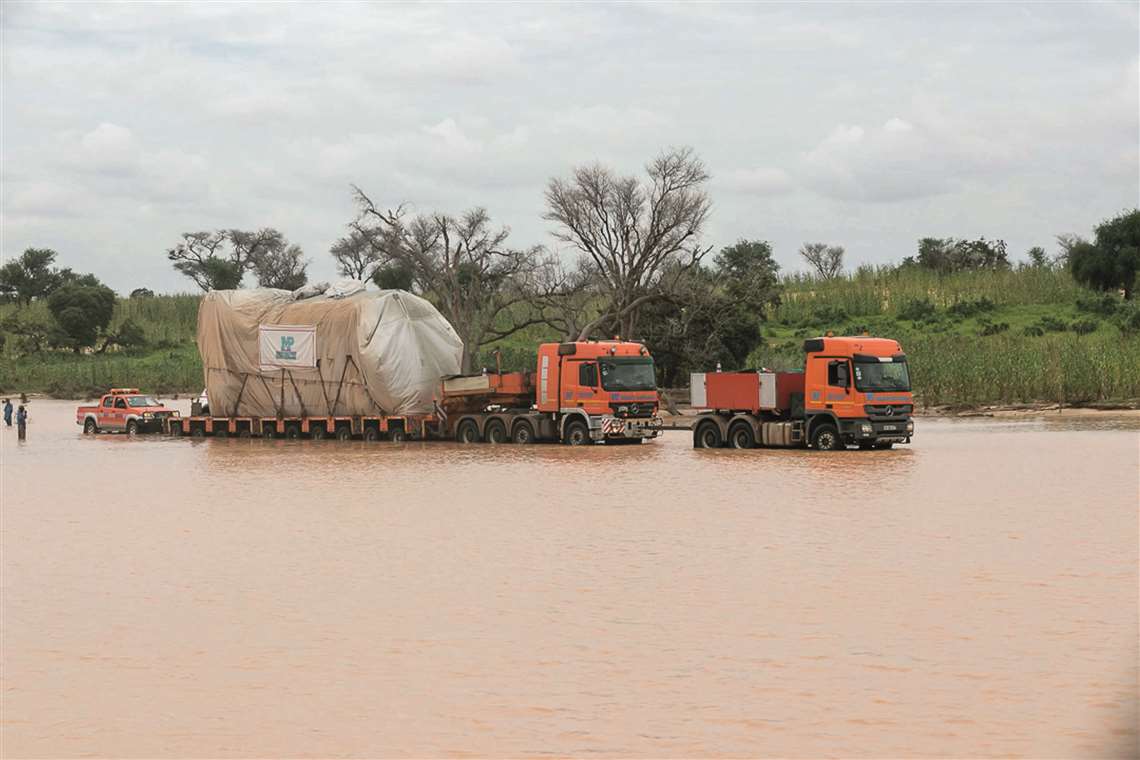 Monpe collected the engines from the Ghanaian ports of Tema and Takoradi, where they arrived from Germany. Initially, Monpe was planning to take the fastest and most direct route through Burkina Faso into Niger. Changing security conditions, however, meant that this became an unsafe route, so Monpe determined a new route via Togo, Benin and then into Niger.

As well as crossing boarders, the ten-person Monpe convoy encountered multiple obstacles including: floods, bridge structures; narrow, rough roads; and difficult weather conditions. The crew also had to meet multiple Covid-19 requirements. Street furniture and electric lines had to be removed along the route. A video of the transport job can be seen here.

Looking to target the container transport sector, Germany-based trailer and transporter manufacturer Scheuerle, part of the Tii Group, has developed its range of EuroCompact gooseneck trailers with the FL02 and FL03 models. The two-axle FL02 is in the 37 tonne payload class and the three-axle FL03 is in the 48 tonne class.

The low beds have a telescoping platform deck. In the basic position, the loading area has a length of 6,620 mm for the two-axle model and 7,610 mm for the three-axle models. This extends to 12,270 mm and 12,610 mm respectively. Scheuerle says this facilitates the loading of 40 foot containers. Despite the long extensions, the trailers still fall under single-operator regulations in certain areas.

The trailers have a deck height of 200 mm and the loading height in the driving position is 300 mm or 325 mm (two-axle and three-axle, respectively). This means that loads with heights of up to 3,900 mm can be transported approval-free throughout Europe.

Container transport is a growing transport segment in Europe, confirms Netherlands-based trailer manufacturer Broshuis. At the end of 2020 the manufacturer completed the delivery of 250 MFCC HD container chassis to German transportation specialist NuFaTec Service Group. The MFCC HD container chassis is suitable for a wide range of tank container and swap-body applications and has a high load capacity with a low tare weight, says Broshuis.

The three-axle chassis has an Easy Select System, so that the driver only has to get out of the truck once to put set the chassis. The chassis is designed to be flexible and can transport containers of different sizes.

German heavy-duty transport equipment manufacturer Goldhofer says it takes the differences in international road traffic regulations very seriously and gives them full consideration during the initial product design phase of its trailers. Goldhofer says the focus in the development of its trailers is on making the vehicles as versatile as possible so that they comply with different national regulations as standard. 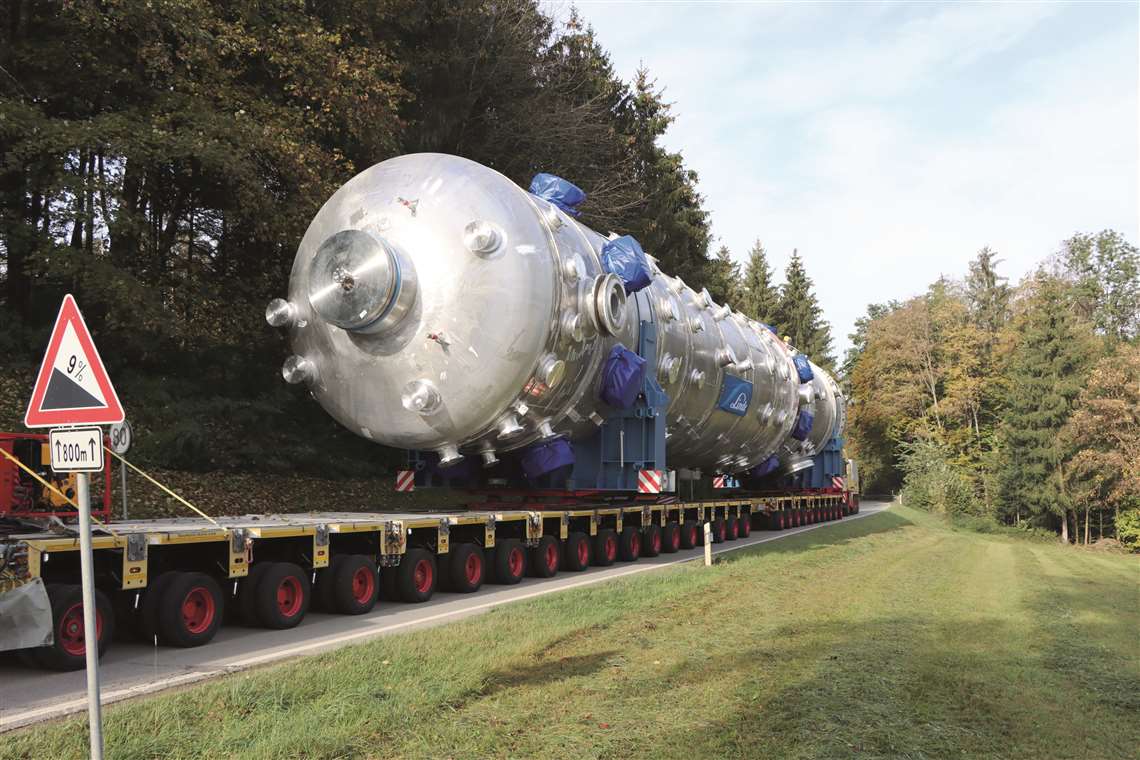 Bornheim, Germany-based heavy haulage company Viktor Baumann used its Goldhofer THP/SL-L axle lines and 200 tonne turntables to move two heat exchangers weighing 274 and 278 tonnes respectively and around 30 metres in length. The journey across Germany, to the Danube port of Passau, took four days. For safety reasons the heat exchangers had to be transported during the day and due to the size of the vehicle combinations the convoy had to mainly travel on secondary roads. Six tractor units were used in push-pull combinations on gradients of up to 12 percent.

For transport companies operating where spread axle configurations are not required to maximise trailer loads, USA-based Fontaine Heavy-Haul has launched the Magnitude 60LCC trailer. It hauls 60 ton (55 tonne) loads in 13 feet (4 metres) with 4 axles close coupled. “If local regulations allow a more concentrated load this trailer is a great choice,” says Todd Anderson, VP sales and marketing, Fontaine Heavy-Haul. “It can handle 60 tons without adding a flip box or a spreader. This means our customers get a much lighter trailer setup at a much lower acquisition cost. Plus, manoeuvrability is greatly improved since the overall length is reduced by more than 11 feet compared to a trailer equipped with a flip box, spreader and fourth axle.” The trailer has an 18 inch deck height. For spread axle configurations there is a 23 inch (580 mm) flip box and a Fontaine EQ1 spreader with a fourth axle. In this configuration the trailer can haul 55 tons (50 tonnes) in 16 feet (5 metres).

German transportation company Rüdebusch has extended its fleet with the addition of a low bed trailer from German semi-trailer manufacturer Kässbohrer. The K.SLL 2 low bed has a low loading height and a ground clearance of 100 mm, says Kässbohrer. The low bed has a pool length of 6,810 mm and a king-pin capacity of up to 24 tonnes. It is extendable by 5,550 mm. To provide maximum manoeuvrability, the vehicle has 12 tonne capacity hydraulic axles each with a turning angle of 42 degrees. The K.SLL 2 is available with a detachable gooseneck shortening designed to shorten the time needed for loading and enabling front loading.

For the transport of construction machinery, concrete supports and other long components German haulage firm Brabänder Robert Transportunternehmen has expanded its fleet with the purchase of an S3H-S18 three-axle semi low loader from German trailer manufacturer Doll Fahrzeugbau.

The S3H-S18 has lashing points next to the main frame plus additional lashing points for excessively wide loads, which Doll says makes it suitable for transporting construction machinery in a range of different weight classes.

The S3H-S18 has multiple pocket rails so that even partial loads can be fastened tightly. The trailer has wheel loader slopes on the separation point and a manual-locking intermediate table. The semi low loader has a double ramp that secured by ramp cylinders with an integrated mechanical locking mechanism. Doll says this negates the need to use chains for extra security. The ramps are also easy to remove for the purposes of loading large loads with an overhang. 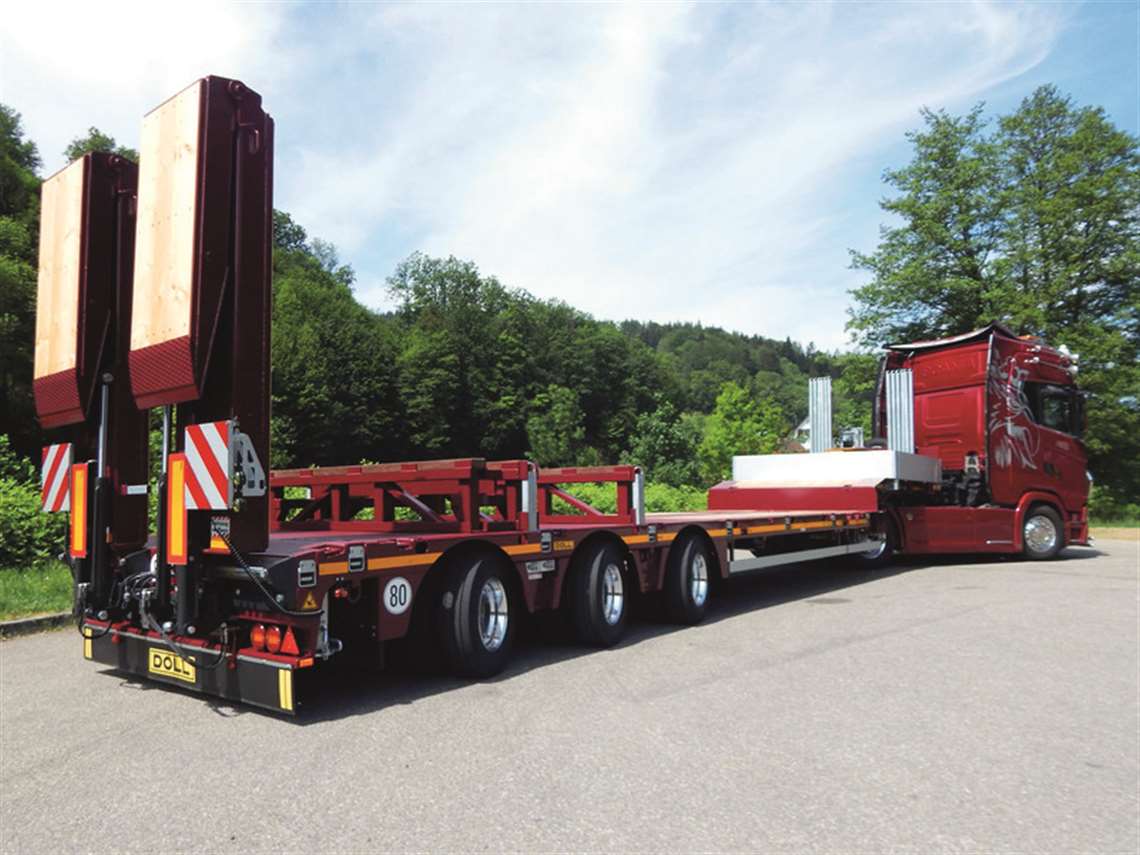 The growth of the wind sector around the world continues to create demand for specialist trailers designed for these applications (see our December 2020 wind turbine erection and transport feature for more on this subject).

To facilitate the movement of the 49 metre long blades Collett used its three Nooteboom Super Wing Carriers. Vestas gyro-static frames were fitted to accommodate the tip frames of the Vestas blades with optimum manoeuvrability on the trailer to reduces stress on the blade during transport. In total, there were 120 main components, plus ancillary items.

From the above examples, we can see that there is more choice than ever before when it comes to selecting exactly the right specialized trailer for any given load. Necessity may be the mother of invention but choice is the result of a healthy and competitive free market. 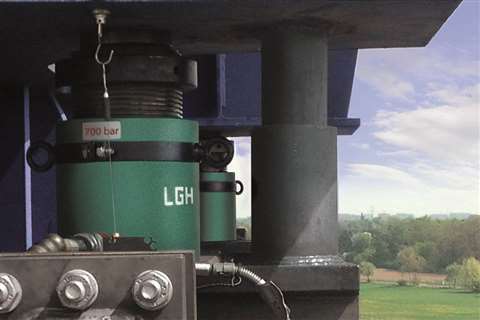 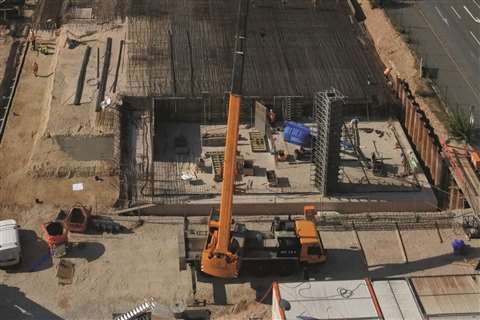 IC50 2021: Positive path
Little if any negative impact from Covid-19 on the IC50 ranking of the world’s largest crane-owning companies saw it continue on a growth path, this year by almost 8 percent. ICST reports 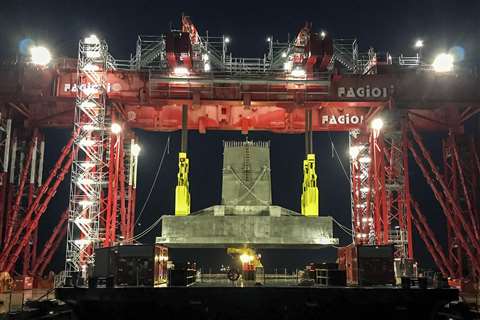 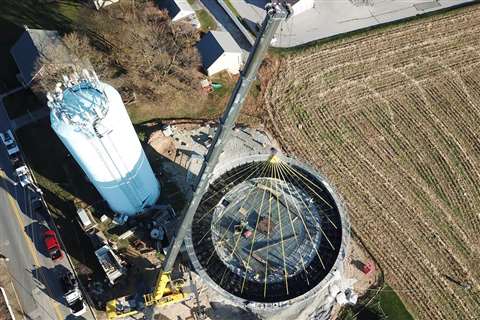