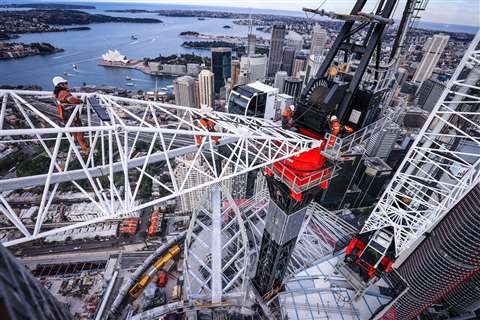 Marr preparing to remove the lattice boom of the M390D at the top of the new Crown Sydney building. Photo: Getty

Working 300 metres above Sydney Harbour, Marr Contracting has removed one of its large luffing jib tower cranes from the Crown Sydney building in Australia.

After the project topped out it was time for Marr to remove its M390D luffing tower crane. It was working atop the Crown Sydney for 27 months. Work to remove the crane included lifting its 46 metre boom and other sections using Marr’s recovery crane system.

Crown Sydney will include 349 hotel rooms and suites, luxury residential apartments, 14 restaurants and bars, retail outlets, and pool and spa facilities. It is on the Barangaroo foreshore and has a striking architectural design. Both of these presented construction challenges to Crown.

Marr Contracting is known for its different or unconventional solutions to such challenges and these were no exception. With the building on a congested waterfront site between the harbour and another construction site, the crane solution had to be unique, Marr said.

Heavy lifting capacity was needed both for some of the structural elements low down in the building on the gaming floor and in the 75 storey high rise element of it too.

“Having a long-standing working relationship with Crown’s construction partners, they got us in early to help come up with a solution. When they originally contacted us, their primary concern was borne out of a previous experience where the craneage solution wasn’t able to meet the demands of working at height in a high wind area like Barangaroo. The brief, in short, was to come up with a solution that would speed up the construction programme without compromising on safety or quality,” said Simon Marr, managing director.

Marr said it developed the bespoke super high-speed M390D with a high capacity winch system for the high-rise construction. Lifts of as much as 25 tonnes were made from ground level to the top of the tower in just over a minute, Marr said. The crane could also work in the high winds at that height.

On the lower levels of the tower one of Marr’s giant Favelle Favco M2480Ds, a 330 tonne capacity diesel hydraulic luffing jib tower crane, handled the heavy lifts. It was used to place 100 tonne beams and 50 tonne columns in single lifts on the congested site. This reduced build time, was safer and reduced complexity on site, Marr said.

The M2480D also lifted machinery, for example, excavators and drills rigs, which saved the cost of crawler cranes and allowed excavation work to be taken off critical path, Marr said.

An in-house designed three-beam internal climbing system was used to suit the jump-form construction method. It reduced the number of climbs and disruption to the project by around 30 per cent, Marr said. A typical 20 metre climbing cycle was completed within two hours.

Also on site were another M390D and an M440D to help build the gaming floor and hotel. The Crown Sydney building is scheduled to open in December 2020. 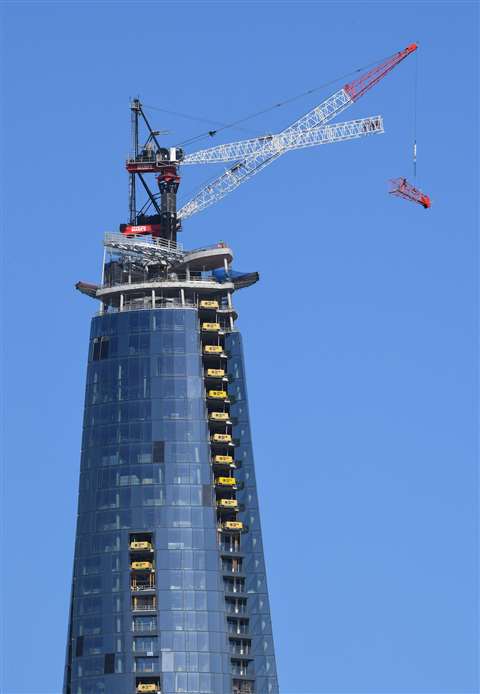 A section of the M390D’s boom being lowered as dismantling begins. Photo: Getty