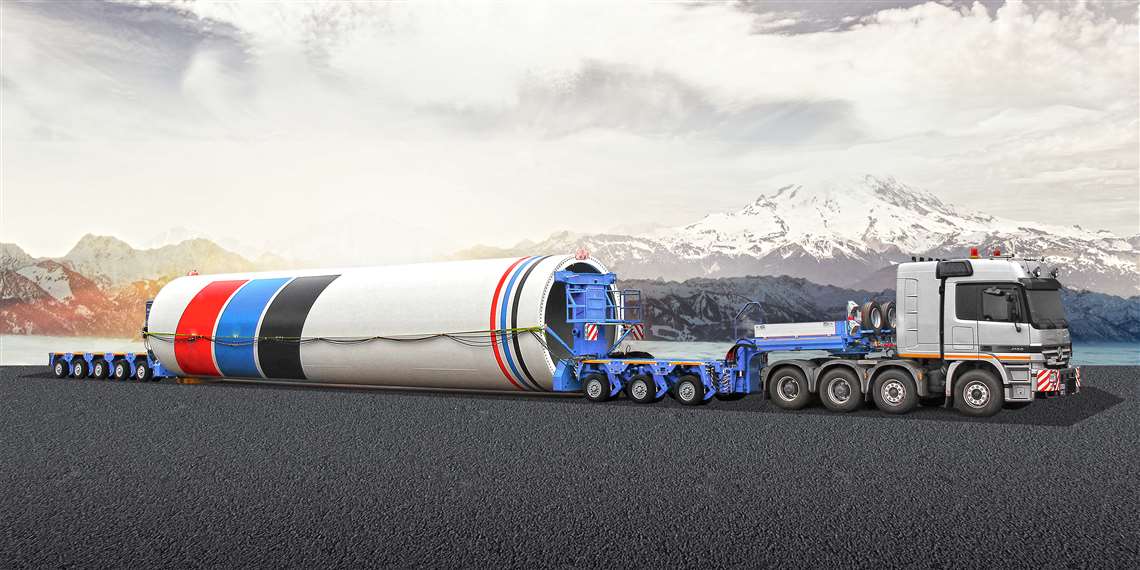 Previously, Scheuerle explained, the UltralightCombi was used in a 4+6 combination comprising a front bogie unit with four pendulum axles, one deck bridge and one rear bogie with six axles. The increased bending moment of the new models, the U10/U11/U12 series, makes it possible to have a combination of 5+7 axle lines, said Scheuerle. This facilitates an even greater payload for the vehicle operator through the use of two additional axle lines.

The U10 and U12 series platform vehicles have a width of 2.55 metres and comply with EC standards and Road Traffic Licensing Regulations (StVZO).

The new UltralightCombi platform trailer is equipped with the tried and tested pendulum axles of Scheuerle’s EuroCompact models along with the steering of its InterCombi vehicles.

The gooseneck is very similar to that of the EuroCompact low-bed semi-trailer, said Scheuerle, meaning that continuous fifth-wheel load adjustment (as seen in the EuroCompact) is now available for the UltralightCombi series.

The new versions are compatible with previous models, said Scheuerle, plus the UltralightCombi U10 and U11 versions can still be combined with modules of the InterCombi and EuroCombi series.

Scheuerle said that vehicles in the UltralightCombi series can be used for a wide range of tasks. Due to the axle line loads and the EC-compliant vehicle width, it claimed the modular platform trailers are suitable for the transport of large and heavy loads on public roads. Their low dead weight means they facilitate more compact combinations with the same payload compared to the modules of the Combi series, Scheuerle added. Construction machinery, components for wind turbines, containers, transformers and crawler crane components are typical loads for this modular platform vehicle.