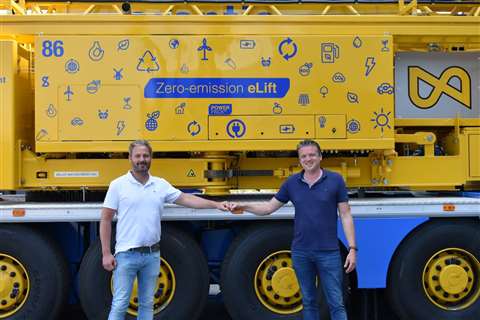 Dutch crane rental company Jos Blom Kraanverhuur (JBK) has ordered three new Spierings mobile cranes as part of a drive to reduce exhaust emissions at the point of use.

Alkmaar-based JBK said it placed the order in response to an increasing number of customer requests for its cranes to work emissions-free. The order comprises two SK597-AT4 eLift cranes and one SK487-AT3 eDrive, also known as the City Boy. Deliveries will be in 2021, 2022 and 2023.

The eLift crane functions can be powered by mains electricity via a plug-in cable connection while the City Boy has an electric drive and an onboard battery for traction, allowing it both to travel to site and be operated all by electricity.

Commenting on the move Richard Blom at JBK said, “The Spierings cranes from the early 2000s were already able to work electrically, but this required an electricity connection of 63 amps. With the eLift cranes we buy now, we can work a whole day with only 10 amps, which makes electric lifting a lot more accessible. Spierings has chosen to build in a battery pack that serves as a buffer to make this possible.

“With the City Boy that we will add to our fleet in 2023, we will also make it possible to drive emission-free into- and out of the city. The SK597-AT4 eLift is a compact crane with a lot of boom length, which we can use in a wide range of applications.”

For his part Maarten van Brink, Spierings Mobile Cranes sales engineer, said, “We are very pleased that Blom again expresses their confidence in Spierings with this order. Blom has 20 cranes from Spierings and is a great ambassador for our brand. We have seen the demand for our eLift models increase enormously over the last six months. The cranes with only a conventional diesel engine are making way for the eLift cranes.

“With more and more users of electricity on a construction site, a crane must also use this energy economically. Thanks to the built-in battery, we no longer draw power peaks from the grid, thus avoiding the inconvenience of tripping fuses.”

Van Brink said more than 30 eLift cranes have been delivered in the Netherlands and abroad.