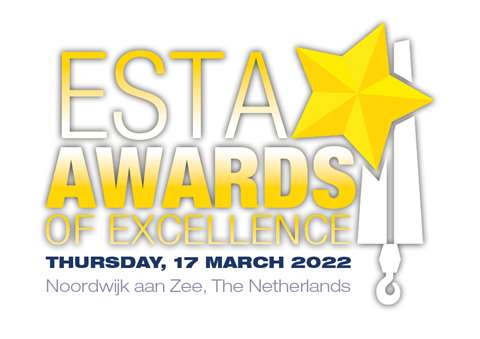 An impressive 36 companies have been shortlisted for the 2022 ESTA Awards contest, from a total of 45 entries.

The winners from this shortlist will be announced at the annual awards dinner, on 17 March, in Huis ter Duin, Netherlands during a gala dinner.

The companies shortlisted are presented according to their respective award categories, along with short descriptions for each project, in the sections below:

Four all terrain and two mobile folding construction cranes worked together in groups to complete a complicated sequence of lifts and handovers to erect roof beams, each made up of four 6 tonne sections, for a new sports hall in Sweden.

Challenges to install flood barriers using a modern mobile crane in an ancient Dutch town included working partly under water, with limited space close to multiple obstacles such as drawbridge railings, and the fact that the impending flood allowed limited time for preparation.

Installing a new 122 metre suspension bridge’s deck sections that couldn’t be lifted at long radius from above was achieved using an articulating loader crane on a truck on a spud barge Instead of a giant crane reaching from the river bank.

A 250 tonne crane was chosen for the installation of a large 49 tonne component in a confined space at a hot steel rolling mill in Denmark with a line of red hot 30 tonne slabs moving past nearby and numerous constraints on outrigger placement being just two of the challenges.

A trio of wheeled mobile cranes upto 500 tonnes unloaded, turned and positioned six tanks, each 30 metres long, nearly 10 metres in diameter and weighing 67 tonnes, in a limited working area while the terminal continued to operate.

A mid-air handover between two cranes was a highlight of this project to move a cylindrical processing tank, 15 x 15 metres, from where it was prefabricated to its installation point over a pipe rack 60 metres away, using a total of four cranes between 100 and 750 tonnes capacity.

Offloading a 313 tonne dredger at a project site was the complicated third part of a job where the main issues were poor (sandy) ground conditions and a large turning radius, solved using four large wheeled cranes lifting together on compacted ground with wooden mats and steel plates.

A crawler crane was chosen over a tower crane to build a car park in Denmark but extra careful planning was required when it came to dismantling the boom as the completed building formed a courtyard area with the crane right inside it and no simple way to remove it.

Special measures were needed with three crawler cranes and barges when the submerged wreck of a ship in pieces weighing up to 800 tonnes had to be lifted and removed from a dock in the Italian port of Ravenna on the Mediterranean.

More than 100 wind turbine jackets, each weighing up to 2,250 tonnes, were loaded out from the quayside onto barges for an offshore wind farm using one of the world’s largest cranes, the Mammoet PTC 210-DS super heavy lift ring crane, instead of the usual SPMT method.

A striking new aluminium crew transport vessel, nearly 74 metres long and weighing 400 tonnes, was delicately lifted using a pair of 600 tonne capacity crawler cranes and then cradled on two columns of SPMT and modular trailers with power packs to move it, all in a tight time schedule and on poor ground that had to be made good.

After 18 months of planning and finding ways to avoid or clear obstructions from half a city, including hundreds of trees, plus viaducts and overhead power lines, a pair of plastic tanks more than 11 metres long (20 metres loaded) and 10 metres wide, made their way by road, then river and road again to their destination.

Moving a new 29 tonne transformer from its factory in Northern Italy to a power station in the mountains, 2,000 metres above sea level, presented multiple challenges in addition to the altitude, including 44 hairpin turns, steep inclines, narrow galleries and jumping an old bridge.

Building two steel bridges from a minimum number of girder sections meant each load from factory to site had to be a big as possible but it still meant 40 exceptional transports out of a total of 60 loads, some of which were

A 180 tonne transformer and a 160 tonne shunt reactor were the two largest loads out of a total of 680 tonnes of wind farm equipment imported and delivered in a two-month period over a total of more than 5,000 miles, from mainland Europe to Scotland.

Delivery of a 334 tonne gas turbine in Italy from Genoa to the Turbigo power station was a door-to-door project, theoretically with a 190 km journey, but the load’s size and weight precluded the use of conventional road transport on that route so the solution was a heavy lift ship virtually circumnavigating the country.

Transporting, offloading and installing this 184 tonne transformer presented challenges that included getting a 60 metre long girder frame, on 18 axles with a gross vehicle weight of 275 tonnes, across motorways, along narrow roads, up and down steep inclines, across a railway and through a village.

A multi-modal approach was adopted for the delivery, by road, rail and water, of four transformers, each one weighing more than 300 tonnes and standing 4.5 metres tall, at one point forming a total combination length of 112 metres, by 6.3 metres wide and a total weight of 757 tonnes.

Equipment and techniques employed on this job in Italy to launch a 2,800 tonne, 180 metre-long bridge section, included lifting it with a hydraulic jack up system, carrying it on SPMT onto a barge, plus sliding, skidding, lifting and lowering with strand jacks, a tower lift and climbing jacks used along the way.

A full gamut of lifting and transport equipment and methods has already been used in the first parts of a challenging three-phase project to replace an old canal bridge with a new one. Each bridge weighed 600 tonnes and they are more than 60 metres long, 15 metres wide and 17 metres tall. Final placement of the new bridge is due in mid-2022.

Removing the 1930s Dutch Lekbrug bridge weighing 5,000 tonnes and 160 metres long, involved a long list of methods and machines, including cranes, SPMT, lifting gantries, jacks, barges and a ballast system in an operation to remove it and move it further along the river for dismantling.

Crawler and wheeled mobile cranes up to 750 tonnes were used alongside more than 200 lines of modular trailer and 20 prime movers to deliver 28 engines of 116 tonnes each, five even heavier transformers, plus more than 500 lowbed and standard loads, in four months, over a distance of 3,500 km.

An in-house designed and developed fully demountable platform, ladder and barrier structure for working at height which can be used on more than one size of mobile crane in the UK to minimise the risks with no negative impact on the crane’s structural integrity or operation.

This challenging project saw the transport, tilt-up erection and then vertical movement and installation of a 458 tonne reactor vessel in Italy, using a 600 tonne crawler crane, 36 lines of SPMT, a skidding system plus tailing and support frames, all within the constraints of a confined area with many obstructions.

Transporting large chemical vessels by road involves negotiating camber and inclines that all impose a degree of tilt on the equipment and its load which is where this inclination monitoring system helps prevent problems by sounding an alarm if a load’s centre of gravity exceeds 6 degrees of lateral inclination.

To increase the efficiency of bridge installation and other heavy loads, the MJS300 jacking cradles are the first combined transport and jacking system which removes the need for falsework temporary structures, reduces the time for execution by as much as 50% and is more sustainable because fewer truck loads are needed to deploy equipment.

TP Handler 2.0 is a more efficient way of transporting large, heavy and tall offshore windfarm transition piece structures. It is a 500 tonne capacity combination of two parallel 14-axle lines of SPMT linked by a structure of beams and large forks which can be operated by one person.

The latest version of the company’s crane control system, LICCON3, has a new software and programming language, is faster, has more storage and includes features to help in future-proofing it, for example, fleet management and telematics functionality, plus the new cabin received a Good Design award.

The wind turbine transport blade lifter type BladeMax1000, rated at 1,000 tonne-metres, has the capacity to carry blades more than 75 metres long and tilt them up from one end to clear obstacles, very often the worst of which are encountered in the “last mile” of a delivery route.

Instead of reinforcing the existing all terrain crane carrier cab design to meet new regulations on crash behaviour, the opportunity was taken to go further with a new design that also offers improved layout in terms of ergonomics, comfort and visibility while also being adaptable to suit ten models.

Assisted reality solutions is a remote service technology to help a technician on site with a crane to transmit visual and machine data back to a factory specialist, live in real time, so they can assist with fault diagnosis, service recommendations or a multitude of other things, in a more sustainable fashion than also having to attend site.

The Tetraspar Floater is a vast (66 x 55 x 36 metre) triangulated pyramidal tubular steel wind turbine base structure weighing 1,250 tonnes. In the face of a series of challenges to move it from quay to barge, a total of 52 axle lines in two sets of 2x8 and one set of 2x10 axles, were used in angle formation, i.e. not all parallel to each other.

A total of 84 axle lines of SPMT, four climbing jacks, overbridges and saddles were employed in a 6 km move for a 75 metre, 800 tonne yacht hull. The route included obstacles such as road signs, traffic lights and narrow streets but the most challenging was a low highway bridge requiring the addition of lowering saddles with hydraulic climbing jacks front and rear to get under it.

Challenges on the Ile Seguin bridge installation project using 82 axle lines of SPMT included the bridge, in two sections weighing 1,715 and 525 tonnes, being assembled on an island 10 metres above the water level, and the closest the barge could get to the quay left a 15 metre gap to fill for the bridge transfer.

The new 73 metre, 660 tonne, arch bridge at Köthen in Germany is part of a large infrastructure project where the closure of seven railway lines was one element putting pressure on the available installation time. In addition to 2 x 12 lines and 2 x 10 lines of SPMT with the Modular Support System, the job involved a 600 tonne crawler crane, 1,200 tonne cube jack system and 600 tonne climbing jacks. 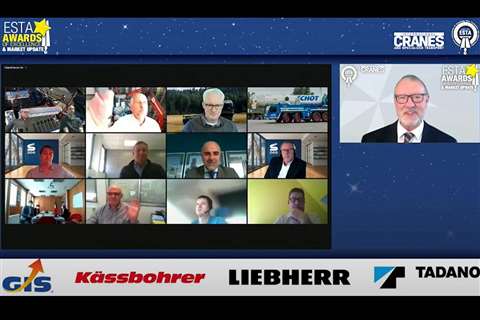 Video of online ESTA Awards & Market Update
View the full recording of the two hour event, including the keynote address by Jens Ennen of Tadano 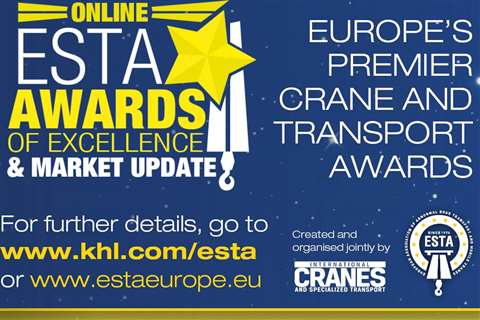